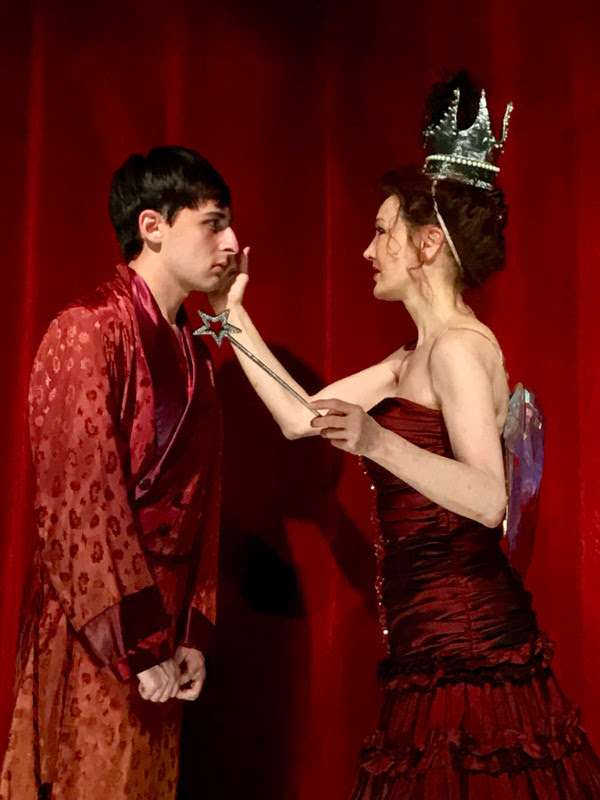 The double plot parallels scenes from Tchaikovsky’s life (as he fulfills his commission to compose music for the Russian Imperial Theatre’s ballet of Casse Noisette) with the life of the fictitious Joe Jessup, an earth science teacher in twenty-first century Spokane, Washington.  The piece dramatizes the struggle of both men to come to terms with their homosexuality, which they have strived mightily to keep secret.  In addition, the playwright attempts to interpret Tchaikovsky’s music (which he claims to have heard a thousand times) as explained by Joe, who, like Whistler, is obsessed with the composer’s work.  Joe analyzes different sections of the Nutcracker score for his latest boy toy, while Tchaikovsky, explaining his need to write Romantic compositions that express human feeling, argues with his brother, Modeste, about why he doesn’t want to waste his talent on a meaningless ballet that is merely “the waking dream of a confectioner.” As if that were not enough material for several plays, there are reflections about earth science and the state of public education.  Furthermore, a dancing Sugar Plum Fairy, accompanied by her consort, attempts to summarize the plot of the ballet and its possible endings, to offer an epilogue about the conflicting versions of Tchaikovsky’s death, and to express her philosophy that one’s life cannot be lived “on point” without someone to hold you up:  only love can restore the ugly Nutcracker back to a handsome prince.

Perhaps there is a significant connection between the uncle in the fairy tale whose young nephew is the Nutcracker/prince, and Tchaikovsky, whose liaisons with his own young nephew and with the nephew of a powerful Russian Duke played major roles in the maestro’s final years.  Fascinated by the composer’s struggle with his homosexuality, Whistler asserts in an interview with Joseph Dalton for the Times Union that his mission is “to depict the lives of contemporary gay men with humor, honesty and dignity.”  But in  highlighting the difficulties faced by both Tchaikovsky and Joe on account of their sexual orientation, Whistler underplays their predilection for underage boys.  This fact undercuts the idea that these good men, with whom we sympathize, were victims of bigotry, given that pederasty was and still is a crime.  Indeed, Tchaikovsky decides to write the ballet because of its depiction of beautiful, innocent children.

Led by a mesmerizing performance by Jason Guy as both Joe and Tchaikovsky, the five talented cast members play roles in both the nineteenth and twenty-first centuries.  Jennifer Anderson’s costumes: beautiful, functional, and fittingly representative of each time period, make it easy to distinguish each character.  Not only does Guy’s gray cutaway indicate Tchaikovsky, but so do the actor’s voice, manner, his physical appearance– arms akimbo and sideways-facing posture—and his emotional outbursts.  Joe, with his gray shirt and bow tie, is quiet-spoken, meticulous in his habits, not wanting to call attention to himself, living in a state of withdrawal and isolation.  Keeping these two men separate is hard enough when Guy moves from one role to the other in successive scenes, but it must be doubly difficult to portray each of them when the time periods occur nearly simultaneously.  This pas de deux with one performer is miraculous.

Nancy O. Graham offers a wonderfully comic portrayal of Antonietta Dell’Era, a principal dancer with the Imperial Ballet.  We next see her as a fellow teacher in Joe’s school, cautiously trying to break through the wall Joe has built between himself and the world, resulting in a heartbreaking confrontation.  Jason Kellerman plays both Tchaikovsky’s brother Modeste, who manages and protects the composer, and a physical education teacher, distinguishing himself in each role (not to mention a comic turn as the consort of the Sugar Plum Fairy and Modeste’s impressive sleight-of-hand maneuvers).  Serena Vesper is both Tchaikovsky’s sad and sickly sister Sasha who can hardly move as the result of a terrible accident, and the agile and graceful Fairy, a gorgeously-costumed ballerina.  Finally, Bradley Levine plays Blaine, the male prostitute picked up first on the phone and then in person by Joe, and Tchaikovsky’s upper class nephew Bob.  By means of costumes, diction and demeanor, Levine enables us to easily identify each character.

John Sowle, the Artistic and Managing Director of Bridge Street Theatre, serves as director and designer of Casse Noisette.  The challenges he faced in producing this play include the creation and use of a thick red velvet curtain across the entire stage (described in the script) with a painted proscenium arch surrounding it; multiple moving set pieces (including a kitchen in the teacher’s lounge with a working microwave oven) and rapid costume changes;  two completely different time frames; seven footlights, and a painted backdrop upstage to represent the Candyland of the ballet (though the playwright requested a fully-realized candy landscape!).  Sound designer Carmen Borgia not only supplies the sounds of the imagined audience during Tchaikovsky’s concerts and the sound of the school bell ending each class (accompanied by the sounds of students moving through the hallways), but also underscores most of the production with Tchaikovsky’s music, while locating exactly the right segments of his work as they are discussed by the characters.

Bravo to Sowle for choreographing the changes between time periods and scenes so efficiently that there is never a delay, despite characters entering and exiting from between the curtains and the wings, and large set pieces moving backstage while scenes take place in front of the curtain!  The director finds both the humor and the pathos in this play, often changing on a dime.  But despite his considerable skill and best efforts, Sowle is stymied by Whistler, whose overwritten play runs two and a half hours (including intermission).  Every scene could use judicious cutting and some could have been excised.  Brilliant ensembles, such as the one in which Graham, Kellerman and Levine imitate the sound of the celesta as they sing the Dance of the Sugar Plum Fairies, are eclipsed by the sheer weight of the script.

Still, Casse Noisette presents an original concept and scintillating performances.  One hopes that like many World Premieres, the play will be revised and abridged to its benefit.

Casse Noisette runs from November 8—18, 2018 on Thursdays, Fridays and Saturdays at 7:30 pm and Sundays at 2:00 pm at the Bridge Street Theatre. Tickets may be purchased online at casse@brownpapertickets.com or call 800-838-3006.