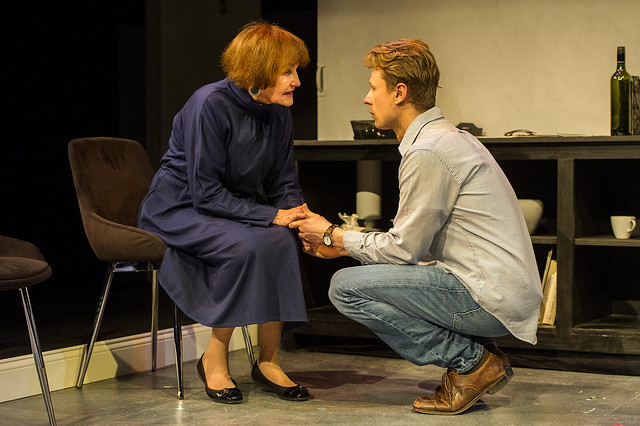 Kenneth Lonergan’s play The Waverly Gallery had its off-Broadway debut in 2000 and was a finalist for a Pulitzer Prize the following year. It dramatizes the story of Gladys Green who, over a two-year period, slips from mild senility to full-blown dementia. The original production and the recent revival, which brought Elaine May back to Broadway after a 50-year absence, obviously had an emotional effect on audiences and reviewers. The current offering at Shakespeare & Co. in Lenox, Massachusetts, however, is more labored than profound.

Directed by Tina Packer, the founder and former artistic director of the company, the first act works fairly well. Gladys, a lawyer and activist when younger, is now the owner of a small unprofitable art gallery on Waverly Place off Washington Square in Manhattan. We meet Gladys (Annette Miller) and her grandson Daniel Reed (David Gow) at lunch. Her failing memory is obvious, but she is still in touch with reality. Their conversation is primarily expository and Gladys’s tics, repetition of comments and questions, and her search for memories, though comic, effectively foreshadow her slow decline.

In addition to the main thematic thread, the play also focuses on the effect the disease has on Daniel, his mother Ellen Fine (Elizabeth Aspenlieder) and step-father Howard Fine (Michael F. Toomey.) Through a series of monologues directed to the audience, Daniel informs us of Gladys’s disintegration and the family’s angst. Don Bowman (David Bertoldi), an inept artist, shares Gladys’s delusional dreams. She allows him to live in the back room of the gallery as he prepares for a longed-for art show. It is soon revealed that the owner of the gallery’s property intends to take it over and turn it into a restaurant resulting in even more severe consternation.

Though the subject matter is what is important in this play, the script is repetitive. Oftentimes characters comfort Gladys with the same expressions or repeatedly complain to each other about her behavior and/or needs. A number of dialogue sequences overlap preventing the audience from clearly understanding what is being said. These elements may be found in real life, but on a stage, especially with the number of times it occurs in this production, it is problematic. This may be the director’s choice. The set changes, eat up a lot of time. The cast, especially in the second act, occasionally over-acts; comforting embraces, for instance, are held for an extended amount of time as are occasional silences.

Playwright Lonergan has based Gladys on his grandmother. Annette Miller’s performance as Gladys rings with truth as many of us can probably verify from personal experience. Her descent into the disease is skillfully portrayed and her pain is real. Daniel deals with his grandmother more often than the others and David Gow’s performance is very sensitively played; he is supportive and tender until, unable to withstand Gladys’s constant demands, he is finally engulfed by emotional turmoil. Aspenlieder and Toomey effectively portray the frustration and anger provoked by the helplessness they encounter. David Bertoldi’s inept artist Dan Bowman is the most compassionate of the people in Gladys’s life and he plays it with great sincerity. His inability to accurately assess his talent mirrors Gladys’s unreal expectations to find a job and live on her own.

The set, basically black and white, designed by Juliana Von Haubrich is an open space with several chairs, a sofa, and a table that is taken offstage and reset several times. The upstage wall rotates to delineate different locations. As mentioned above the numerous scene changes take a goodly amount of time. The lighting by James W. Bilnoski is unobtrusive as is Brendan Boyle’s sound. There is a puzzling choice by costume designer Elizabeth Rocha. Gladys and Don change costumes as time goes on, while Daniel, Ellen and Howard wear the same costume from beginning to end.

Director Packer has effectively mined the humor in the play to help contrast with the harrowing and heartbreaking situation the characters face, but it could be even more effective if the production were tighter.