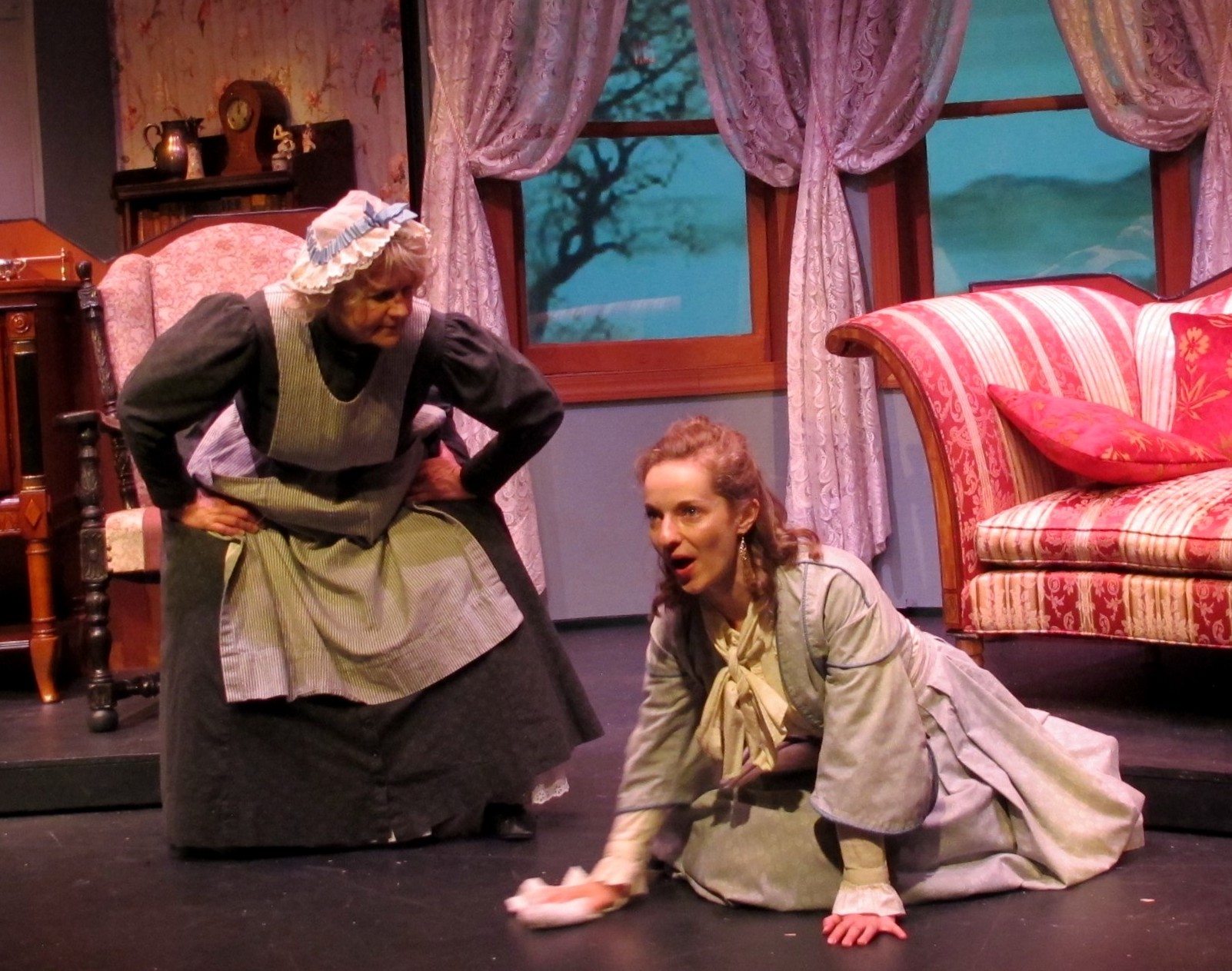 Jen Silverman is a very provocative playwright whose plays are set in world wide locations mirroring her own extensive living experiences in other lands.  Silverman’s various styles and themes lend her canon of work a certain amount of intrigue.  That is the case with The Moors currently at Bridge Street Theatre in Catskill, New York.

This take-off of mid-19th century novels and stories, by the Brontes, Conan Doyle and DuMaurier focuses on a gothic amalgam of strange characters.   Spinster sisters live in a secluded mansion on the moors of England  (Wuthering Heights!); Agatha’s (April Armstrong) severe persona dominates Huldey (Molly Parker Myers,) who is more than a little ditzy and spends hours writing in and talking about her diary.

Their depressed pet Mastiff ( Hound of the Baskervilles) (Shane Sczepankowski) mopes about the house and moor spouting mournful philosophy.  Yes! the dog is played by an actor.  They have a house/scullery maid (Rebecca) who is identified as either Marjory or Mallory (Lori Evans) depending on where she is and what bonnet she’s wearing.  Marjory is pregnant, probably by the master of the house whom we never meet, while Mallory suffers from typhus.  The women are awaiting the arrival of a governess (from Jane Eyre) though there is no evidence of a child in the household.

When Emilie (Kate McMorran) arrives she refers to letters she’s received from Master Branwell (the name of the  Bronte’s brother) in negotiation for the position.  When Emilie requests to meet him Agatha says he is dead and that there is no child.  There are evidently many secrets hidden by all the women.

In a seemingly parallel plot, The Mastiff is roaming through the moors trying to commune with God.  When A Moor Hen (Bonnie Black) descends in front of him he instantly believes his prayers have been answered.   As they continue to meet through the next several days they develop a loving though somewhat tenuous relationship.  The characters, however, are not truly necessary to the plot line though they do represent the wild savagery that the moors inspire.

This set-up, bizarrely written and played, invokes laughter in the opening scenes, but as the play evolves a serious tone is introduced to work in tandem with the comic elements.  The thematic threads of alienation, love and hate, change, and human needs intertwine in a surreal series of events.

Tracy Liz Miller’s direction of the production, seen at a preview, is uneven.  A number of laugh lines don’t work because of the timing of the delivery and/or intonation.  The play could use more foolery especially in the opening scenes and to underscore the outlandish behavior that occurs in the latter part of the play. This should improve as the cast becomes more comfortable and the pace accelerates.  As Agatha, Ms. Armstrong plays evil convincingly until she allows her softer but still controlling side to emerge.  The somewhat batty Huldey of Ms. Myers is a stitch even when she becomes inflamed with hatred.  Emilie, the oblivious governess, is sweetly and naively played by Kate McMorran.   Lori Evans’s schizophrenic several maids is at first subservient, but her dark side emerges as she convincingly becomes the leader of the pack.  The audience immediately warms up to Shane Sczepankowski’s dispirited but charming Mastiff and Bonnie Black’s Moor-Hen matches his appeal though it is tempered by her well-delivered sarcasm.  The cast works well together and are aware of where Silverman wants to go.

John Sowle, the theatre’s artistic and managing director, has designed the sets and the lighting.  The two sets, the living room in the mansion and the moors, capture the mood of the work, but the scene changes, of which there are many, take time and are awkward.   His lighting, however, enhances the production.  The costumes by Jennifer Anderson are of the period though Huldey’s change of character is epitomized by her change of clothing.  The Mastiff and Moor Hen are clever.  The sound design by Steven Patterson is appropriate, though it could be more haunting in the last scenes.

The production has weaknesses, but it was seen at a performance when the cast was in front of an audience for the first time.  All involved are professionals which should help mitigate the problems.

The Moors is an often funny and touching theatrical experience.  Bridge Street continues to produce stimulating theatre of ideas and reflections of the human condition.