REVIEW: “The Goat or Who is Sylvia?” at the Berkshire Theatre Group 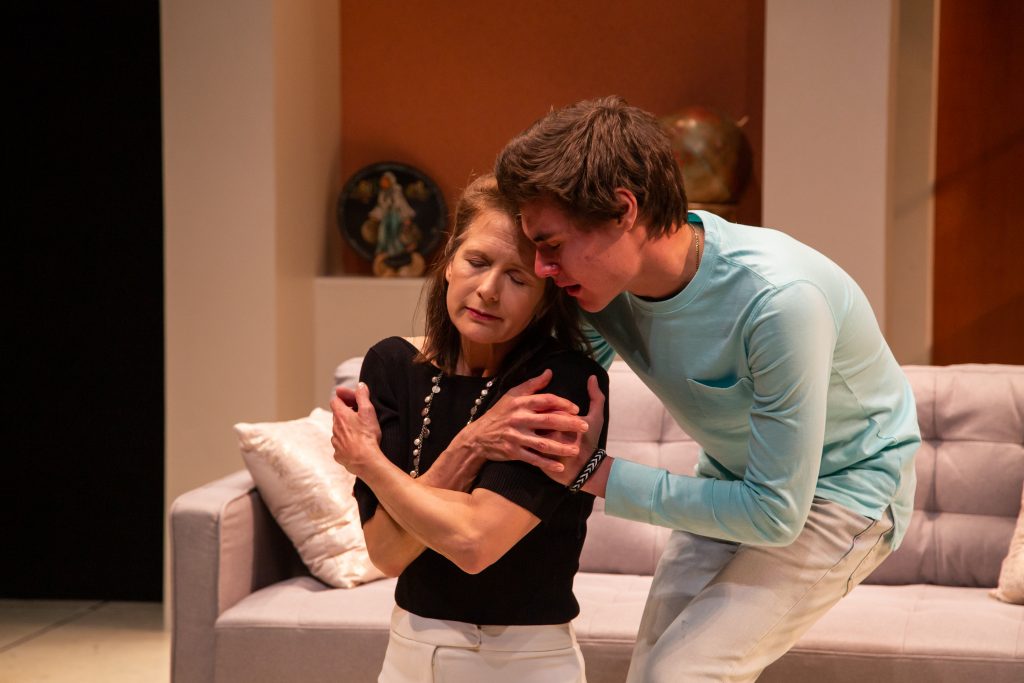 REVIEW: “The Goat or Who is Sylvia?” at the Berkshire Theatre Group

Love is love, and the heart wants what it wants. But are we really willing to follow those sentiments to their ultimate conclusion?

At the start of The Goat or, Who is Sylvia?, Martin and his wife Stevie are milling around their tastefully appointed Manhattan apartment, waiting for someone to come interview him.  Just turned 50, Martin has much to brag about: a prestigious prize for his achievements architecture, and a new gig designing a multi-billion dollar city. But he’s distracted, anxious, forgetful.  He jokes about Alzheimers, but it eventually emerges, as he talks to his interviewer, that the problem is something else. He’s having an affair. With a goat.

This absurd premise is played both for broad laughs (and there are many) and for sharp explorations into our beliefs about love. What do you do when something beyond your worst imaginings happens?  The Goat, now playing at Berkshire Theatre Group in Stockbridge, asks and mostly answers that question.

Martin (David Adkins) tries to tell Stevie (Jennifer Van Dyck), but the truth only emerges when Stevie has gone out and left him to the interview, conducted by his long-time best friend Ross. Martin can’t concentrate, and confesses his distraction is caused by love. He adores his wife and has never had an affair before, but when exploring the countryside to find a weekend home for them, he spotted…her.  Ross is horrified when Martin finally shows him a photo and soon writes to Stevie, telling her the whole story.

For the play to fully work, Martin has to earn our sympathy–our disgust should be tempered with at least some understanding. We have to feel his love for his beloved and for his family.  Martin knows bestiality is considered wrong so he joins a support group, but he feels different from the others: his love isn’t the product of trauma, it’s pure and seems perfectly right to him – he feels no shame.  Adkins, well known to Berkshire theater-goers, never winks at the audience: he is completely sincere.

The play rises to yet another level when the superb Jennifer Van Dyck is on stage. Stevie loves Martin; she’s still hot for him; she’s warm, funny, and in complete mastery of her life, until now. She sustains a level of rage and disbelief, including at least one very long monologue – her performance is an absolute tour de force. She delivers the blazingly witty language with ease and smashes most of the fine pottery on the shelves with satisfying conviction.

As Martin’s lifelong best friend – and now, betrayer – Josh Aaron McCabe is sardonic and angry; it’s hard to feel the decades-long connection between the two characters.  Like Van Dyck, Evan Silverstein as Martin and Stevie’s son Billy (really, Billy? What exactly was Albee doing there?) is in a state of extreme distress, in tears for just about every moment he’s on stage.

Billy is gay, and while his parents think of themselves as good liberals, accepting of their son, Martin hurls some pretty nasty epithets his way when he’s at his most emotionally exposed. This play was written at a time when a common argument against gay marriage was, essentially, “what’s next, marriage to animals?” and perhaps with this play Albee, himself gay, was saying, “well, you want to talk about that? Let’s go there!” Indeed, when Martin defends his love for the goat, essentially saying, the heart wants what it wants, he finds more acceptance for his son in turn.

After well over an hour of yelling with no intermission (after a while, variations on the phrase “goat f$*%#er” loses its power to amuse or shock) both Billy and Stevie push the action – well, it was already over the top after the first five minutes, so they push it off a cliff.  The play is a combination of farce, horror show and treatise on tragedy, and while it’s not perfect, it’s an evening worth seeing, especially for the incandescent Van Dyck.

The Goat or, Who is Sylvia?, be Edward Albee; Director: Eric Hill,