REVIEW: “The Fantasticks” at Silverthorne Theater 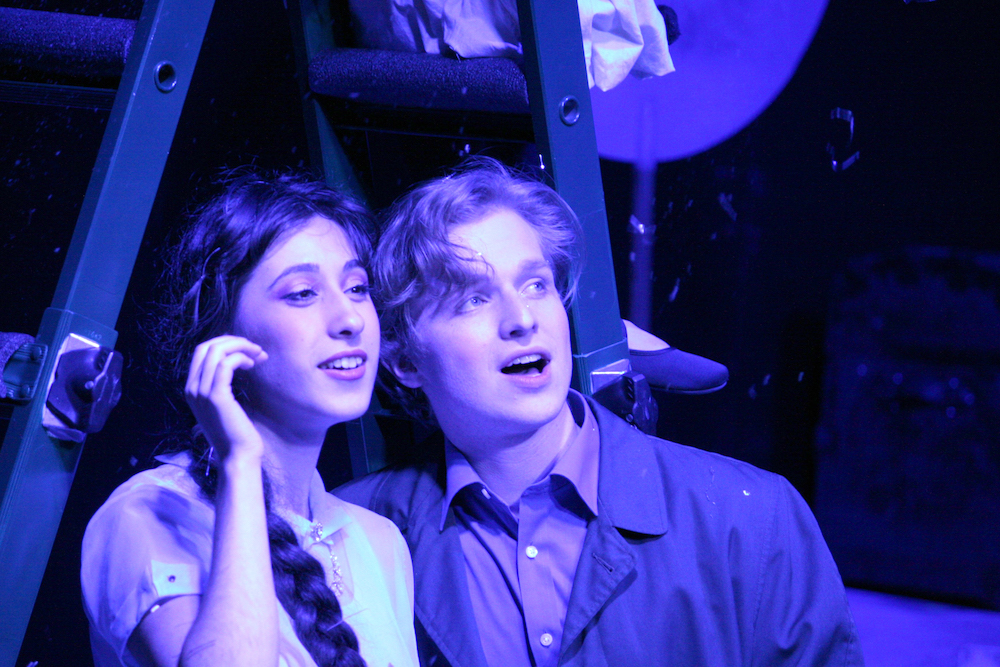 REVIEW: “The Fantasticks” at Silverthorne Theater

Don’t gore my ox, and I won’t gore yours. If I criticize the musical The Fantasticks, you may react with as much hostility as I did when I read the recent takedown of Hamilton in The Nation, in which the writer accused Lin-Manuel Miranda of glossing over the founding fathers’ slave ownership, and took swipes at his lyrics at the same time. Really?

I managed to miss seeing The Fantasticks in its original 40-year off Broadway run and nine-year revival, nor did I grow up with the cast album, so this was my first encounter with it. I wasn’t wowed by it but can appreciate why it’s so loved, so often performed, and why so many in the audience at the Silverthorne Theater in Greenfield were smiling and bobbing to songs they clearly knew by heart, performed by a strong and appealing cast.

On mostly bare stage, set only with a platform, a ladder and a trunk or two, a Girl and a Boy have fallen in love, despite a feud between their parents.  Only their parents (usually fathers but here played by women) are not feuding – they are in cahoots, conspiring to get their children together by telling them they must not.  I capitalized Girl and Boy because all the characters are clearly classic types in the commedia dell’arte manner, used to both tell the story and comment on its absurdity at the same time.

The host of the evening, played with a warm twinkle and firm baritone voice by Larry Picard, sets the scene, offers some commentary, and starts things off with the song that became the best-known standard from the score, Try to Remember.  Though on the surface, it’s sweetly nostalgic, the song warns you not to take the initial love story at face value and to beware the complexities to come: without a hurt the heart is hollow.

As Luisa, Jasmine Goodspeed has a sweet voice and effectively finds the needy, wanting side of a girl who wants to be special, not ordinary.  Andy Zane is charming if a bit bland as Matt, the Boy, and his voice is strong and appealing. She looks like a young Mayim Bialik; his blond hair and and eager innocence bring to mind Cary Elwes in The Princess Bride.  Autumn Tustin and Stephanie Carlson as Bellamy and Hucklebee worked hard to bring out the comedic elements – perhaps too hard. It wasn’t until John Reese as an ageing Shakespearean actor, and and David Cavallin, his jester-like sidekick, emerged from an old trunk that the wit of the script felt natural, not overdone.  Their more relaxed, yet utterly absurd, shtick made me forget — almost forget — that their characters exist to stage a “rape” – here, an abduction, not sexual violence, but the word is repeated multiple times, gratingly. I wonder how it struck theatergoers in 1960, but today it just – doesn’t work.

The jazz-inflected music was ably provided by Ted Trobaugh on piano, and the lively fight choreography, involving colorfully painted wooden swords and many amusingly theatrical stabbings, was by John Iverson.

Act One’s happy ending is a red herring – the lovers must be “burnt and burnished by the sun,” and seek further, not always pleasant, adventures apart, before (spoiler alert) finding their way back to each other in the end.  The cast brings it home with energy and commitment.