REVIEW: “The Night Alive” at the Chester Theatre Company 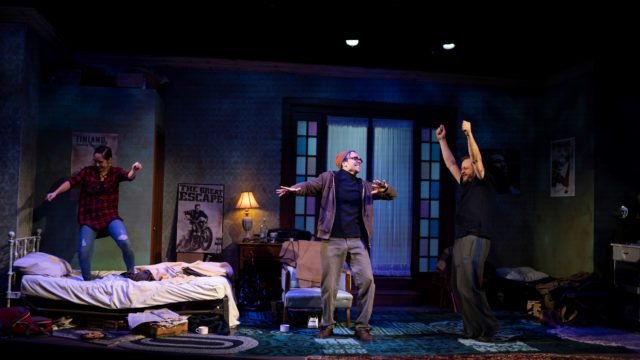 REVIEW: “The Night Alive” at the Chester Theatre Company

The Night Alive by Conor McPherson is the story of five Dubliners bumbling through life and often at odds with one another.  McPherson, the award winning playwright of Shining City, The Seafarer, The Weir and many others, has an ear for realistic dialogue full of incomplete sentences, broken phrases and the lilt of his native Irish intonations.  The play’s New England premiere at the Chester Theatre Company in Chester, Massachusetts, is respectful of McPherson’s expressive style in this haunting work.

The play opens as Tommy (Justin Campbell) assists Aimee (Marielle Young,) into the thoroughly unkempt room he rents in his uncle Maurice’s (Nick Ullett) house.  Her face has been bloodied in an altercation with a man she says she doesn’t know.  Tommy tenderly cleans her up and insists she spend the night there to recover from her trauma.  The one night turns into several days.

The next day Doc (James Barry,) who is described as being “disabled,” arrives asking for a place to live since his sister’s boy friend has, once again, thrown him out of their house.  After bantering back and forth Tommy gives Doc 30 pounds and we are assured of the warmth that exists between the them.  Several days elapse as the play settles into a domestic comedy/drama, then Kenneth (Joel Ripka) appears and lives change.

While  several scenes in the play are somewhat episodic and have a tenuous relation with the preceding or following scenes the events build the arc of the play into an ambiguous and provocative conclusion.

The acting is uniformly excellent.  Campbell as the sensitive Tommy lumbers around his  room displaying a latent sensitivity toward Aimee and Doc and intense anger as he argues with his ex-wife about their two children.  He gets laughs and empathy as he deals with the frustrations of his life. James Barry assumes the mien and physicality of Doc’s mental disability.  In a touching performance he has the audience laughing with him, not at him, as he receives their compassion.  Aimee, a sometimes prostitute, is a difficult character to like as she is very private, but Ms. Young has found qualities that allow us to understand her.  Her performance is subtly textured.

Nick Ullett’s Uncle Maurice is pompous and irascible when sober and almost pleasant when inebriated.  Actually, the uncle is of minor importance to the major incidents in the plot, but Ullett makes the most of his several scenes by supplying information of Tommy’s past.  When Joel Ripka’s Kenneth enters it is obvious that, despite his charm, there is an aura of danger encompassing him.  His transition from bonhomie to violence is smooth and occurs incrementally.

Direction by Chester’s artistic director Daniel Elihu Kramer is economical; there are no wasted movements or moments.  His actors bring their characters to life with sensitivity and insight.  The grimy room designed by Ed Check is claustrophobic, adding to the conditions that govern their actions and emotions.  Charles Schoonmaker’s costumes identify the social status of the characters and the lighting and sound by Lara Dubin and Tom Shread respectively underscore the various tones of the play.

The Night Alive is an interesting play on many levels and this production is perceptive in interpreting McPherson’s script and is intelligently directed and acted.  Chester opens its 30th season with the excellence that has become a hallmark for this intimate theatrical space.