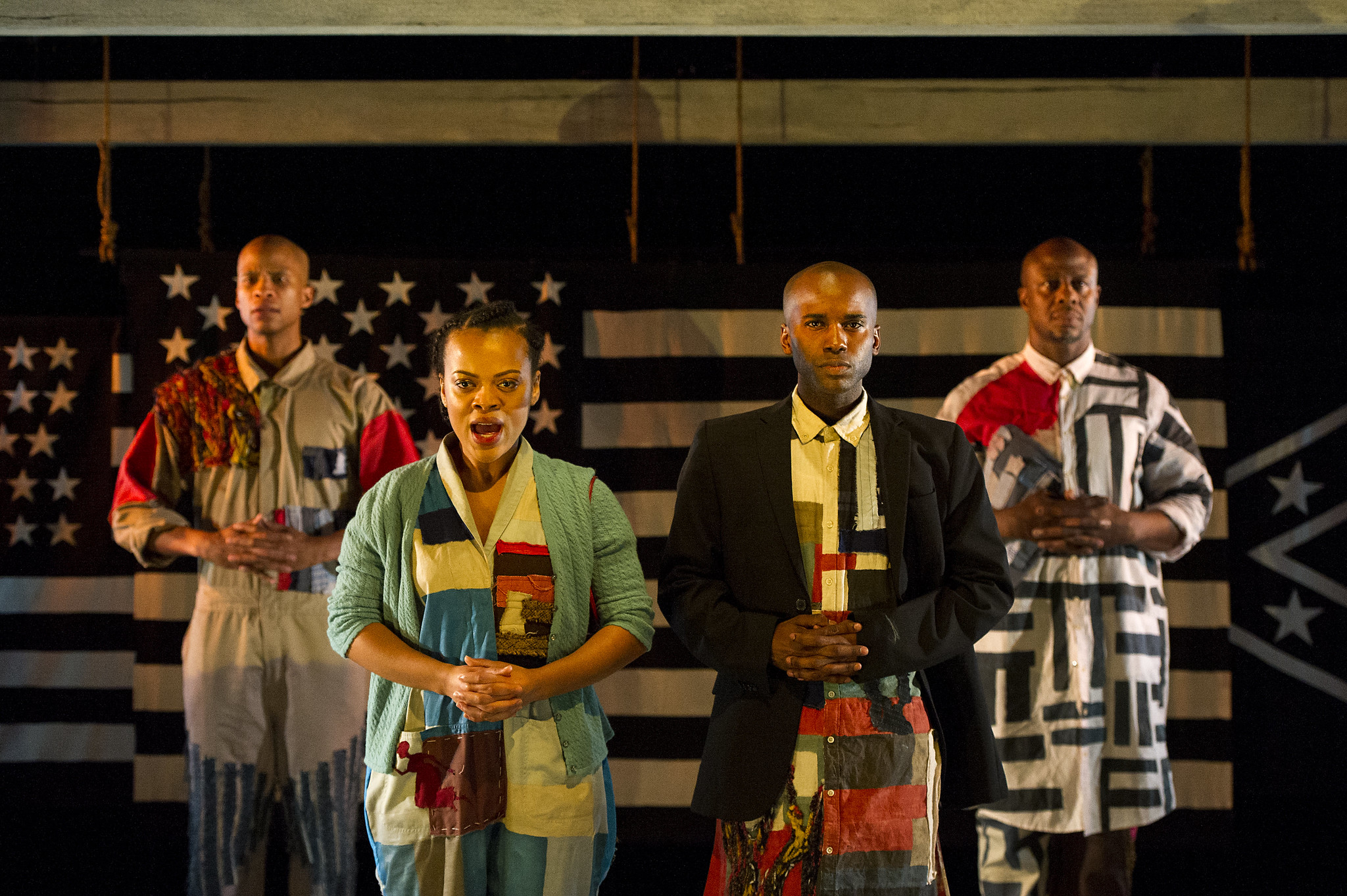 The Berkshires as a summer destination attracts visitors who want to escape the heat, seek cultural enrichment, and bask in outdoor activities in beautiful surroundings.  One might assume that theatrical offerings would cater to the wishes and expectations of this part-time audience.  But Artistic Director Julianne Boyd, in her 25th year as the head of Barrington Stage Company, has another goal:  to produce new plays that “need to be heard . . . that tell us more about ourselves and the world we live in today.”  To that end Barrington Stage has sponsored (with the help of Bonnie and Terry Burman) a national new play contest, offering a reward of $25,000 and a World Premiere production at BSC’s St. Germain Stage.  This year’s winner:  Stacey Rose’s America 2.1:  The Sad Demise & Eventual Extinction of the American Negro.

This play, a futuristic dystopia, is decidedly not typical summer fare.  In a play-within-a-play, a troupe of four African-American actors perform a revisionist history of the American Negro in four chronological parts, which essentially maintains that the “demise of the American Negro was brought about by his own hand” and “by his own actions,” despite the loving care and “noble efforts of the American government and American culture.”  Resurrecting the minstrel show style of the nineteenth and early twentieth centuries, the playwright deploys outrageous caricatures ostensibly to demonstrate, using song and dance, how the Founding Fathers saved the African savages. Minstrelsy, a sad chapter in the history of the American theatre, has been put to ironic use in the recent past.  In Spike Lee’s film Bamboozled  (2000), a black TV writer creates a series of minstrel shows that surprisingly turn out to be a hit.  Kander and Ebb’s The Scottsboro Boys, based on the trial of nine young black men falsely accused of raping two white women, presents its story in the form of a minstrel show. And Pulitzer Prize winner Suzan-Lori Parks (author of Topdog/Underdog, which will be seen this summer at Shakespeare & Company) often uses clownish stereotypes in her attempt to uncover the forgotten history of African-Americans (The Death of the Last Black Man in the Whole Entire World).

But most surprising and unsettling in Rose’s play is what happens backstage between the various parts.   The play takes place in the “not too distant future,” in which the actors, who are clearly aware of the untruthfulness of the history they present, are forced by an authoritarian regime to perform this script ten times in twelve hours, six days a week, or suffer unspecified consequences.  In chilling voiceover announcements the presumably white audience is warned against documenting what is seen onstage, and, what is worse, advised when to disengage the safety locks on their firearms.

Rose’s play is well-served by Logan Vaughn’s brilliant direction, with the help of a crackerjack team of artists.  Choreographed by Kevin Boseman, the play-within-a-play moves with speed and high energy from African dance to hip hop.  Set designer Jack Magaw solves the problem of presenting onstage and backstage scenes, which would normally require a revolving stage, by closing the white curtains during the backstage scenes and opening them for the four-part show.  By providing shelves and closet space to the left and right of the stage, Magaw allows the actors to change costumes in view of the audience.  And, speaking of costumes, Ntokozo Fuzunina Kunene’s colorful and often comic creations are terrific.  Stacey Rose has carefully chosen songs that make a powerful statement and Sound Designer Luqman Brown’s deft handling of music and the recorded Voice are essential to the effectiveness of the play.   The sudden appearance of flags (often black and white) that delineate eras and beliefs, accompanied by split-second lighting by Cha See, can be shocking. Vaughn’s staging is generally flawless, except for a few backstage moments that seem to be drawn out needlessly, slowing down the action.

Though the team of four actors comprise a tight ensemble playing multiple roles onstage, each one creates a distinctive characterization in the backstage scenes.  Peterson Townsend as Jeffery, is touching as he longs to return to his son.  We cheer him on when he stands up for his rights, though we realize that his resistance is useless.  Jordan Barrow, as Grant, a young dreamer and wonderful singer, is confused by Kalyne Coleman’s Leigh, who tries to convince him to connect (“couple”) with her so that they will receive better rations and treatment.  Coleman’s comic turn as a self-help guru adds welcome humor to the play.  Ansa Akyea as Donavan, the leader of the troupe, is both heartbreaking and cruel, having to keep his charges in line while pleading for their safety.  It is fascinating to watch the members of Akyea’s troupe going off script (though we don’t know what the script says) as they struggle against the roles they must perform.  Peggy Pharr Wilson provides an officious and frightening Voice, imposing discipline (and sometimes violence) on the hapless performers.

In a conversation at the St. Germain Stage on June 16th, playwright Stacey Rose, deploring the fact that history is taught in the U.S. through a white supremacist lens, asked the audience to share their memories of the first time they realized there was a split between how whites versus blacks experience America.  Acknowledging that it is uncomfortable to do the right thing, Rose clearly wants to encourage us to not only talk about this issue but hopefully step up and do something about it.  If this play helps to begin that conversation, it will have succeeded.