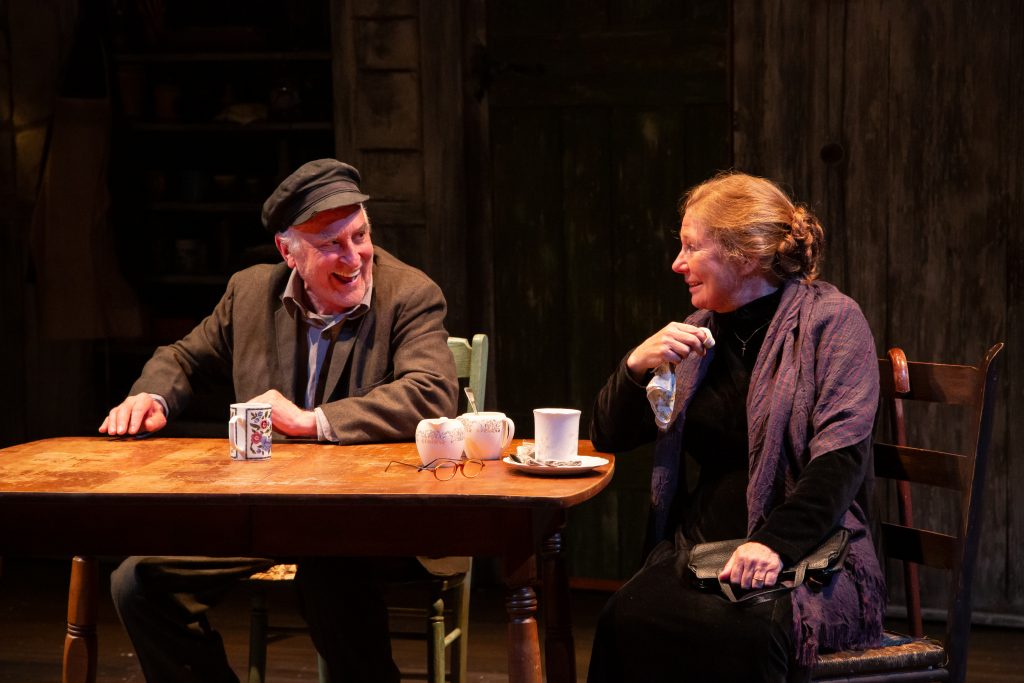 We have often heard that good casting is responsible for 95% of a play’s success. That is especially true for Berkshire Theatre Group’s Outside Mullingar by John Patrick Shanley. The play was directed by Karen Allen, who has had a successful acting career for forty years in theatre and film. Allen worked with three of the four cast members in past productions and knew
how perfect they would be for this play. The fourth, Shannon Marie Sullivan, walked into an audition and rounded out the cast. The result: a performance for the ages in a play that is both funny and moving, grabbing the audience from the beginning and never letting go.

Shanley won a Pulitzer Prize and Tony Award for his play Doubt and an Academy Award for Best Screenplay for his film Moonstruck. His work has wowed audiences for years. Outside Mullingar takes place in rural Ireland from 2008-2013 on two adjoining cattle and sheep farms. Tony Reilly (Jeffrey DeMunn) and his son Anthony (James McMenamin) live on one of the
farms, in a filthy, broken down house that would have embarrassed the deceased Mrs. Reilly. The play begins on the day of their neighbor Christopher Muldoon’s funeral. His widow, Aiofe Muldoon (Deborah Hedwall) and her daughter Rosemary (Shannon Marie Sullivan) have been invited for tea by Anthony (contrary to his tightfisted father’s wishes). As soon as the necessary sympathy has been expressed, a series of longstanding arguments begin about a narrow strip of road sold years earlier by Tony to Christopher that blocks the Reillys access from the road to their house, about who will inherit these farms when the elders pass on, and about why neither of their middle-aged children has ever married. This exposition sets up the remainder of the play, written in six extended scenes that are a workout for the performers and a window into their souls for the audience. The playwright has a strong ear for his Irish characters, evident in the musicality of the dialects (helped by dialect coach Jennifer Scapetis-Tycer), the dialogue that captures each character’s unique voice, and the humor that infuses the script.

In a talk back after a recent performance, Ms. Allen explained that with actors of this caliber, the director’s job is to step back and let them find their own way into their roles. The play blocked itself for the most part, which led to a collaborative, fully organic performance. The two older characters–played by veterans DeMunn and Hedwall—are consummate actors at the top of their game. We could have listened to their banter, their insults, their comic timing, Hedwall’s tears mixed with laughter and DeMunn’s prevarications all night. DeMunn’s Tony is feisty and often cruel to his son, but when he allows his soft side to appear, he can be heartbreaking. Hedwall’s Aiofe has a strong sense of fairness and her quiet, quick verbal jabs at Tony are more devastating than all his bluster. Shannon Marie Sullivan’s Rosemary, who has turned down many past suitors in order to remain on her farm next to the Reillys, has the difficult task of carrying on a nearly one-way conversation with the reticent Anthony. McMenamin is as self- contained and rigid as Sullivan is explosive, a force of nature. Watching her many attempts to
reach him as they constantly dance around each other, Sullivan’s passionate nature bumping up against McMenamin’s almost but not quite impenetrable brick wall, keeps us on the edge of our seats, hoping for a breakthough for these two lonely people.

Allen has gathered a first-rate design team, though set designer John McDermott’s representation of the various scenes sometimes threatens to overwhelm the production. How he makes use of each nook and cranny of the small Unicorn stage is to be commended but when a set change calls attention to itself in a naturalistic play, there’s a problem, even if it’s done in dim light so the audience can watch the pieces of the puzzle be assembled and disassembled. Shawn Boyle’s lighting helps to delineate each area seamlessly and gracefully, dimming the older couple at the table, for example, while outside the younger couple are lit stage right as they shiver in the freezing winter night. Carisa Kelly’s costumes establish place, time, and weather, even adorning the stagehands in the style of the piece. Scott Killian is responsible for the wonderful music throughout as well as the sound of the ceaseless Irish rain (reminding us of the Berkshires this season).

A production of this exceptional quality does not come along every day. Be sure to see it while you can.

OUTSIDE MULLINGAR runs from June 19—July 13. Tickets may be purchased online at BerkshireTheatreGroup.org or call 413-997-4444.