REVIEW: “Into the Woods” at Barrington Stage 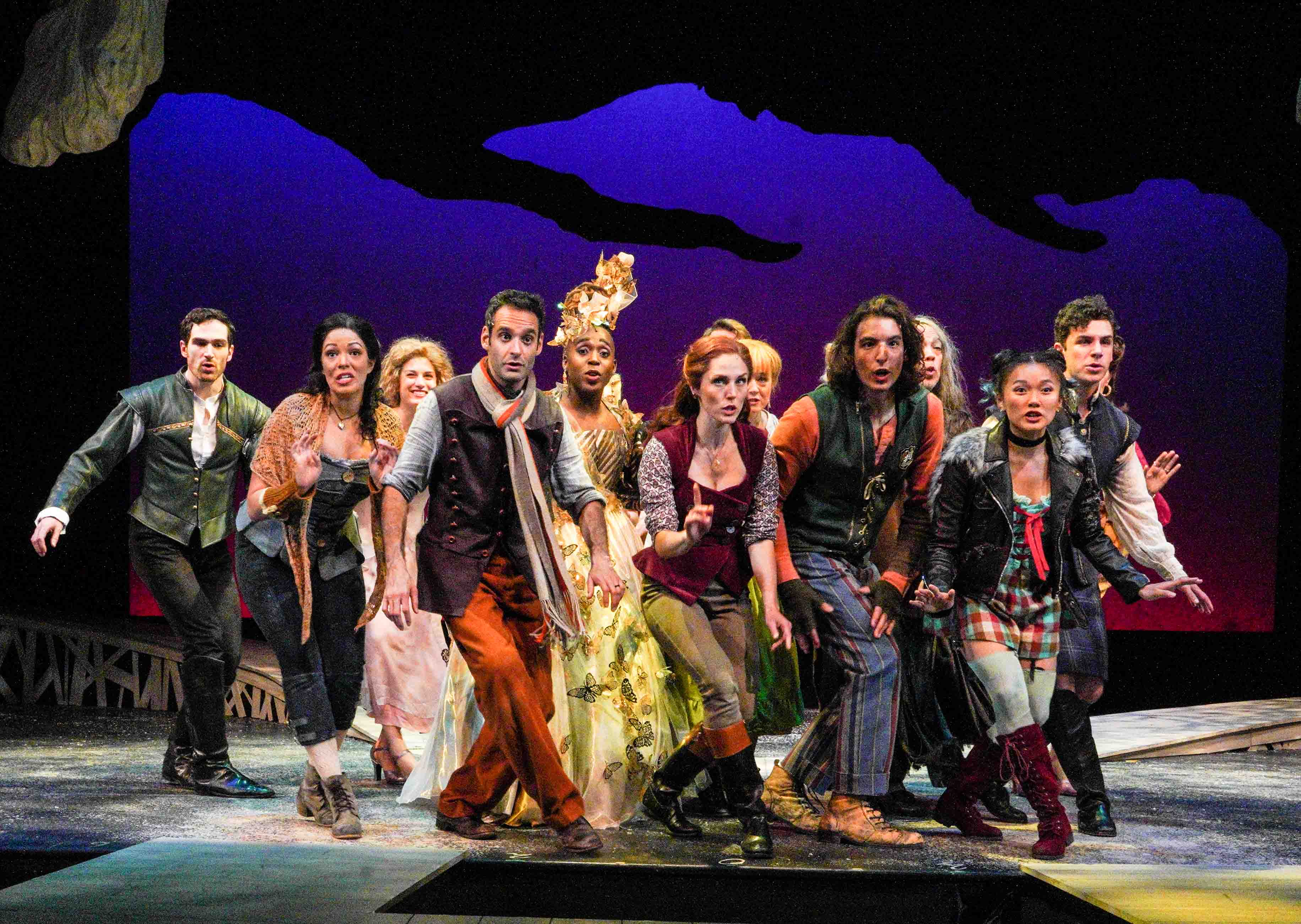 REVIEW: “Into the Woods” at Barrington Stage

As Barrington Stage Company‘s production of Into the Woods opens, we’re presented with a group of fairy-tale familiar characters, including Cinderella (Amanda Robles); Jack (the Beanstalk climber, played by Clay Singer); Little Red Riding Hood (Dorcas Leung), and Rapunzel (Anna Tobin). A dapper narrator (Thom Sesma) draws us into their world, where we also meet The Baker (Jonathan Raviv) and The Baker’s Wife (Mara Davi), as well as an ugly, terrifying old Witch (Mykal Kilgore).

All of these characters are driven by wishes. Cinderella yearns to attend the king’s festival, just like her wicked stepmother and stepsisters, who cruelly mock her. Jack’s beloved cow, Milky White (a puppet brilliantly designed by Brandon Hardy), is unable to provide milk, and Jack’s desperate mother (Leslie Becker) forces him to sell her; his wish is to find a way to get Milky White back. Little Red wishes to buy bread to bring to her grandmother, introducing us to The Baker and his Wife, who poignantly wish to have children. The Witch reveals to the couple that their inability to have children is the result of a curse she put on the Baker’s father for stealing her vegetables. However, she will lift the curse if the couple bring her four ingredients: a cow as white as milk, a cape as red as blood, hair as yellow as corn, and a slipper pure as gold.

Thus the familiar stories intersect, and the characters enter the woods to learn how to make their wishes come true. By the end of Act I, it seems that they have. In Act II, they learn of the darkness and the danger in the woods, and the very mixed blessings of fulfilling their wishes.

Joe Calarco has assembled a splendid ensemble of actors to bring life to this Sondheim masterwork, into which one may find meaning on personal (understanding the unconscious, the effects parents have on their children, the meaning of love and family, the ambivalence that informs every choice we make) and global (the responsibilities inherent in human connectedness, the consequences of ethical behavior)  planes.

Mykal Kilgore, as the ugly witch who eventually transforms from a hideous crone into a regal golden beauty, commands the stage in the best sort of way, with solid presence, a startling performance, and a powerfully beautiful voice. To be sure, a strong ensemble is crucial to the success of Into the Woods, and every member of this dazzling cast shines. Thom Sesma’s Narrator/Mysterious man (some cast members play double roles) brings us two completely different figures who, not incidentally, serve a similar purpose in providing guidance to audience and, later, to characters in the play. Dorcas Leung’s Little Red Riding Hood is a hoot, a tough cookie under a cloak. As Cinderella, Amanda Robles is tender and moving, with a silvery singing voice that, at times, seemed not to enunciate clearly, but gave a lovely performance nonetheless. Clay Singer is a charmingly innocent Jack whose love for his cow is palpable, as is his obedient understanding and love for his mother (the lovely Leslie Becker, who crafted two additional, memorable roles, Granny and the Giant’s Wife, with equal aplomb). Raviv and Davi, the Baker and his Wife, movingly embody their complex relationship as well as the metamorphosis of their partnership.

The music is stunning and often as surprisingly deep as the woods; Darren R. Cohen’s musical direction and conducting were very satisfying. Choreography by Mayte Natalio was elegant and inventive, and Jen Caprio’s costumes were delightfully clever. Into the Woods makes strong demands of the sound designer (Matt Kraus) and lighting designer (Sherrice Mojgani), and Kraus and Mojgani did the production proud. Brian Prather’s scenic design was beautifully executed, and I loved how his set’s journey into expressionism complemented the production.

Into the Woods is not appropriate for young children, and I was pleased to note that Barrington Stage had lobby signs expressing just that, even though some theatergoers did have young ones in tow. Please know that it can be very scary for kids. It is also a long show, two hours and 45 minutes (including intermission). I have no doubt that some of my fellow Sondheim fans will be displeased with my opinion that the show would benefit from some judicious cutting, if only by the master himself. That is not likely to happen. Nevertheless, the show is an important one, and gratifyingly provocative. I’d encourage you to see it while you can.

*Children under the age of 5 are not permitted in the theatre.