REVIEW: “A Human Being, of a Sort” at the Williamstown Theatre Festival 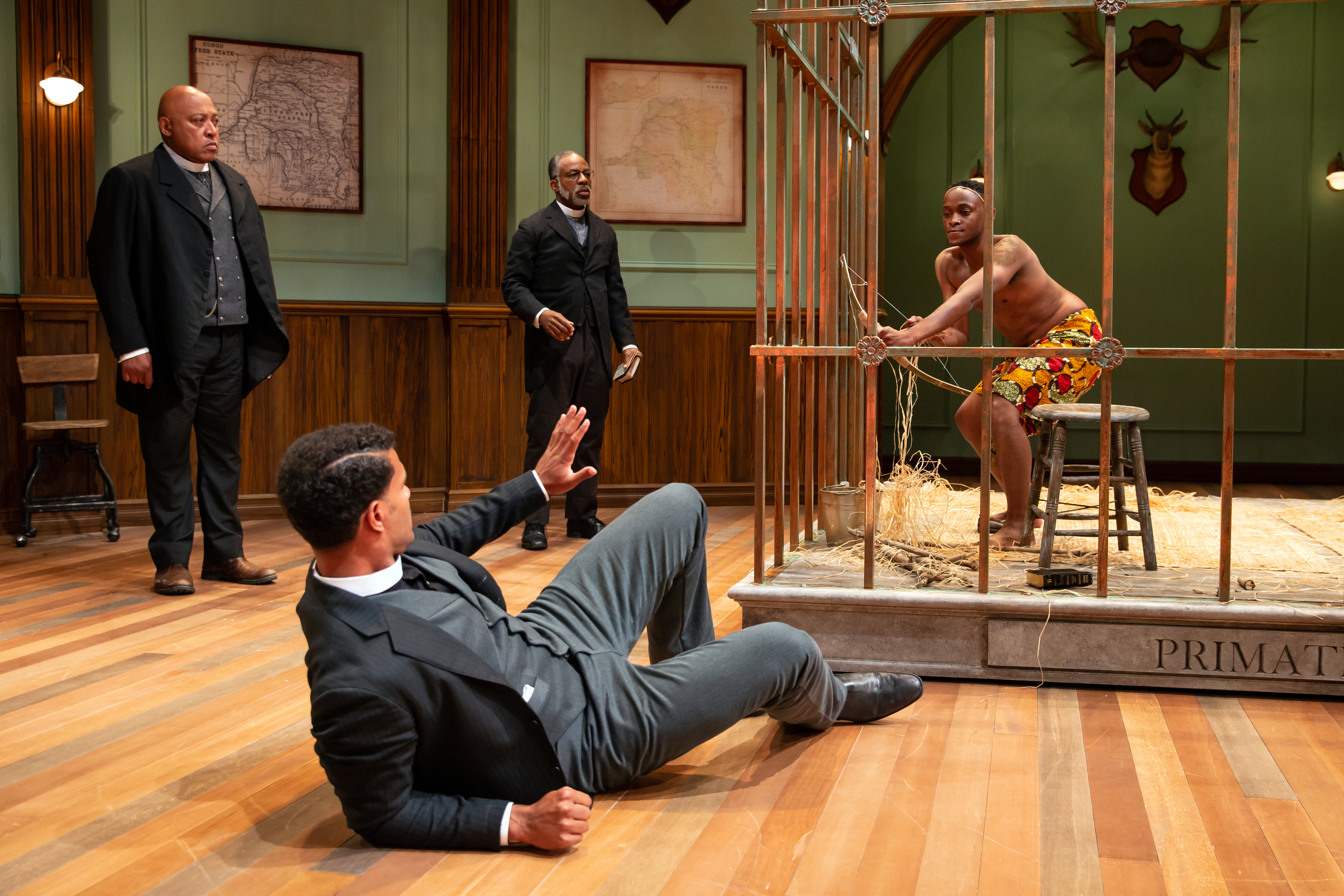 REVIEW: “A Human Being, of a Sort” at the Williamstown Theatre Festival

In 1906 a Congolese Pigmy native, Ota Benga, was brought to New York City, placed in a cage along with monkeys, orangutans and other primates for display in the Bronx Zoo.  This incident is the basis for the new play A Human Being, of a Sort by Jonathan Payne currently at the Williamstown Theatre Festival’s Nikos Stage.

We are introduced to Benga (Antonio Michael Woodard) who is put into a cage by his  keeper Smokey (Andre Braugher,) also black, even before the house lights go down.  He stares at the audience, making faces until he lies down on the straw-covered floor to sleep.  Smokey proceeds to the office of William Hornaday (Frank Wood) the zoo’s director where we learn that he is a convict leased to the zoo to test his rehabilitation.

Though Smokey’s relationship with both Benga and Hornaday is the core of the play, other threads develop.  Three black ministers meet with Hornaday to protest the demeaning of Benga and the Negro race and insist that he be released to Reverend James Gordon’s (Jeorge Bennett Watson) orphanage.  Hornaday contends that the exhibit is an ethnological study.  The conversation is contentious until the youngest minister, Reverend William Slater (Sullivan Jones,) speaks more civilly appealing to Hornaday’s humanity.  He rejects Slater’s pleas.  Reverend George Sims (Keith Randolph Smith) is the most combative until Hornaday silences him with a condescending remark underlining the racial divides in American society.  The patronizing attitude of whites over blacks weaves throughout the play sometimes subtly, sometimes blatantly.  There is a scene in which the ministers implore Smokey to help them but he rails against their motivations and their Christianity.

The two central characters from different parts of the world thirst for their freedom.  Benga from the confines of his cell and the emotional stress he suffers; Smokey deplores the prison to which he was remanded and fears being returned if he fails as Benga’s keeper.  As their friendship deepens Smokey asks Hornaday if Benga could be allowed to walk the grounds.  Permission is granted giving Benga a taste of the freedom he desires.  The crowds follow him resulting in a clash in which an onlooker is injured.  Benga is confined to his cell under more rigid conditions.  He uses a cunning trick to get Smokey’s keys and attempts to run away.   Ultimately, both men lose what they need the most.

Payne’s script is engrossing.  He presents the philosophical arguments forcefully with literate dialogue reflecting the status or social position of the various characters.  There is much more we could have learned about Benga’s early life.  However, the last scene is a flashback to the time Benga meets Samuel Phillips Verner (Matthew Saldivar) who buys him from slave traders and convinces him to travel to America.  It provides information but would have been more effective if it had been interspersed throughout the play Benga’s life in the two different worlds.

The cast is uniformly excellent, led by Braugher’s sympathetic portrayal of Smokey.  As he reveals his background to Hornaday –  the shame he feels for the theft of apples that led to his imprisonment and the fear he has of returning are palpable.  Dealing with Benga he allows himself to become open to a friendship which has not happened in the three years of incarceration.  The warmth and protection of his charge evolve slowly taking us along with him.

Woodard’s Benga is multilayered, at first playing the native for the crowds around him, including the audience, and then revealing a suspicious yet sharp mind.  He receives our empathy  as we hear that his wife and children were murdered and his village razed.  Loneliness and resentment emanate from him.  Woodard, a recent graduate of Brown University with an MFA , had to master Benga’s disjointed speech patterns while giving depth to his character.

Hornaday, as played by Wood, is a master of not committing himself until he is sure he’s in control.  His responses to Smokey and the ministers are delayed as he determines what to say  allowing him to gently phrase the inherent racism that controls his remarks.

The ministers are cleverly created by Payne in that they represent three different approaches to the abhorrent situation that confronts them whether it be with Smokey or Hornaday.  Jones, Smith and Watson lend sincerity and credibility to their roles.

The direction by Whitney White is taut.  There are many conversations in the play that could have slowed down the development of the production, but they are intense, even when of a friendly nature as those between Smokey and Benga.  The stage pictures she’s created are compelling in their simplicity.  From the moment the play opens we are involved in the characters’ lives.

Lawrence E. Moten III has designed a spectacular set that incorporates all of the playing spaces onstage.  The huge cage is initially at center stage but rotates to stage right as Smokey turns it; stage left  holds Hornaday’s office with rich panelling surrounding the entire set decorated with mounted heads of bears, stags, antlers and stuffed birds.  The walls tend to create an arena for the various conflicts.  The lighting designed by Amith Chandashaker complements and gives texture to the set.  The costumes by Tilly Grimes indicate social class from Benga’s bare chest and shorts to Smokey’s keeper uniform to Hornaday’s expensive and stylish suit.

A Human Being, of a Sort is a sterling and provocative work that should not be missed!