REVIEW: “A Raisin in the Sun” at the Williamstown Theatre Festival 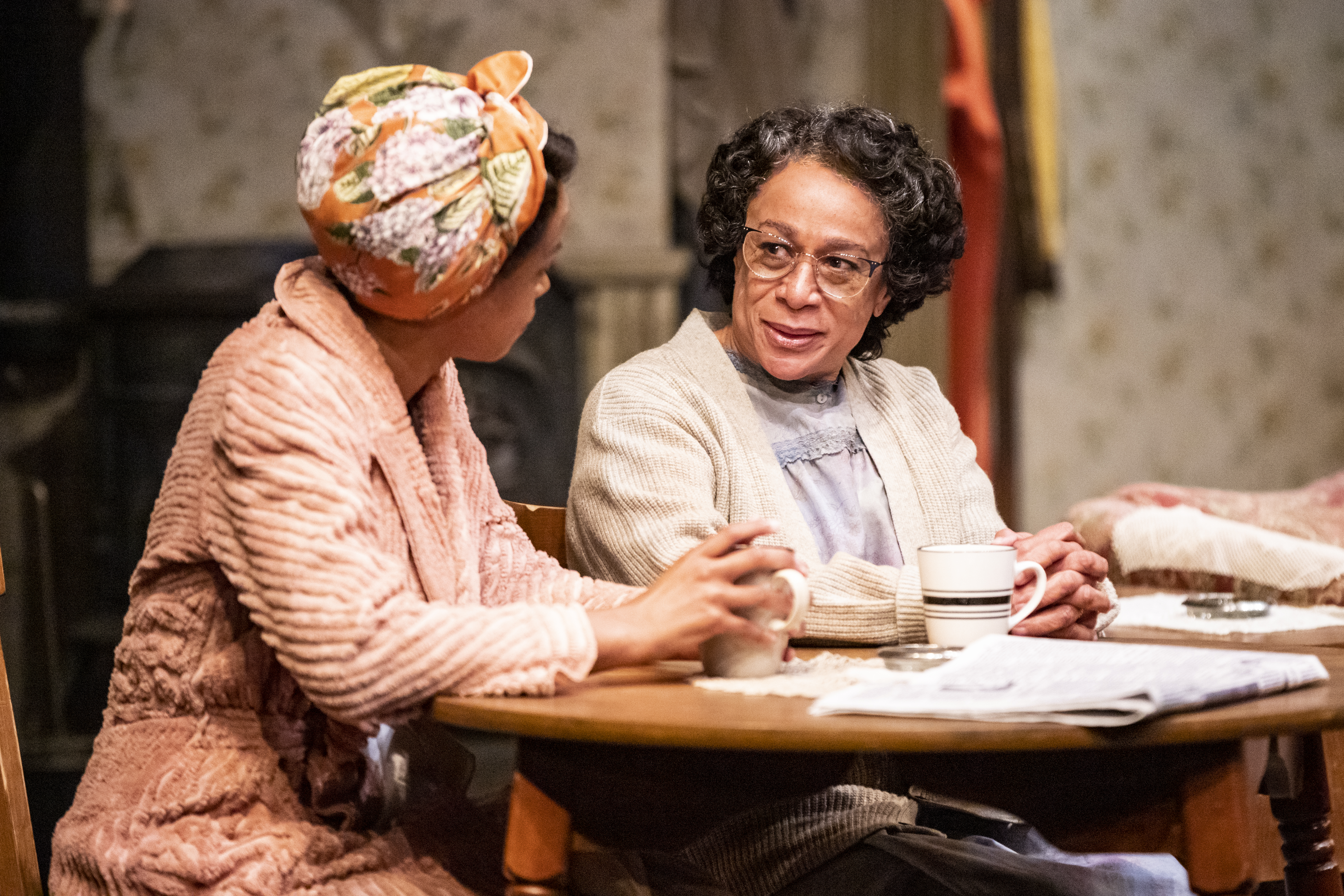 REVIEW: “A Raisin in the Sun” at the Williamstown Theatre Festival

What is the purpose of producing a classic play that has already been revived many times onstage and on film?  Some people say that it’s to give a new generation of theatregoers the opportunity to see an important work.  Others insist that it’s to give a director and his/her team of artists a chance to reinterpret the play.  But when a production feels as though it’s tinkering with a masterpiece in a failed attempt to update it, we fear a lack of trust in the original text.  Such is the case with Robert O’Hara’s staging of Lorraine Hansberry’s A Raisin in the Sun, now running at the Williamstown Theatre Festival.

A Raisin in the Sun debuted at the Ethel Barrymore Theatre sixty years ago—the first play by an African-American woman to be produced on Broadway.  In a recent interview with The Berkshire Eagle, O’Hara reflected:  “I think all classic plays should be treated as new plays.  We’re not in 1959. . . If you want a museum piece, you can go to the museum. . . I’m looking at how we see this family in 2019.”  He added, however, that he thinks the play is brilliant and “If you dislike every choice we make in this play. . . it’s still powerful,” because neither the language nor the story has been changed.  He turns out to be right about that because despite O’Hara’s attempts to leave his personal stamp on this play, the humanity of Hansberry’s work endures.

The playwright’s theme is best expressed in Langston Hughes in his poem Dream Deferred, the first stanza of which provided her with the title of her play:

“What happens to a dream deferred?

Does it dry up

Each member of the Younger family, denizens of a cramped, cockroach-ridden apartment on Chicago’s Southside in the early 1950s, embraces a dream:  the matriarch, Lena Younger (S. Epatha Merkerson), a domestic worker who cleans houses, wants her children to get along and lead contented lives, preferably in a house with a yard that would accommodate them all comfortably.  Her son, the chauffeur Walter Lee (Francois Battiste), dreams of buying a liquor store that will lift him and his family out of poverty; Walter’s wife Ruth (Mandi Masden), a maid, desperately wants to move out of the “rat trap” they live in.  Lena’s daughter, Beneatha (Nikiya Mathis), a college student, is determined to attend medical school.  The arrival of Lena’s late husband’s $10,000 life insurance check serves as the inciting incident; whose dream, if any, will be fulfilled?

Hansberry’s beautifully written, well-made play introduced cultural and racial issues that African-Americans still face today.  Quoted in Steven Carter’s book, Hansberry’s Drama:  Commitment amid Complexity, the playwright said:  “from the moment the first curtain goes up until the Youngers make their decision at the end, the fact of racial oppression. . . is through the play.  It’s inescapable.  The reason these people are in a ghetto in America is because they are Negroes.  They are discriminated against brutally and horribly. . . The three generations of the Younger family depicted in the play differ in dreams, speech patterns, and religious, musical, and stylistic preferences. . . Yet they are unified in their heroic defiance of white hostility and threats. . . the test that [they] face is of their willingness to take potentially fatal risks to get out of an intolerable situation and to force change upon an oppressive system.”  Hansberry even provides Lena with a physical representation of that struggle:  a plant that has to fight for its life to attract a bit of light from the tiniest of windows.

The choices O’Hara mentioned in his interview include the following:  combining three acts into two, eliminating the need for two intermissions, which is helpful in a play of this length; he also ramps up family arguments by directing his actors to talk over each other, resulting in our inability to distinguish what they are saying.  This is a disservice to the playwright’s words.  The director inserts an unnecessary character, Lena’s deceased husband, who goes uncredited in the program because he doesn’t appear in Hansberry’s script.  Underscoring the strong influence his memory has on the family, the ghost haunts several of the scenes in which Lena recalls the difficult life he led as he struggled to provide for his family.  Accompanying his mute appearance is a sound that might best be described as a whistling wind—could this be a visual and aural reference to the ancestors of the family, many of them slaves?  The use of a voice enhancement technique that serves as an echo chamber is also unsettling, as is the shock-inducing final tableau.  Although Hansberry’s text certainly did not ignore the problems that the Youngers would face if they moved into a house in a white neighborhood, O’Hara’s dark ending eliminates any sliver of hope.  Would the playwright approve?

The cast is spotty.  The very talented S. Epatha Merkerson, playing Lena (Mama) the powerful, religious head of the family, is miscast here.  In an interview with The Berkshire Eagle, she explains:  “I don’t have the girth that some of the women who have played this part have, but I don’t think that makes a difference in explaining who this woman is.”  It is not girth in the literal sense that is missing in her performance but the depth of Lena’s passion and hard-earned wisdom, born from a lifetime of suffering, that give her words the poetry and dignity of the mighty woman that Hansberry has created.  In this production, it is Mandi Masden’s Ruth who expresses that passion when she finally says goodbye to the miserable conditions in which the family lives, giving the act break the heft that it needs.  Nikiya Mathis is fine as Beneatha, whose journey to establish her identity leads her from a selfish dabbler to a woman who sees beyond her own needs.

Francois Battiste as Walter Lee, whose aspirations are frustrated at every turn, focuses on the negative aspects of the character—his drunkenness, his constant rage, his resentment, the inability to see the hurt he inflicts on the people who love him, which makes it hard for us to believe in him as Mama does.  Joseph Asagai (Joshua Echebiri) and George Murchison (Kyle Beltran) are Beneatha’s diametrically opposed boyfriends. Echebiri lights up the stage as a proud African whose mission is to help his people, hopefully with Beneatha at his side, while Beltran portrays an assimilationist who seeks to erase every trace of blackness in his and his girlfriend’s heritage. Warner Miller’s characterization of Bobo, Walter Lee’s partner in the liquor store investment, raises questions when he affects a lack of concern about the theft of their money.  Eboni Flowers is entertaining but distracting in her over-the-top caricature of a nosy, nonstop-talking neighbor.  Joe Goldammer, as the white community association representative who warns the family that segregation is the only way for the races to get along, offers a fast-talking interpretation that might have benefitted by a slower attempt to justify his argument.  Finally, young Owen Tabaka rounds out the cast as Travis, the son of Walter Lee and Ruth.

Scenic designer Clint Ramos had to figure out, not altogether successfully, how to construct a crowded, basically one-room apartment, while finding space for the actors to move, as well as fulfilling the difficult demands of the production’s ending.  Costume designer Alice Tavener’s costumes are colorful and beautiful to look at but seem too expensive for this poor family to afford.  Elisheba Ittoop’s sound design expresses the differing tastes of the characters, their backgrounds, and the various types of music popular in the time period, while Alex Jainchill’s lighting design, along with the music, helps to maintain the fluidity of the scenes.

Audience members who are not familiar with the play should not miss the opportunity to see Hansberry’s astute and timeless work, that neither age nor tinkering can diminish.  Imagine how prolific this playwright could have been if she had not lost her battle with cancer at the age of thirty-four, six years after A Raisin in the Sun opened.