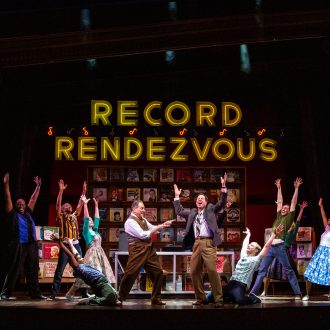 Is it possible to have too much of a good thing?  Berkshire Theatre Group’s production of Rock and Roll Man:  The Alan Freed Story is an enormous undertaking, featuring nineteen cast members, forty-five songs, a revolving stage and multiple projections.  Trotting out dozens of 1950s classics and dynamite singers and dancers to perform them, the show engages the audience from the beginning:  what with clapping, singing, foot-tapping—all but dancing in the aisles.  But the convoluted plot requires patience between numbers dripping with nostalgia for the target audience:  baby boomers.

Adding to the mix in this hybrid musical are several songs written specifically for the show by Gary Kupper.  Some performers from the original Bucks County Playhouse production have re-created their roles for Berkshire Theatre Group.

The book is structured as a farcical trial, dreamed by a dying Alan Freed, who has been charged with “the destruction of the American way of life by inventing the genre of music [he] named rock and roll.”  Freed (Alan Campbell) was a disc jockey who promoted what he called a “River of Music which has absorbed many streams” including “rhythm and blues, jazz, ragtime, cowboy songs, country songs, and folk songs” on his radio programs, concerts and even some films.  J. Edgar Hoover (George Wendt) is imagined as the prosecutor who accuses Freed and his music of “manipulating teenagers into juvenile delinquency, alcohol, narcotics and sex.”  Rock star Little Richard (a terrific Richard Crandle), for the defense, eulogizes him as the man “who opened up people’s minds.  Black and white kids together.  Lovin’ that music.” Introduced by Freed on mainstream white stations like WINS and WABC, this music had previously been broadcast only on smaller, less known black stations.  It was Freed who gave black artists the opportunity to be heard throughout the United States and who arranged live concerts for racially mixed audiences.  But Freed was flawed:  what finally ended his career, besides his excessive drinking, was his involvement with payola (taking money from record companies to play specific records) and accepting songwriting credit for songs he didn’t write but kept playing to increase his profits.

The production keeps returning to the trial as it goes back in time to chronicle (with too much emphasis on the minutiae), Freed’s rise and fall, business associates he meets along the way, his three marriages, the children he rarely has time to see, especially daughter Alana (Whitney Bashor, singing some beautiful and touching melodies with and about her father), all interspersed with star numbers by big name performers like Buddy Holly, Bill Haley, Fats Domino, Chuck Berry, Screamin’Jay Hawkins, and Jerry Lee Lewis.  An excellent and versatile quartet (Early Clover, A. J. Davis, Jerome Jackson and Dr. Eric B. Turner) backs up these iconic acts in addition to representing groups like the Moonglows, the Drifters and the Platters.  Enough to make one dizzy!

The work of the design team is nothing short of fabulous.  Scenic designer Tim Mackabee has provided a revolving stage, which morphs from the trial with its benches, Greek pillars and nightmarishly-colored walls to various other locations with speed and precision.  For individual performers there is an upper level, a platform that slides forward between half-opened curtains, lights and a microphone in front of the richly-draped curtains, and a large space behind them for dance numbers.  Lighting designer Matthew Richards’ work is dazzling, furnishing gorgeous upstage colors that frame the performers and creating disco ball effects throughout the stage and theatre.  Costume designer Leon Dobkowski creates miracles as he dresses a huge cast, most of whom play multiple roles, aided by Wig, Hair and Makeup designer J. Jared Janas.  Sound designer Nathan Leigh and conductor/keyboardist/music director Dave Keyes (and his orchestra) almost force the audience to leap out of their seats and dance.  Projection and Video designers Christopher Ash and Kevan Loney immediately identify every one of the many venues in Freed’s journey, often behind a gauzy white scrim.  Kudos to director Randal Myler and choreographer Brian Reeder for guiding this vast and complex production smoothly and energetically.

The entire cast is to be commended for its yeoman work in Rock and Roll Man.  Alan Campbell as Freed is a wonderful singer/actor whose sparkle permeates the production.  George Wendt recently spoke about his role as J. Edgar Hoover on NPR radio, explaining that since the trial is Freed’s dream, the actor was not required to imitate Hoover, giving him a free hand to play a villain (a real change from his eleven year stint as Norm on Cheers).  Richard Crandle’s Little Richard—whose gold-lame outfit tells us everything about his persona—adds humor and pizzazz as lawyer, singer, and dairy queen spokesperson (our “Dairy Queen honey”).   Bob Ari, playing the dual roles of Leo Mintz, owner of Record Rendezvous, where Freed first hears the music he comes to champion and Morris (Moishe) Levy, mobster as well as promoter of Freed’s career,  differentiates his characters to such an extent that he is nearly unrecognizable in the two roles.  The talented chorus of singers and dancers as well as many of the performers whose characters we remember are also equally adept at taking on multiple personas in the ensemble.

Credit Kate Maguire, Artistic Director of BTG, for taking on such a momentous challenge.  As Rock and Roll Man continues to undergo revisions, one hopes that the script will be pared down so that it doesn’t try to tell all of its stories at once, nor include every song, original or classic.  But for now, enjoy the dancing, singing, and evocation of times past, in this electric production.

Rock and Roll Man:  The Alan Freed Story runs from June 27—July 21 at The Colonial Theatre, 111 South Street, Pittsfield, where tickets may be purchased, or go online to www.BerkshireTheatreGroup.org or call 413-997-4444.