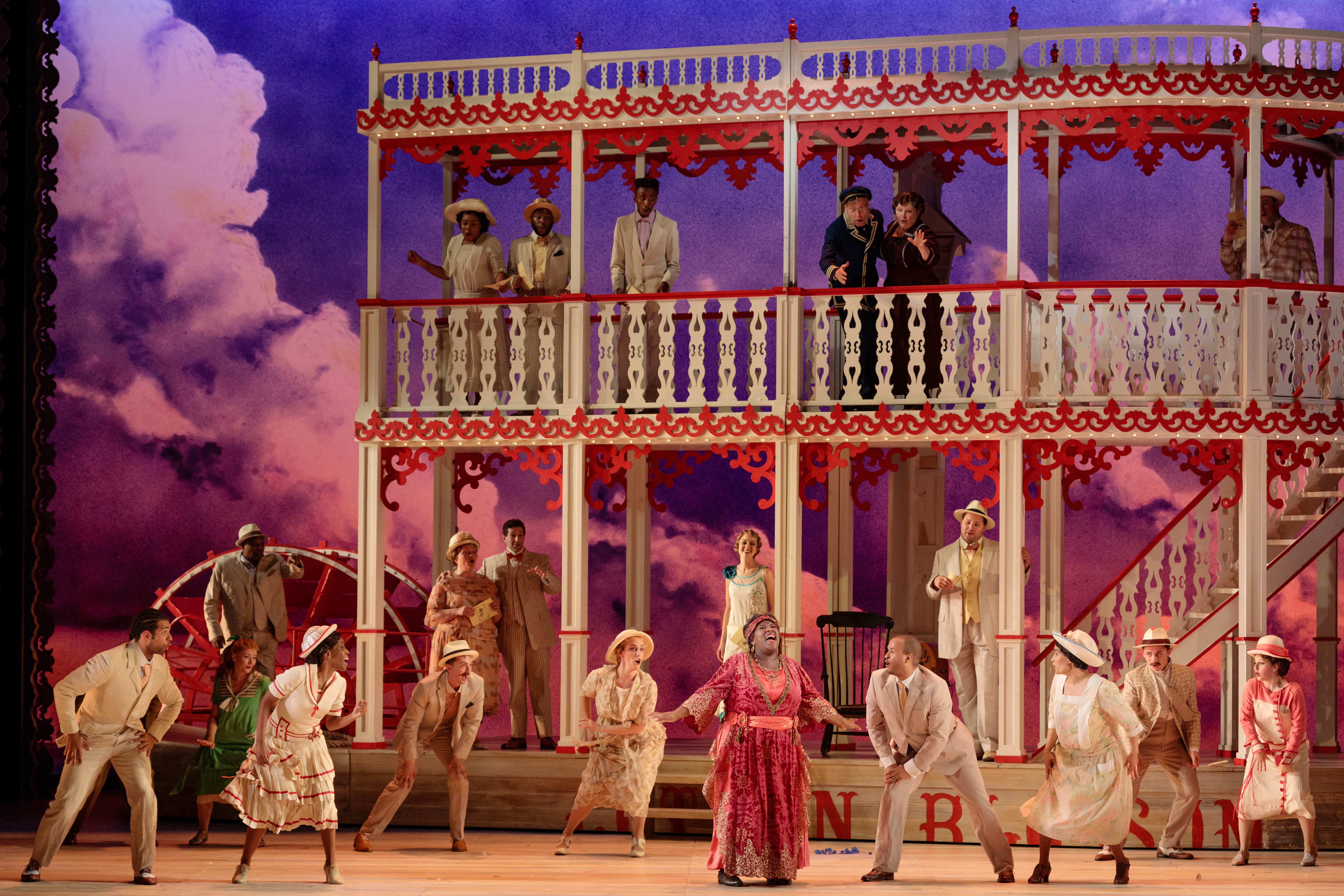 Show Boat, first produced by Florenz Ziegfeld in 1927, marked a turning point in theater history.. Appearing during a time when frothy entertainment like light-hearted operettas and revues packed the theater scene, this was likely the first musical driven by a serious plot, the first musical where book and music merged. An enormous success, it forever changed the course of American musical theater.

The Glimmerglass Festival in Cooperstown, NY, has created a production of Show Boat that not only honors the historical importance of the show, it has spectacularly succeeded in putting together an electrifying, soul-searing work of art that is remarkably satisfying on so many levels.

Edna Ferber, the author of the novel upon which the play is based, was born in 1885 to an immigrant father and an American-born mother. Her father suffered from poor health, and the impoverished family moved frequently throughout the Midwest. Frequently the brunt of anti-Semitic attacks (she recalled adult men spitting on her when, as a young child, she delivered her father’s lunch to his place of work), Ferber would grow up to become an internationally recognized journalist, novelist, and playwright, and her difficult childhood would inform her work, in which she examined the effects of bigotry and the lives of outsiders. When Jerome Kern approached her about basing her 1926 novel, Show Boat, into a musical, she balked. Kern convinced her that he and Oscar Hammerstein II were devoted to maintaining the novel’s weighty subject matter.

In the 1920s, audiences were familiar with show boats, which were essentially floating theaters housing actors as they traveled along various U.S. rivers, bringing melodramas and comic revues to otherwise isolated pioneer towns from the late 1800s through the 1930s. (One can easily imagine why Ferber was drawn to show boats, where the occupants were always outsiders, always traveling.)

The Cotton Blossom, the show boat of the title, travels along the Mississippi River. The play begins in 1887, when the Cotton Blossom docks in Natchez. Cap’n Andy Hawkes (Lara Teeter), who lives on the boat with his wife, Parthy (Klea Blackhurst) and daughter, Magnolia (Lauren Snouffer), introduces the interested townsfolk to his cast, including beautiful leading lady Julie La Verne (Alyson Cambridge), and Julie’s husband and leading man Steve Baker (Charles H. Eaton). A fight breaks out between Steve and Pete (Maxwell Levy), a crude engineer who has been making passes at Julie. Cap’n Andy fires Pete, who warns he knows a secret about Julie and will use it to get his revenge.

Magnolia, affectionately called “Nolie,” adores Julie and aspires to become an actress herself. When a dashing gambler, Gaylord Ravenal (Michael Adams), strolls near the Cotton Blossom, 18-year-old Nolie strikes up a conversation with him; each becomes smitten. Julie warns her that Ravenal could be just a “no-account river fellow”; she is also warned by dock worker Joe (Justin Hopkins) and his wife, the ship’s cook, Queenie (Judith Skinner). Nolie declares that she’d love Ravenal no matter what, prompting Julie to sing a few lines of a favorite song, “Can’t Help Lovin’ Dat Man,” and Queenie, who, like her husband, is black, expresses surprise that Julie knows the song, since she has only heard “colored folks” sing it.

In the next port we learn about Pete’s revenge. He has snatched Julie’s photo from a sandwich board and brought it to the local sheriff, who raids the boat announcing that Julie and Steve had broken miscegenation laws–laws in the South that prohibited white people and black people from marrying or having a sexual relationship. Julie has “Negro blood.”  But Steve, who with Julie had prepared for such a crisis by cutting Julie’s finger and swallowing a bit of her blood before the sheriff’s raid, foils the sheriff by reminding him that Mississippi defined a Negro as any person who has a drop of Negro blood in him. Since Cap’n Andy and his family had witnessed Julie’s finger-cutting, they are able to swear that Steve has at least a drop of Negro blood.

The action unfolds during a 40-year period, punctuated by the reminder that no matter what turns individual lives take, time will go on: “Ol’ Man River” just keeps rolling along. As Joe, Justin Hopkins’s rendition of the song is painfully beautiful, rich, and resonant. Indeed, every member of this Show Boat cast seems a world-class opera singer, and I found it utterly thrilling to hear a score that I love embraced so elegantly. The acoustics, as befits the opera house, are wonderful, pure, and clear. (As also befits a contemporary opera house, there are supertitles designed by Kelley Rourke projected above the stage, and I was pleasantly surprised to see them used for Show Boat.) Eric Sean Fogel’s choreography was charming and fun, and what a pleasure it was to watch such gifted dancers in action.

Paul Tazewell’s costumes are downright gorgeous and period-perfect, and they play brilliantly on  Peter J. Davison’s clever, evocative set. Mark McCullough’s lighting is spectacular, crowning the visual feast that is this production of Show Boat.

But really, Show Boat is a feast for all the senses, one of those all-too-rare shows where every element of production and performance combine to create some kind of alchemy that is transformative.

If you go (and I hope you do!), know that the Glimmerglass Festival has a lush campus, and you can bring a picnic (or order one in advance), or buy a wrap or a salad, as well as a glass of wine (or beverage of your choice), and enjoy it at leisure at one of their many outdoor tables. It’s worth getting there early.