REVIEW: “The Skin of Our Teeth” at the Berkshire Theatre Group 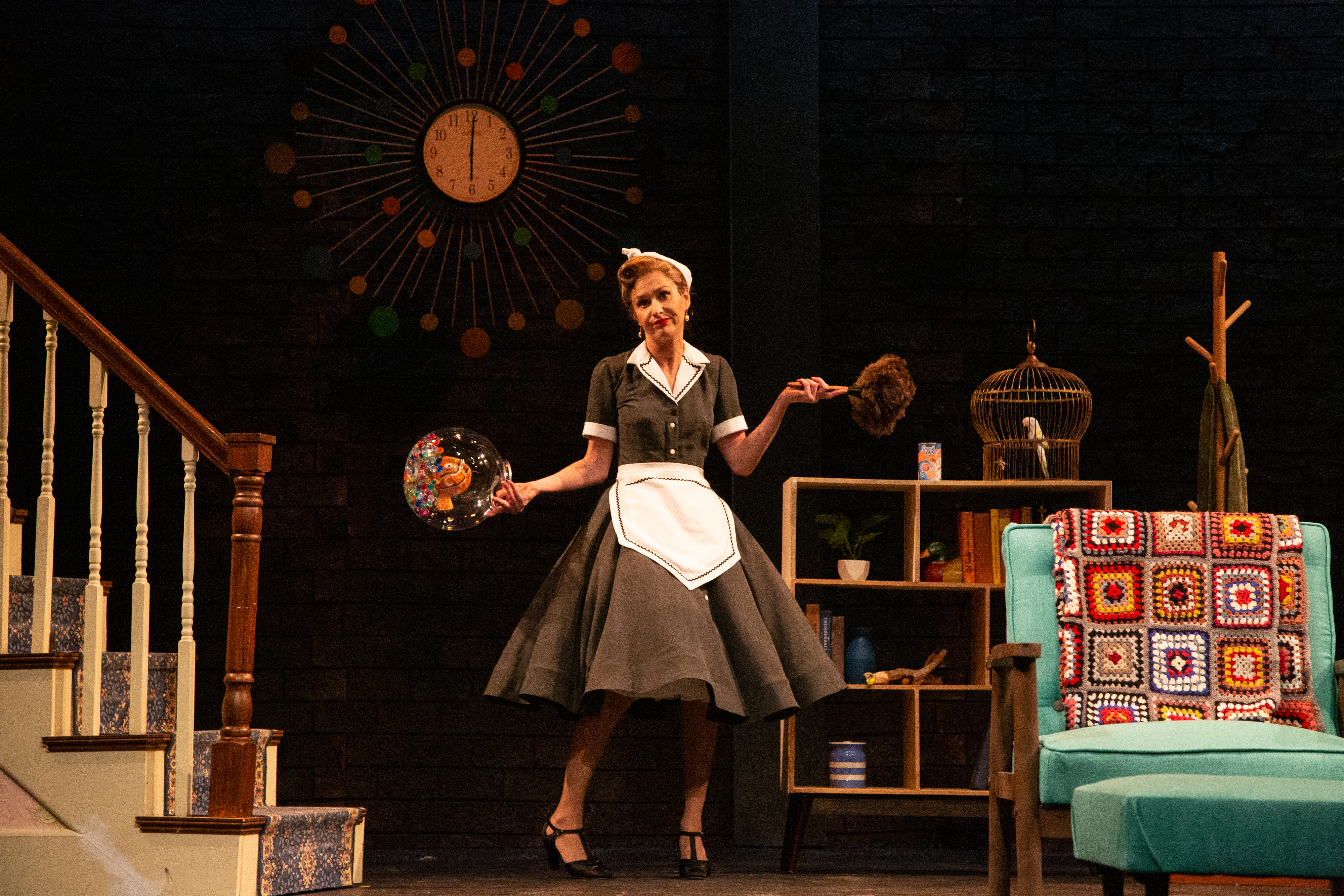 REVIEW: “The Skin of Our Teeth” at the Berkshire Theatre Group

Through history humanity has escaped extinction numerous times but total destruction is still a distinct possibility.  There was, of course, the flood that Noah and his ark overcame after forty-something days.  The Black Plague.  The atomic bombs that closed World War Two, and today who knows what will happen with a narcissistic finger on the red button that would send devastation throughout the world.   This eternal possibility is key to Thornton Wilder’s The Skin of Our Teeth receiving a problematic production at Berkshire Theatre Group‘s Fitzpatrick Main Stage in Stockbridge, MA.

Wilder won three Pulitzer Prizes for the novel The Bridge of San Luis Rey and the plays Our Town and The Skin of Our Teeth.  His works explore the connection between mankind’s everyday experiences and its place in the universe.  His characters. whether from Peru, Grovers Corners, New Hampshire, or Excelsior, New Jersey, are ordinary people living simple lives.

In The Skin of Our Teeth we meet George (Danny Johnson,) who has just invented the wheel, and Maggie (Harriet Harris) Antrobus (from the Greek word for “human”,) their children Henry (whose name used to be Cain – Marcus Gladney, Jr.,) Gladys (Claire Saunders,) and Sabina (a la the rape of the Sabine women) the maid.  There are myriad Biblical, historical and mythological references throughout the play.  Though set in 1942, the year it was written, there are many anachronisms. The first act has Excelsior’s citizens waiting for an oncoming ice age as mountains of ice are covering the land. The Antrobus’s pet dinosaur and mammoth come into the house to stay warm; weary and frightened travelers, including Homer, Moses, three Muses and others are invited into the house. In the second act, a monster rainstorm is about to occur. There are contemporary references to Berkshire Medical Center and Outside Mullingar which is running at the Unicorn Theatre.  A present-day thematic note is that the Antrobuses are racially mixed.

A conceit that occurs several times has actors breaking out of character mid-scene and addressing the audience.  In the first act Sabina, (Ariana Venturi) playing the actress Miss Somerset, tells us she doesn’t understand the play, hates it and maybe we should leave.  Act two is on the Atlantic City boardwalk where the populace awaits the impending storm.  A fortune teller addresses the audience.  In the third act Mr. Antrobus informs the audience that a few of the actors haven’t arrived and some of the designers, a janitor and the head usher will take over those parts, but first the stage manager will run a rehearsal.  The company hopes the audience will forgive them and be patient.

The subject matter, the end of civilization, is very dark but the first two acts could be played lighter; the darkness of the production is the director’s (David Auburn) choice.  In these acts there are whimsical moments that effectively contrast with the dire circumstances.  Act three, other than the break for “rehearsal,” is heavier; it takes place after a seven-year war when Maggie and Gladys, who has a baby, have been living in a bunker under the house while Henry and George are fighting in the war.  Sabina, who has been a camp-follower, re-joins them.  Father and son argue as to whether the human race can ever stop annihilating itself and do they deserve to survive?

Johnson and Harris have control of their respective roles as the Antrobuses.  They skillfully mine the humor and sentimental moments while giving depth to the more powerful scenes as does Gladney Jr.’s Henry, especially in the last act when he challenges his father’s optimistic desire to rebuild civilization.  Saunders’ transition from a somewhat ditzy teen-ager to a world-weary mother is touching.  Sabina is the most animated character and Venturi throws out her laugh lines with aplomb.  There are times, however, when her projection could be stronger.

Auburn’s direction keeps the play moving as he touches Wilder’s thematic intentions.  As mentioned above, however, the tones of the three acts could be more effectively accomplished to enhance these issues.  Act two’s Atlantic City boardwalk uses many actors in addition to the principals.  Some of the staging, along with the set and props, appears haphazard when it should be controlled chaos. Otherwise, Bill Clarke’s sets for the first and third acts  – the Antrobus home before and after the war – accommodate the staging and the surrounding environment.  Daniel J. Kotlowitz’s lighting, like the sets, is too dark except when it functions dramatically for the third act.  The costumes by Hunter Kaczorowski identify the characters’ stations as well as reflecting their personalities.

The Skin of Our Teeth is not an easy play to produce.  BTG should be congratulated for daring to mount this seventy-seven-year-old play that speaks to our troubled times.