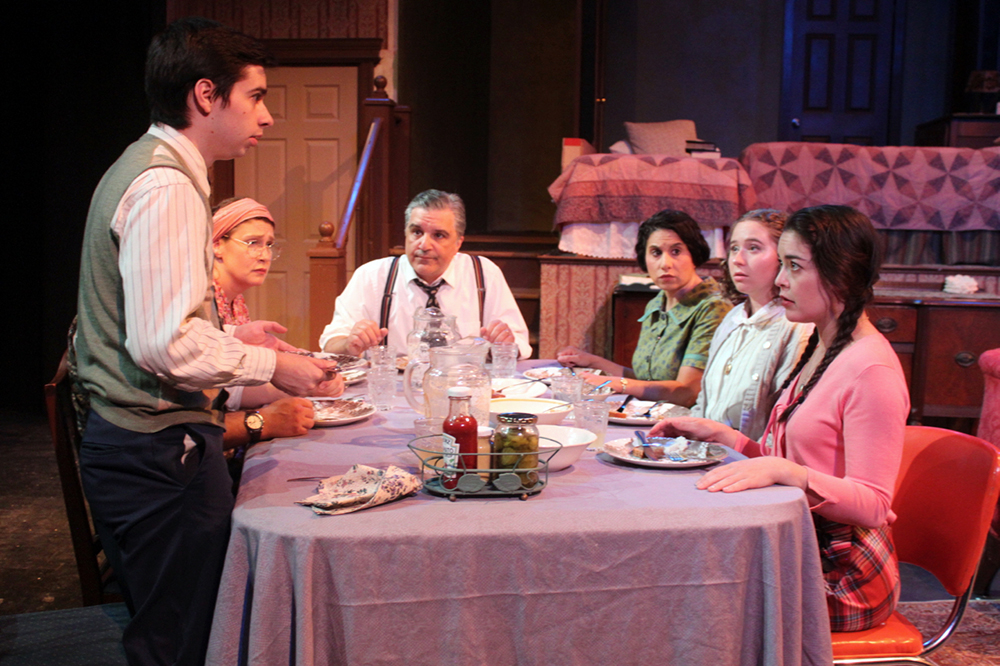 The minute that Sarah Corey makes her entrance as Neil Simon’s indomitable matriarch, Kate Jerome, Oldcastle Theatre Company‘s production of Brighton Beach Memoirs you know who’s in charge here. This is Corey’s second Oldcastle turn as Kate, having played an older iteration in Broadway Bound in 2017, and for those of us lucky enough to have seen both productions, it is like coming home. Even if your mother wasn’t Kate, Kate is your mother for the two and a half hours you will spend with her.

Brighton Beach Memoirs is the first in Simon’s trilogy of plays about the Jerome Family. It is September of 1937, and Eugene (D. J. Gleason), our narrator, is 15, while his brother Stanley (Anthony Ingargiola) is 18, just out of high school and into the work force. Their father Jack (Eli Ganias) is a garment cutter for a manufacturer of ladies’ raincoats, who also takes on other odd jobs to support his family in the Great Depression. Their mother Kate is a homemaker, and for the past three years their home has also included Kate’s widowed sister, Blanche Morton (Sophia Garder), and Blanche’s two daughters, Nora (Kate Kenney), 16, and Laurie (Kristen Herink), 13.

The family owns a three bedroom house in the Brighton Beach section of Brooklyn. They are Polish and Jewish and they worry daily about family back home as Hitler advances through Europe. Everyone scrimps and save and true poverty is always kept just at bay, but at heart the Jeromes are proud that they can manage on what they do have.

All of that managing falls on solidly on Kate’s shoulders. In addition to corralling four teenagers, she is the emotional prop for her depressed sister and the physical shield for her over-stressed and ailing husband.

Corey’s performance is absolutely solid and immediately appealing. She gets this woman, her considerable strengths and her failings. Simon has crafted the character with tremendous love, and Corey channels it beautifully.

Gleason’s Eugene is bursting with the sexual and physical energy with which a boy of that age is possessed, and his antics provide most of the comic relief in what is otherwise quite a sober family drama. I often have a hard time with adults playing children, and I felt that a bit with Herink’s Laurie, but Gleason had me completely convinced that he was still in high school and torn between his love for baseball and ice cream, and his new found frenzy for the female form.

Ingargiola brings a warmth and genuineness to the role. His Stanley is a terrific Big Brother and a loving son, even though he is also just barely an adult and subject to the failings of his age. Ganias’ Jack connects well with the rest of his family – even his sister-in-law – providing a strong father figure even as he struggles to stay healthy enough to fulfill his bread-winning role.

Garder’s face is just a mask of tragedy as the bereaved Blanche, a woman who invested her whole self into her marriage only to be left rudderless at its sudden demise. But like her sister Kate, she is devoted to her children, even though she lacks the strength of her convictions to guide them towards adulthood. I felt Kenney was miscast as Nora. She didn’t look like she could be Garder’s daughter or Herink’s sister, and she looked to mature to pass as 16.

At a time when we are hearing a lot of rhetoric about who is “an American” with various unflattering stereotypes being pinned to different ethnic groups, it is hard to hear Kate’s disgust and anger at the Irish family who lives across the street and their son who hopes to date her sister. Earlier in the 20th century discrimination was strong against both the Irish and the Italian, and to a lesser extent the German, immigrants to New York City. It is interesting that Kate, who understands so clearly what discrimination has done to her ancestors, cannot understand that she is perpetuating an identical violence against another ethnic group.

Richard Howe’s manages to pack an awful lot of distinct rooms into the Oldcastle performance space, creating the cheek-by-jowl intimacy that the two families sharing one home must feel. Stith and his actors are careful to use each doorway at the appropriate time for the appropriate purpose, so you soon catch on to the condensed floorplan of the house. Ursula McCarty’s costumes are good, but they veer heavily towards purple, particularly in the second act, which is puzzling.

Like Tennessee Williams’ A Glass Menagerie, Brighton Beach Memoirs is a memory play, a family seen through the eyes of the son. While it is generally accepted as a semi-autobiographical work, there aren’t actually many direct parallels to Neil Simon’s own family. He said himself that the Jeromes were “the family I wished I’d had instead of the family I did have.” So we can’t look at them as direct representation of the Simons, but it is clear that Simon loved the Jeromes like family. Oldcastle loves them too, and it is wonderful that they have brought them back to Bennington in this strong and proud production,