REVIEW: “On the Exhale” at Chester Theatre Company 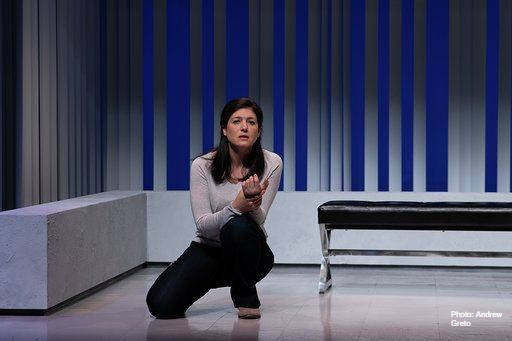 REVIEW: “On the Exhale” at Chester Theatre Company

A college professor relates the story of one of her students demanding that she raise his grade.  When she refuses he takes out a gun  and shoots her.  This is a dream after which she takes several non-violent and inconsequential steps to prevent such an event.

Next she tells us that her seven-year-old son was slain in a school shooting.  This is not a dream.

Martin Zimmerman’s play On the Exhale currently at the Chester Theatre Company in Chester, Massachusetts, traces the slow evolution of the professor’s emotions as she confronts the pain and the need for vengeance that have overtaken her life.  She traces the path of the rifle to the seller and then testifies to government officials who ignore her pleas to stem the tide of violence engulfing the country.

Skillfully performed by Tara Franklin, one of the area’s most accomplished actresses, the Woman, as she is identified in the program, tells us of how she received the news of the shooting, then waiting behind police barriers at the school followed by the horrendous announcement that her son Michael was one of the victims.  Franklin’s objective narration doesn’t obscure the intense determination to avenge Michael.  Wherever she goes she sees him and is inspired to pursue those responsible for her agony.  It would be easy for the telling of the story to become maudlin or filled with hysteria, but Franklin’s Woman is always under control.  She holds the stage, not by being the only character in the play, but by the power and sensitivity of her performance.  Her work is a model of acting technique and emotional discipline.

Director Colette Roberts has paced the production in gradual, well-conceived increments,  avoiding the temptation to indulge in over-acting, giving the Woman’s actions credibility while building the play’s tension moment by moment.

Travis George’s dramatic set surrounds the playing area with a wall of white fabric slats and a simple black vinyl utilitarian bench.  The slats absorb and reflect the light design by Lara Dubin that suddenly enhance the myriad moods and emotional moments.  Rumbling sounds designed by James McNamara unobtrusively segue into and out of the production giving resonance to its changing tones.  Charles Schoonmaker has dressed Franklin in a very simple yet elegant blouse and pants, further emphasizing the straightforward quality of the play.

Zimmerman’s script is tight… no wasted words or moments.  The play is a condemnation of rampant carnage and the ineffectual attempts to control it.  He also delves into the mind and heart of Woman who has decided to wreak revenge on those responsible for not controlling the mayhem and mitigating the agony of those who must exist with the horror.

Everything is of a piece in this taut, profound production.  If you wish to experience an intelligent and provocative play, Chester is the place to be.