REVIEW: “The Children” at Shakespeare & Company 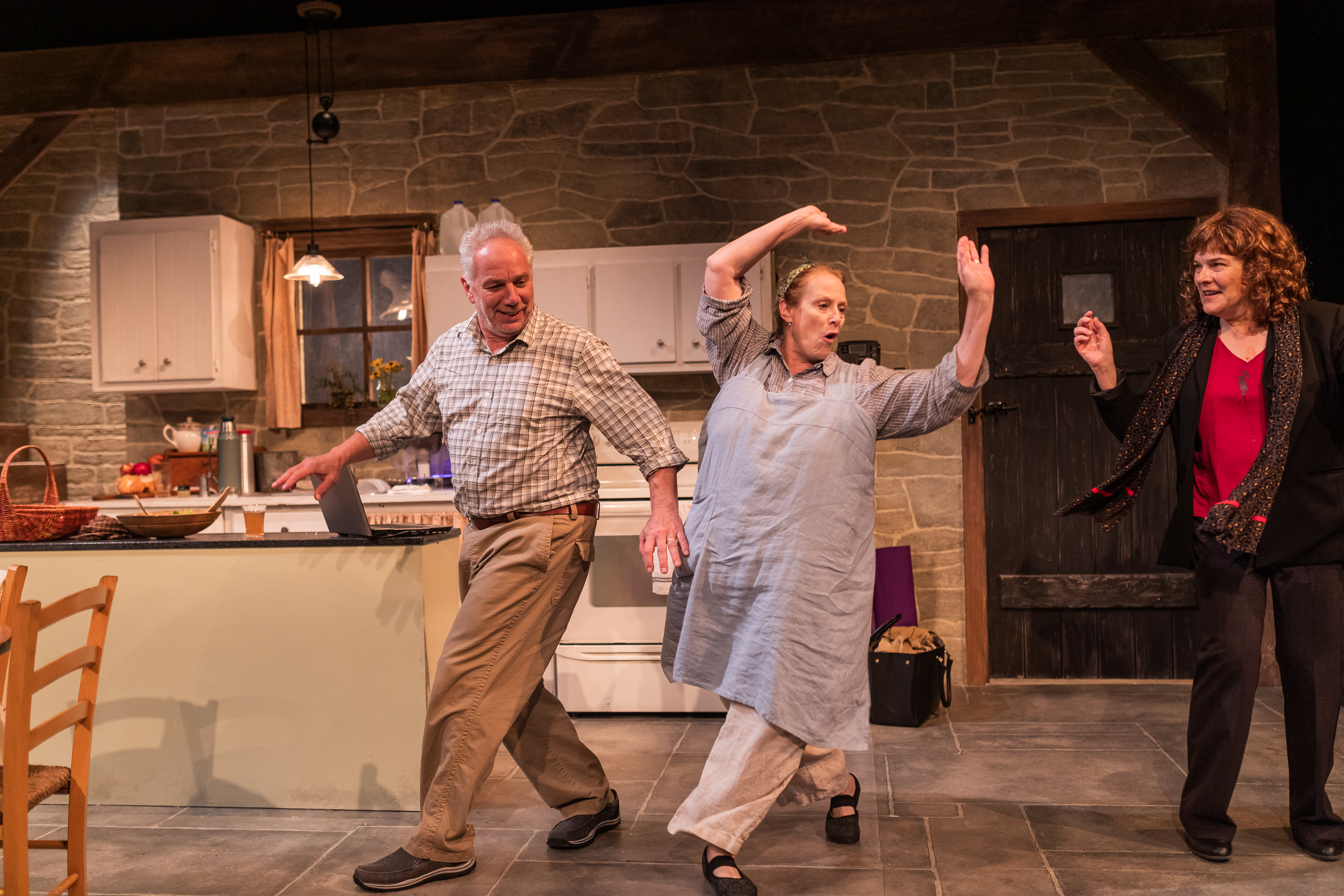 REVIEW: “The Children” at Shakespeare & Company

First came the earthquake, then the tsunami that devastated villages, inundated farms, caused massive beach erosion and flooded a nuclear power plant along the English coast.  All this occurs before the beginning of Lucy Kirkwood’s The Children, a provocative play currently enjoying an intelligent and engrossing production at Shakespeare & Company’s Elayne P. Bernstein Theatre.

Hazel and Robin, former scientists at the power plant now in their mid-60’s, live in a small stone cottage close to the seaside and down the road from the nuclear complex.  Rose, a former colleague, suddenly arrives for a visit after a thirty-eight year lapse. She stands in the middle of the floor suffering a nosebleed which Hazel tends to. These are the beginning moments of a series of conversations and revelations that plumb the relationship of the three old friends.

Hazel (Diane Prusha,) though courteous, appears to be somewhat wary of Rose’s (Ariel Bock) presence and proceeds to make small talk while Rose is not forthcoming about the reason for her unannounced visit.  They trade superficial information about their lives over the years until Robin (Jonathan Epstein) returns from the farm at the old homestead where he goes every day. Gradually the secrets and angers of the past are revealed.

The first hour-plus of the play is a domestic comedy/drama until the reference to their time at the plant and what has been wrought by nature and mankind.  When Rose informs them of the reason for her visit intense arguments follow regarding climate change and the potential dangers of nuclear power plants as occurred at Fukushima in 2011.  These scenes bring the levity to a halt and emphasize the profundity of the ecological changes the planet is experiencing which segues to the question of man’s responsibility to man.

The play makes a seamless transition from one tone to another; credit Kirkwood for creating a convincing debate within the structure of a seemingly mundane play.  She does, however, use a stage device when each character leaves the kitchen so that the remaining two can have a personal conversation. She has also included a scene in which the three giddily dance together suggesting the camaraderie they once shared.

What carries the play are the performances by three of the major actors in the Berkshires.  Prusha works the emotional levels of Hazel intelligently. Her attitudes may change moment to moment but they arise from a logical reaction to what is happening to and around her.   Her voice is honeyed with tinges of suspicion or frustration. The scenes with Epstein sound like a married couple though there is a sense that not everything is what it should be. He too moves smoothly from one stance to another as he wends his way through the connection he has with the women.  Bock’s Rose is enigmatic, skillfully avoiding committing herself to describing her mission; then she is resolute in defending her actions.

Director James Warwick has paced the production carefully so that the audience is aware that something is amiss amongst the three, keeping their secrets until another puzzle piece drops into place.  He maintains interest by making the characters likable though they are apprehensive about what is occurring. The laughs permeate the conversations while he readily builds into the final conflicts. Set designer Patrick Brennan has created a homey cottage that ultimately contrasts with the tensions and recriminations that evolve.  James W. Bilnoski’s lighting complements the varying moods of the play.

This is a solid production of a difficult play that finds its truth in the hands of the hard-working actors and director.