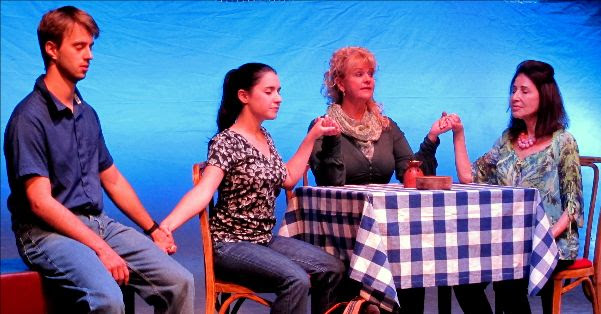 The set-up is inspired (literally): In 2010, a respected Alabama biology professor shot and killed three of her colleagues in cold blood. Defeated after a long and humiliating tenure review, the wife and mother of four opened fire in a faculty meeting with a gun her family didn’t even know she carried. Michelle Carter’s new play Better asks not what made her do it, but how the child of such a homicidal parent copes with the knowledge her genes may be “tainted.”

It’s a marvelous premise for a harrowing drama. What makes Better better than expected is its surprise detour into light, if queasy, post-teen-angst comedy. For a hot-button topic, that’s a dangerous balancing act. Although the world premiere at the Bridge Street Theatre is a bold presentation, occasionally it plays more like a workshop production. Nevertheless, playwright Carter is onto something here that feels authentic.

Her protagonist is Emily (Montana Lampert Hoover), a gifted science major at her mom’s university. Half egghead and half malcontent, Emily loses both her scholarship and her academic status in the shooting aftermath. Along with her chemist father (Brian Linden), she becomes a pariah in Huntsville. But instead of dropping off the grid, Emily gets a job at a tacky fondue restaurant so she can raise tuition money while facing down the townspeople. Against the wishes of her absent-minded geek boyfriend (a perfectly-cast Eric Fleising), she visits a wisecracking medium (Lori Evans) in search of Big Answers.

Better’s small cast boasts a sharp lineup. Evans has a ball slathering on Medium Molly’s southern-fried charm. Linden gets to act alone with a cell phone in several scenes (every actor’s dream). And Carla Lewis projects maternal concern and a caustic wit as Emily’s boss, Luisa – a woman who insists her own children are “assholes.” But it’s Fleising as Emily’s shy, spacey lab partner-paramour who steals the show with deft underplaying. It’s one of those funny, shaggy-dog performances in which it’s hard to tell where the actor ends and the role begins.

As Emily, Montana Lampert Hoover impresses from the get-go. This production is her play and she makes the most of it. Dark hair pulled back into a no-nonsense ponytail, Hoover charges head-on into Emily’s agitated dilemma: estranged from her mother, betrayed by her love of science and fed up with the entire world. We keep hoping a vulnerability will surface but, for better and worse, Hoover doesn’t go there. Better, because she’s true to the character as written. Worse, because the character as written is a pain in the ass. For most of the play we feel this poor girl’s anguish. But as it becomes clear she’s her mother’s daughter, we start feeling our own. Our hearts don’t break for Emiliy, and that’s fine with her.

The home stretch is where Better falters. As Emily becomes more brittle, she exhibits behavioral evidence of hereditary predisposition. It’s mentioned that her mother simply can’t tolerate injustice; Emily can’t tolerate B.S. (which, in this context, does not refer to her college degree). Such provocative themes get short shrift in the play’s present state. The subtext is genetic biology, but the text is more concerned with sociology and chemistry – namely her father’s unsettling experiments with PVC pipes. Science metaphors are murkier here than in The Effect of Gamma Rays on Man-in-the-Moon Marigolds, a play that bears much in common otherwise.

Certainly the lighting/scenic design by John Sowle is on sure footing, what with its molecular motifs and a whimsical LED double helix hovering like a cerulean rain cloud. The costumes by Michelle Rogers take a more utilitarian approach. Denim jeans, sweaters, work uniforms and a backpack complement the scant stage furnishings. Disappointingly, the original synthesizer music by the multi-talented Rodney Alan Greenblat errs on the side of sci-fi cliché. Granted there are a lot of scene transitions, but less bleeping would be more.

Director Sara Lampert Hoover (the star’s real-life mom) does well by the script, especially in how she conducts so many seamless shifts in tone. Her staging may underwhelm at times, but for most of the show, she keeps Carter’s smart, witty dialogue bristling with credibility. What this fledgling comedy-drama needs, besides a satisfying conclusion worthy of its opening premise, is an urgency to get to the bottom of genetics … the sooner the better.

Postscript: All puns aside, Better could use a better title. It’s too easy to title a review “I’ve Seen Better.”