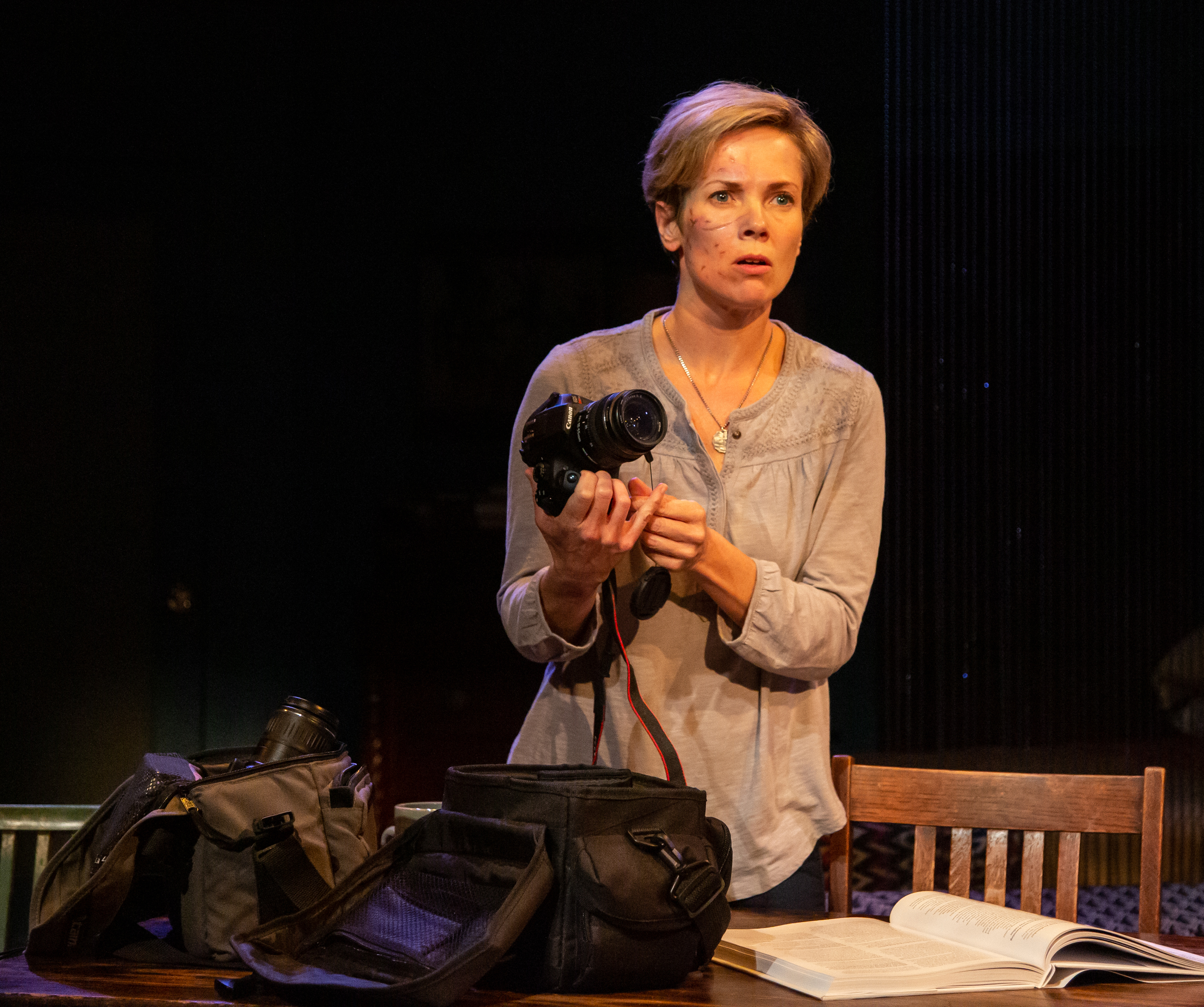 “I live off the suffering of strangers.  I build a career on the sorrows of people I don’t know and will never see again. . . I’m such a fraud.”

These concerns are expressed by international photojournalist Sarah Goodman in a revealing moment as she recuperates from critical injuries inflicted by a roadside bomb in Donald Margulies’play, Time Stands Still, currently running at Shakespeare & Company.

Produced in New York City by the Manhattan Theatre Club and then at the Cort Theatre in 2010, Time Stands Still explores the mental and physical damage suffered by journalists in war zones, which has only gotten worse since the play was written—witness the murder and dismemberment of Jamal Khashoggi last year.  In her program notes, veteran director Nicole Ricciardi chronicles the 2019 deaths of journalists on assignment—a long and troubling list.  In a trailer for the production, Ricciardi asks the central question posed by the play:  “Is it important for you [journalists] to put your life on the line to make sure that I know what’s happening on the other side of the world?”  Foreign correspondents like the fictional Sarah must convince themselves, despite the horrors they live through (or die for), that the truths they uncover through their words and photographs will make a difference.

For Donald Margulies, this is grist for a powerful drama.  He is a multiple award-winning playwright, having received a Pulitzer Prize for Dinner with Friends, Obie awards for Sight Unseen and The Model Apartment, and several Drama Desk Award nominations.  Time Stands Still garnered two Tony nominations, one for best play and the other for Laura Linney’s performance as Sarah Goodwin (whose name has since  been changed to Goodman).

Despite its serious theme, the characters in Time Stands Still have great affection for each other and can be very funny.  When the play opens, Sarah (Tamara Hickey) and her partner, freelance journalist James Dodd (David Joseph), who have been together for over eight years, are back in Brooklyn, fresh from a dangerous assignment in the Middle East.  Dodd, having suffered a mental breakdown that caused him to return home before Sarah, can scarcely bring himself to write about his experiences because that would mean reliving them.  Sarah, on the other hand, is determined to recover from her physical injuries and resume her job.  The couple’s middle-aged friend and editor, Richard (Mark Zeisler), with whom Sarah had an affair twenty years earlier, is eager to visit her, bringing along his newest fiancée, Mandy (Caroline Calkins), an event planner thirty years his junior, and the subject of much teasing.  We follow these characters over an eight-month period, in which both pairs marry and a baby is born to Richard and Mandy.

The four actors are well-cast and embody fully-rounded, complex characters, thanks to their talent, Margulies’ writing, and Ricciardi’s direction.  Hickey’s Sarah and Joseph’s James, despite their love and desire to be together, are far too damaged to end up happily ever after.  Hickey is sharp-edged, steely, and independent, willing herself to eliminate her feelings; while Joseph’s character is a caretaker, always attempting to make things right, yearning for a comfortable life and a family.  Calkins’ Mandy is guileless, tactless, comic, and very real, saying whatever is on her mind.  But, as the actress says: “She’s the normal, ordinary person. . . . she’s the audience because she comes in and asks the big questions.”  Mandy’s most probing question, directed at Sarah and James is:  “There’s so much beauty in the world.  But you only see misery. . . I wish you’d just let yourselves feel the joy. . . Otherwise. . .what’s the point?”  This is why Zeisler’s Richard is infatuated with Mandy:  he chooses simplicity over brilliance.

Ricciardi and her design team have provided these actors with a world to live in.  John McDermott’s complex and detailed set on the small Bernstein stage miraculously includes a working sink and coffeemaker, four doors, a fully furnished bedroom, a raised kitchen, living and dining rooms, an entryway with a hanging bicycle, two computers, lamps, rugs and a television.  Although there isn’t a great deal of room for the actors, Ricciardi guides them in such a way that every movement seems natural and unobstructed.  Amy Altadonna’s varied soundscape, heard between scenes, incorporates Middle Eastern music (including vocals), traffic on a busy Brooklyn street, and effective mood music.  Costume and makeup designers Charlotte Palmer-Lane and Cal Murphy, respectively, help to concretize Sarah’s injuries.

In a talk back after the performance, the actors discussed their research into the work of photojournalists like Lynsey Addario, who covers human rights and women’s issues in war-torn countries.  They emphasized the specificity of the rehearsals, as they painstakingly followed Margulies’ score:  the beats, the pauses, the silences, and the subtext required to fill them.  These are trademarks of Ricciardi’s careful direction, seen last year in Creditors, which encourages actors to build their characters from the ground up as they mine the text for clues.

It is said that a picture is worth a thousand words.  But this play asks:  “At what cost?”

TIME STANDS STILL runs from September 13—October 13 in the Elayne P. Bernstein Theatre.  Tickets may be purchased online at shakespeare.org or call 413-637-3353.