REVIEW: “What the Jews Believe” at Berkshire Theatre Group 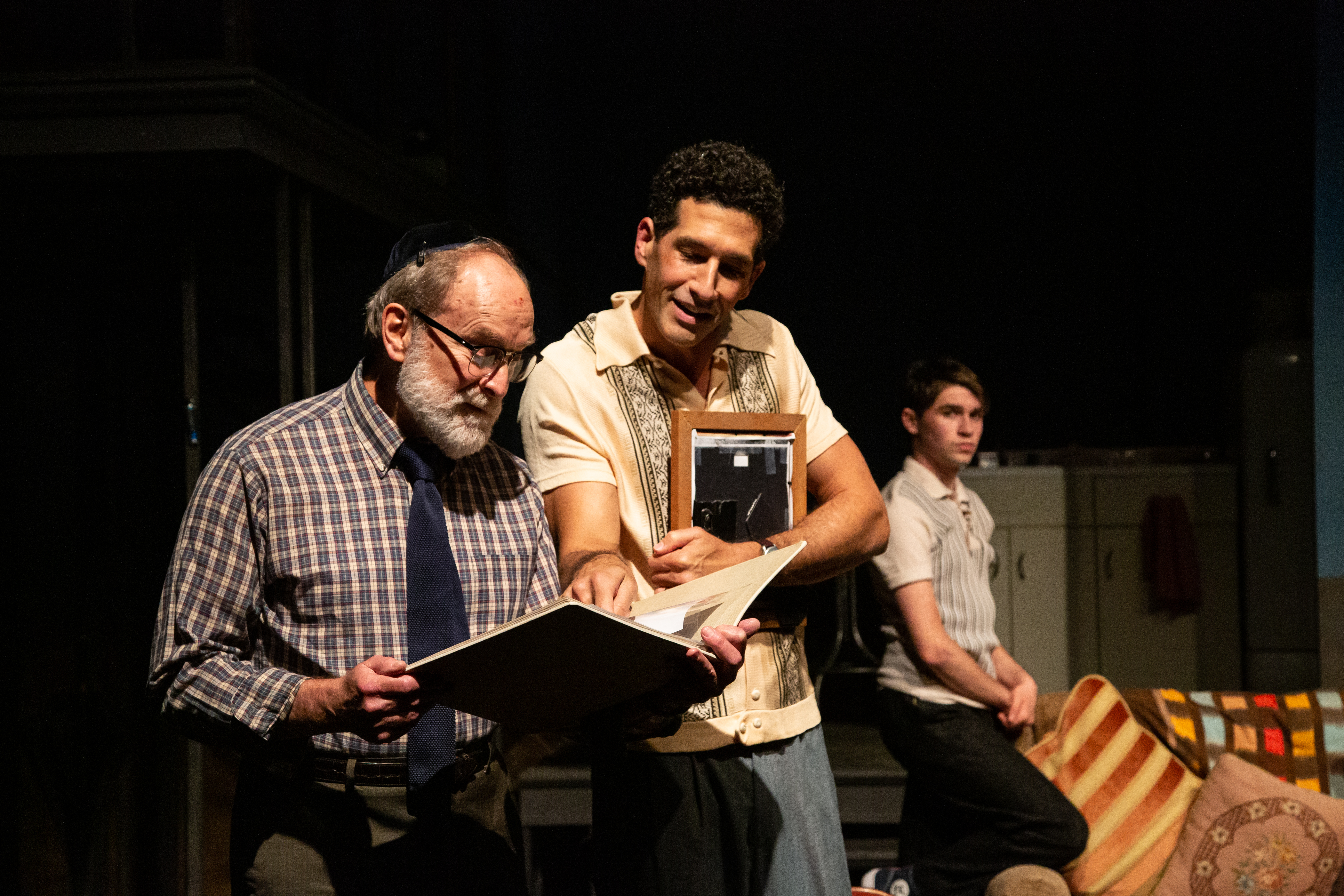 REVIEW: “What the Jews Believe” at Berkshire Theatre Group

Mark Harelik’s sweet and poignant 1985 play The Immigrant has been performed at innumerable regional and off-Broadway theatres.  It is the story of his grandfather when he settled in Hamilton, Texas, outside Galveston in the early 20th century and built a life for himself and his family despite being the only Jews in the town.   A newly revised play originally titled The Legacy, What the Jews Believe, is not quite a sequel but Harelik’s family is at the core of the story.  The current production at Berkshire Theatre Group’s Unicorn Theatre in Stockbridge, Massachusetts, is problematic.  Harelik has staged the play.  Perhaps the director is in love with the playwright’s words because it runs for a long two and a half hours and is in need of judicious cutting.

Dave, Rachel and their son Nathan are still the only Jewish family in Hamilton in the late- 50’s.  Nathan is exasperated while preparing for his bar mitzvah since there is no one nearby to coach him in the Torah portion he must learn.  Rachel’s turmoil is more profound.  She has been diagnosed with cancer with a few months to live.  Dave, despite his ancestry, still does not know what it means to be Jewish but believes that he must continue his cultural heritage by educating his son.  Add to this, Rachel’s Aunt Sarah, a Christian-Scientist.  Any one of these story lines has enough drama to sustain an emotional-laden evening.   Yet they are all given equal weight leading to a diffuse and unsatisfactory theatre experience.

The play opens with Nathan (Logan Weibrecht) describing Moses ascent on Mount Sinai to meet God and to receive the ten commandments.  He is charming, clever and wisely witty in this monologue, qualities that seldom appear throughout the rest of the play.  Nathan loves one-line jokes, especially the “Knock knock” variety, but there are so many at some inopportune moments that they become annoying rather than comic or insightful, which would seem to be the playwright’s reason for their inclusion.

Emily Donahoe’s Rachel is angry at God because she does not understand why He has chosen her to die at age thirty-five.  Her scenes with Dave (Benim Foster) when he vainly tries to comfort her are beautifully played and painful to observe.  Aunt Sarah (Cynthia Mace) introduces Rachel to Christ and a presumably instant remediation occurs.  Donahoe’s transformation is effective though not logically feasible (the playwright’s responsibility.)  Dave’s frustrations with Nathan’s inability to learn his Torah reading exacerbated by Rachel’s fears and anger are sensitively played by Foster.  His scenes with Sarah after her intrusion into Rachel’s condition are intense; Dave tries to restrain himself as the audience empathizes with him in his anguish and grief.  Foster’s work throughout is highly sensitive and well-constructed.

Mace’s Sarah slowly unfolds from a somewhat fussy older aunt reluctantly watching Nathan while Rachel and Dave are in Los Angeles for diagnosis.  She becomes more forceful when advising Rachel to change her religious beliefs so that she may be cured and to live a long life.  As she contends with what she views as Dave’s obstinacy Mace becomes stronger and even more stolid.  It is a performance of subtle nuances.  Robert Zukerman plays Rabbi Bindler who travels from El Paso to coach Nathan but then counsels Rachel as she pleads with him for answers to why God is victimizing her.  His performance evolves from being supportive to Nathan and then frustrated when he can’t console Rachel.

Harelik’s direction collides with his writing.  The rabbi and Rachel sit side by side on a sofa for minutes, which feels much longer, while they debate God’s actions and the role that her Judaism should play in her illness.  Dave is by her side and says virtually nothing through the entire exchange. Despite the actors’ fervency, the scene feels interminable.  The identical thing occurs when Rachel and Sarah are on the same sofa in almost the same positions.  Once again there is little movement for minutes.  Other scenes also feel static.  Harelik’s saving grace is that his entire cast is solid.

Every inch of the playing area, including the aisles through the audience, is used in the set designed by Randall Parsons. There is a scrim that covers half the kitchen perhaps to mask some of the entrances and exits, but it is distracting.  He has also created a second floor bedroom with a window to the roof where Nathan finds solitude.  Hunter Kaczorowski’s costumes indicate the clothes of the mid-twentieth century.  Kim Smith’s lighting and Jeffrey Salerno’s sound add effective complements to the play’s myriad tones.

We never do find out “what the Jews believe” though a panoply of options is offered.

This play has so much to offer if it were tighter and less verbose.