REVIEW: “The Snow Queen” at the Ancram Opera House 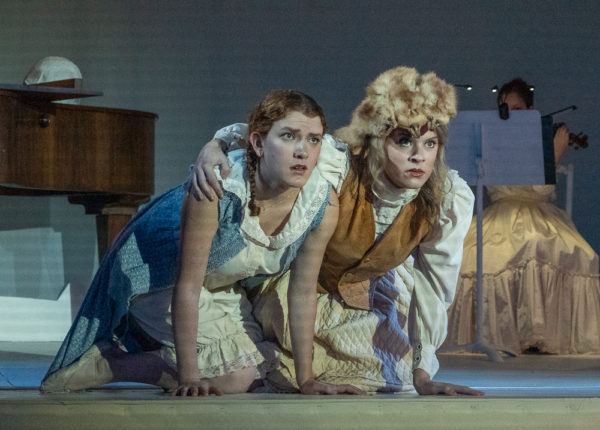 REVIEW: “The Snow Queen” at the Ancram Opera House

Fairy tales never lose their power to affect us, no matter how old we get.  Jeffrey Mousseau’s beautiful production of The Snow Queen at Ancram Opera House both moves and delights us as we root for the good guys to triumph over evil.

Mousseau, co-director of Ancram Opera House (with Paul Ricciardi) and director of The Snow Queen, has partnered with Barbara Wiechmann, his frequent collaborator, who adapted this story from Hans Christian Andersen and wrote lyrics for the music composed by Lisa Dove.  Dove and Wiechmann’s version of this well-known fairy tale has previously been seen at The Kennedy Center, HERE Arts Center in New York City and Siena College.

Andersen’s story is no stranger to adaptations in every form:  animated films, stage plays, musicals, ballets, television shows, video games and operas.  It has inspired C.S. Lewis’s The Lion, the Witch and the Wardrobe and Disney’s Frozen.  Wiechmann’s script differs from the original (written in 1844), mainly in its use of two male narrators:  the Man (James Occhino), who is a writer (perhaps Andersen, struggling against his own demons) and his younger self:  the Boy (Shawn Adiletta).  They are haunted by a recurring nightmare:  the devil’s magic mirror, which distorts everything beautiful into ugliness and turns all good people bad, breaks into a million pieces, lodging splinters of evil into the boy’s heart, freezing it, and into his eye, removing all human feeling and turning him against the people he loves.  When he wakes, the boy is obsessed by the dream of those splinters, seeking a way to remove them, so people will find the good within him.  The man attempts to help the boy by narrating the story of The Snow Queen.

Following Andersen’s story, Wiechmann includes seven sections, featuring a young man named Kai (Adam Basco-Mahieddine), who is the personification of the boy’s nightmare:  it is he who was struck by the splinters and is kidnapped by the evil Snow Queen (Cheyenne See), his dear friend Gerda (a terrific Katie Birenboim), who braves horrendous obstacles in order to save him, and a variety of talking animals, flowers, and strange people.  Three talented musicians:  Elizabeth Gerbi, pianist, musical director and conductor, Louis Rizzo, cellist, and Emma Piazza, violinist, provide the music for both the songs and the underscoring of much of the dialogue.

The contributions of the design team cannot be overstated.  The brilliant Sarah Edkins, set designer, provides a gleaming white snowscape both onstage and below it, creating two different playing areas draped in white fabric.  The boy, a clever storyteller, often uses origami-type cut-outs to enhance his tales.  Edkins has enlarged this technique to create white cut-outs of all different shapes and sizes, which hang from the ceiling of the stage and below, often attached by strings to a track that enables them to be moved.  Costume designer Denise R. Massman has dressed everyone in white—even the floor and music stands are white!—and created fabulous head coverings for both animals (a crow, a reindeer) and people (the silver-jeweled headpiece for the queen, the crazy hat of an old conjuring woman, and the animal skin that dons the head of the Robber Girl).  Lighting designer Ayumu “Poe” Saegusa injects colors in into the landscape through overhead lights and the back cyclorama, and takes advantage of the glass chandelier to suggest the shards of the mirror that has been shattered.  Sound designer Alexander Sovronsky’s effects add to the tension of the piece.

According to Ricciardi, this new work is a “concert with storytelling”—a first-time genre for this compact theatre.  Several actors hold scripts (in the form of pale blue storybooks), including the narrators, and the ensemble.  In a nod to Brecht, Mousseau seats performers on both sides of the lower playing area (on white chairs, naturally) when they are not embodying specific characters.  They contribute sounds when seated, and rise to surround the action in song and story.  Mousseau utilizes every part of the playing area, moving his actors up and down the two side staircases, and the center aisle as well.  Much of the action is mimed while the narrator, usually seated on an armchair below the stage, informs us of what is happening.  But none of this prevents us from becoming involved in Gerda’s desperate attempts to find and save Kai.  Mousseau is well-versed in the use of theatrical techniques and tableaux to capture his audience, though perhaps an intermission (the play runs two hours), given the fact that the play is divided into several segments, might have been helpful.

The performers are a joy to watch—they are 100% committed to these fantastical characters and events.  The action unfolds through narration, dialogue and song.  The play feels more like a story with music rather than a musical:  the songs further the plot but are not particularly memorable, except for the final one, which leads to a moving ending.  There are traces of The Wizard of Oz in Gerda’s blue dress, red shoes, and the fact that despite the help she receives along the way, the power to save her friend is within her.

There are several standouts among the company:  first and foremost Birenboim as Gerda, whose beautiful singing voice and heartfelt struggle immediately engage us.  Surprisingly there is humor sprinkled throughout the work as evidenced by Brian Demar Jones’ Crow, with his intellectual veneer, David Perez-Ribada’s reindeer, Bac, whose outsized machismo leads him on to more and more dangerous deeds, Lauren Bell’s Robber Girl, who parades her bloodthirstiness even as she saves Gerda, and the competition between Occhino’s Man and Adiletta’s Boy, as they vie to determine who is the real narrator.  Narrators have to decide whether to be unobtrusive observers or actual players. One of the most effective aspects of James Occhino’s Man is how he reacts to everything that happens—his sympathy for the plight of the heroes, for the boy within and without, the emotional involvement of his words as he tries to keep up with swelling music and passionate dialogue, and the peaceful slumber (is it slumber?) when all is resolved.

After years of battling against evil, we are told that the young man and woman, reunited, are now “very old but still children.”  That’s how the Ancram audience feels and that’s why this production will appeal to everyone.  Think of a circus ringmaster’s opening line:  “Ladies and gentlemen and children of all ages.”