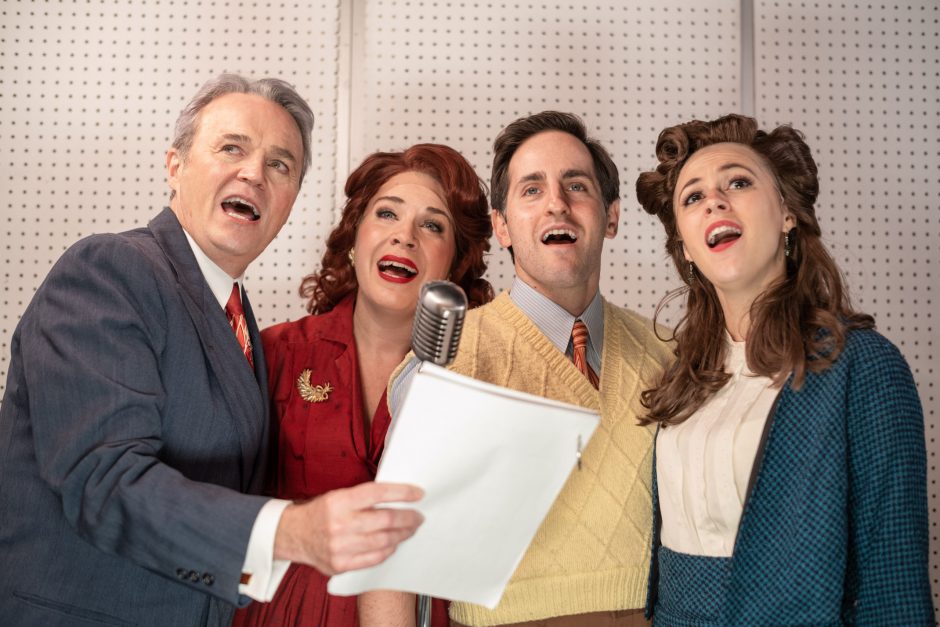 Frank Capra’s It’s a Wonderful Life, it may surprise you to learn, did not do well at the box office when it was released in 1946. Arguably one of the most cherished American movies ever made, it has since become an international favorite, traditionally watched during the Christmas season.

Capital Repertory Theatre’s current production, It’s A Wonderful Life: Live from the WVL Radio Theater, takes place at a radio station in 1948, in an unnamed small town in upstate New York. The premise: a live radio broadcast is in danger of being waylaid, the result of a snowstorm that prevents key players from commuting to the radio station. To save the show, some non-actors, including a Foley (sound effects) artist and an office assistant, join the two actors present to read the script, each playing multiple roles.

Obviously, the likelihood of patched-up performers and amateur actors pulling off such a project is very low. But the cast of four (and two musicians) is so charming and so entertaining that I had no trouble suspending my disbelief, nor did the cheering audience who rose at the end of the show.

Director Margaret E. Hall expertly steers her top-drawer cast as they navigate through a script that could become tiresome in less talented hands. The pacing is crisp and each of the four actors is thoroughly distinctive. As Foley artist Lee Wright, Carl Howell has an endearing, sweetly awkward quality that makes him the obvious choice to play the role originated by Jimmy Stewart, George Bailey. As Evelyn Reed, the boss’s daughter/office assistant, Elizabeth Nestlerode is a perfect foil for Lee. The two are infatuated with each other and too introverted to let on, but as Evelyn is called upon to play Mary Hatch, the woman with whom George falls in love, the two cannot help but collide in the most innocent, romantic way.

Wynn Harmon as soon-to-be-reformed cad H. Christopher Mays is often uproarious and always entertaining as he abruptly changes myriad roles, from the villainous Mr. Potter to Clarence the Angel to one of the Bailey children, and his perfect foil, the sultry, sassy Laurie Wells as Kitty Dayle, effortlessly shifts from bad-girl Violet to little Zuzu to a host of other characters.

As the radio actors are responsible for sound effects, we’re treated to an exhibition of Foley arts, which include a wind machine (a drum with a crank), footsteps created by hands inserted into shoes, a crash box, and much more. To add to the fun, the four sing authentic commercials from the era (and they all sing beautifully), accompanied by studio musicians Josh D. Smith and Harry Lumb.

Thanks to Evan Prizant’s costumes and Michael Dunn’s wigs, all of the characters look perfectly 1948-ish. Rob Denton’s lighting design and Rider Q. Stanton’s sound design enhance the experience gracefully. Set designer David McQuillen Robertson has provided some lovely, evocative details that would feel completely on target for a studio of that era, with one major problem. There is a very large, multicolored neon structure of Art Deco lines somewhat left of center stage. When I entered the theater before the show, I found the neon structure pleasing. Once the show began, however, the bright neon looming over the actors was annoyingly distracting; I couldn’t watch the action onstage without seeing the neon. It dominated everything else. I wish that the neon could have been turned off during the show and displayed only before the show and during intermission.

I don’t think I know anybody who is unfamiliar with the Capra classic, but I would imagine that the play would be confusing to someone who has never seen the film. Aside from that caveat, I think It’s A Wonderful Life: Live From WVL Radio Theater is a real charmer, sweetly upbeat holiday entertainment, and who among us couldn’t appreciate that during these challenging times?

November 26: Opening Night
Stay after the show for desserts from Bella Napoli and champagne (or ginger ale) toast with the cast and crew!
December 3: Chef’s Table Night
Hungry for a pre-show snack? Enjoy complimentary light bites before the show provided by Olde English Pub! Samples servings begin at 6:30 p.m.
December 7: American Sign Language Interpreted Show (3:00 p.m Matinee)
Watch as the show is also signed for our hearing-impaired patrons. This performance will feature a sign language interpreter. To request access to this section, please call our box office at 518.346.6204
December 11: Post-Show Discussion
Following the show, we will host a post-show discussion with Maggie Mancinelli-Cahill Producing Artistic Director plus the cast of It’s A Wonderful Life: Live From WVL Radio Theatre. Stay around after the show to ask questions and speak to the cast.
December 12: Thirsty Thursday
Before the show, enjoy complimentary alcoholic samples from Albany Distilling & Nine Pin as well as lite bites from Ama Cocina from 6:30 – 7:30 p.m.
December 15: Behind the Scenes
A pre-show discussion with Producing Artistic Director Maggie Mancinelli-Cahill at 12:30 p.m. and includes a light pre-show snack.

Accessibility
At theREP, we aim to make theatre accessible for all. For It’s a Wonderful Life, we are proud to offer four options for hearing impaired individuals.

Saturday, December 7, 3 pm
Interpreted Performance
This performance will feature a sign language interpreter. To request access to this section, please call our box office at 518.346.6204