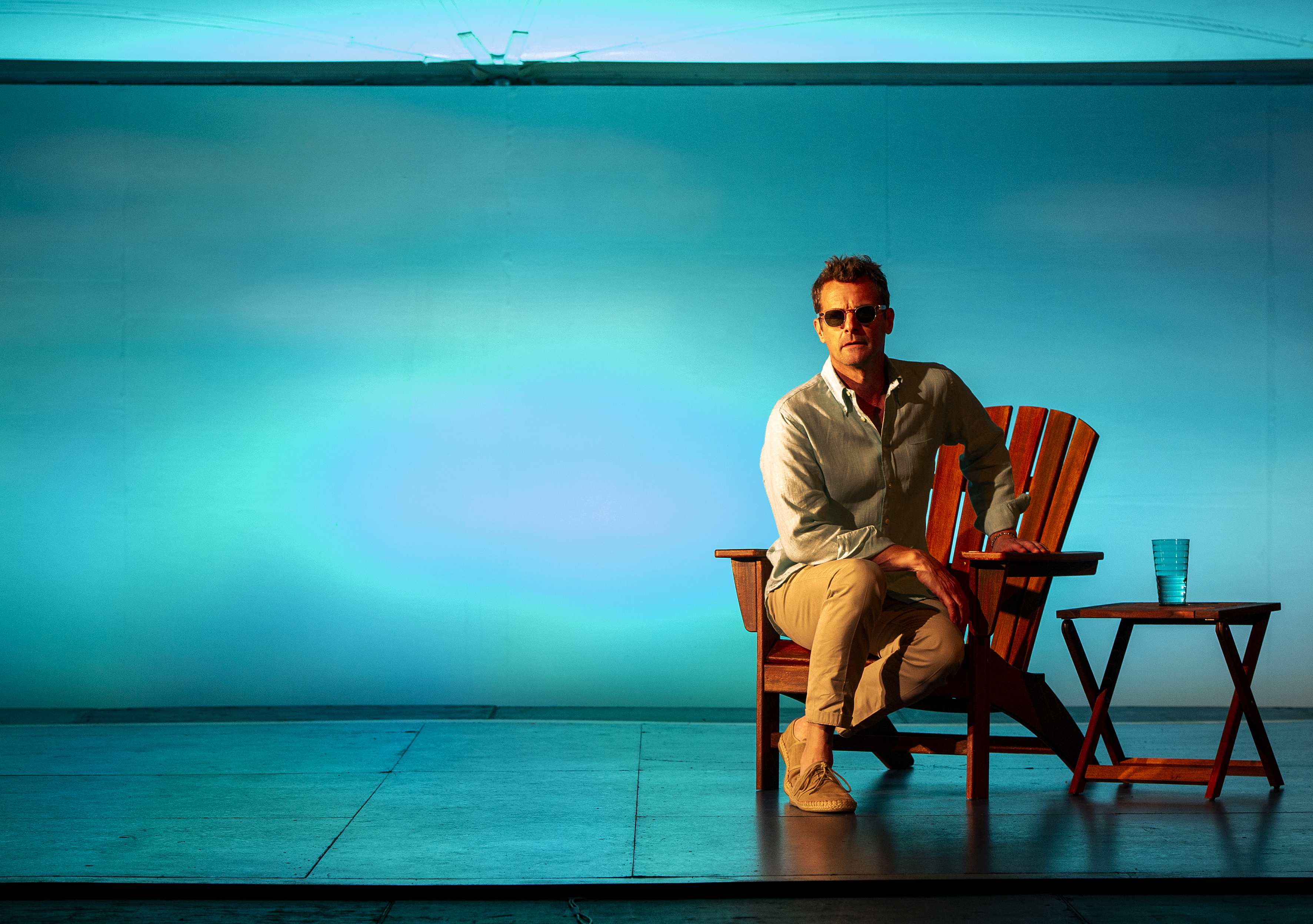 The one-man play, Harry Clarke by David Cale, featuring Mark H. Dold and produced by Barrington Stage Company, is receiving an insightful and enthralling production at the Tartell Family Outdoor Stage diagonally across from the Mark St. Germain Stage on Linden Street, Pittsfield.

At the age of eight Philip Brugglestein mutates into Harry Clarke – a Brit, complete with accent.  This is done both to avoid and torment his abusive father.  His mother dies when he is thirteen, the father when he is eighteen.  Taking the money from the sale of their house in South Bend, Indiana, Phil, who has repressed Harry, moves to Manhattan where he lives an aimless life.

One day while ambling through the streets of the city Phil spontaneously decides to follow a man from place to place including The Gap and Dean and Delucca, where he listens to the man’s cell phone conversations slowly collecting information about him.  Then he abruptly leaves the restaurant.

Several months later Phil, sitting in an off-Broadway theatre, stares at this man and, as he crosses the aisle becomes Harry with his accent, and says, “…I think we’ve met before.”  Harry Clarke meets Mark Schmidt.  Harry provides a fictional reputation that includes being “…tour manager slash personal assistant slash whatever-else-was-needed type person for a recording artist in England,” who turns out to be Sade.

Mark introduces Harry to his family – the father (who shortly passes away,)  mother Rose, and sister Stephanie.  The women fall into Harry’s web while Mark’s personality is transformed from a stable businessman in to something more unstable.

The play focuses on identity.  Who are we?  How many other people do we have inside us?  What has made us who we are?  As Phil/Harry goes through his life his two personalities surface when circumstances call.  The way he handles relationships depends on who he is at a particular moment.  As he says, “…it’s your life.  Least you should be able to do is choose your own name.”

All the characters in the play… Phil/Harry, all the Schmidts and several others are brought to life by the masterful work of Mr. Dold.  His voice changes with each character even if it’s only one line.  Not only does he endow each with a different vocal quality but his face and physicality also change.   Every gesture defines the emotion or the thought process of the moment.  Dold’s performance is vibrant as he brings the audience into the lives of playwright Cale’s myriad characters.

David Lander’s lighting is provocative, complementing the tone of each scene by using myriad color washes and spotlights.  The sound design by Alexander Sovronsky seduces the audience the moment they enter the theatre; it is diverse as it utilizes original music by playwright Cale, Hang on to Your Love by Sade, and various classical selections.  The production under the direction of artistic director Julianne Boyd is tight and simply staged.

Though there are occasional distractions from the ambient sounds of the street, Harry Clarke is brought to colorful life through the immense talents of Mr. Dold and Ms. Boyd.