REVIEW: “The Irish…And How They Got That Way” at Capital Rep 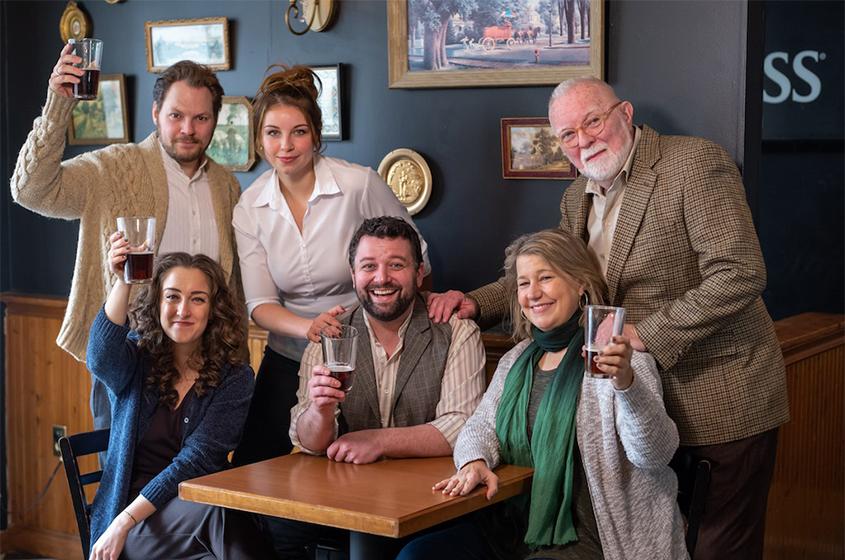 REVIEW: “The Irish…And How They Got That Way” at Capital Rep

As you enter the theater you’re immediately drawn to the warmth of Brian Prather’s meticulously designed Irish pub, right where Capital Repertory Theatre’s stage used to be. You’re invited to order a pint and stand at the bar (or sit at one of the tables) where maybe a half-dozen audience members are already chewing the fat with some effervescent folks you learn are members of the cast. During her curtain speech, director Maggie Mancinelli-Cahill cheerfully lets you know that audience members are welcome to stay in the pub through the opening number before leaving the stage. One woman lingers at her table; a cast member diplomatically escorts her offstage.

So begins the final show at theRep’s current digs. After 38 years, the theater is relocating up the street. And although I didn’t know it when I saw The Irish…And How They Got That Way on opening night, the current restrictions on public gatherings would force the show to close after only two more performances. I feel lucky that I had the opportunity to participate.

The late Frank McCourt, celebrated author (of the unforgettable memoir Angela’s Ashes, among other books), teacher, and performer, first created the work for the Irish Repertory Theatre, where it premiered in 1997. A show that interweaves Irish and Irish-American songs, stories, and history, each member of the ebullient six-member cast (Kevin McGuire, Emily Mikesell, Patrick John Moran, Josh D. Smith, Caroline Whelehan, and Lauren Wright) is brimming with talent. Mancinelli-Cahill has brought together a thoroughly charming group of actors who also happen to be expert singers, dancers, musicians, and storytellers.

The Irish… is, at turns, raucous, sentimental, funny, and moving, and boy! Does it move! Freddy Ramirez’s snappy choreography celebrates Irish dance and helps steer the expert pacing devised by Mancinelli-Cahill. The wide range of songs, all familiar, combines traditional Irish folk music, popular music, and show tunes, everything from I’ll Take You Home Again Kathleen, No Irish Need Apply, Who Threw The Overalls in Mrs. Murphy’s Chowder, and a generous sampling of George M. Cohan. In the salute to Cohan, the cast wittily plays the Cohan family, and it was such a pleasure to watch Patrick John Moran recreate George M. Cohan’s signature cocky, stiff-legged dance style. (You’re familiar with it if you’ve ever seen James Cagney in the film Yankee Doodle Dandy.) Moran broke my heart with his gorgeous Irish tenor when he sang Danny Boy, but I must admit, I’ve long been a sucker for that song.

I suppose you can’t have a show about being Irish without at least a bit of sentimentality, but there were a few times when the sentiment slid perilously close to the mawkish. Throughout the evening, projected photographs and bits of film, nicely designed by Nathan W. Scheuer, enhanced the storyline. A  look at the life and death of John F. Kennedy was far too long, and I believe it would have been more effective in a shorter sequence. Later on a lengthy photomontage of people with varying degrees of Irish heritage was ineffective and even distracting (I mean, James Joyce, Bing Crosby, Barack Obama, Frank McCourt, and Britney Spears…).

As is so often the case with theRep, the technical side of the show was first rate. Travis McHale’s lighting design was warm and evocative, and Rider Q. Stanton’s sound design seemed flawless, as did Miranda Kau Giurleo’s costumes.

The closing of theaters, though temporary, worries and saddens me, as I expect it does most of you. Let’s be especially kind to each other during this period, and let’s not flag in our support of the arts. If you have tickets to a show or event that has been cancelled, please consider donating the cost of the ticket if you can afford it, rather than getting a refund. The theaters and the people who keep them afloat are going to be hit especially hard.