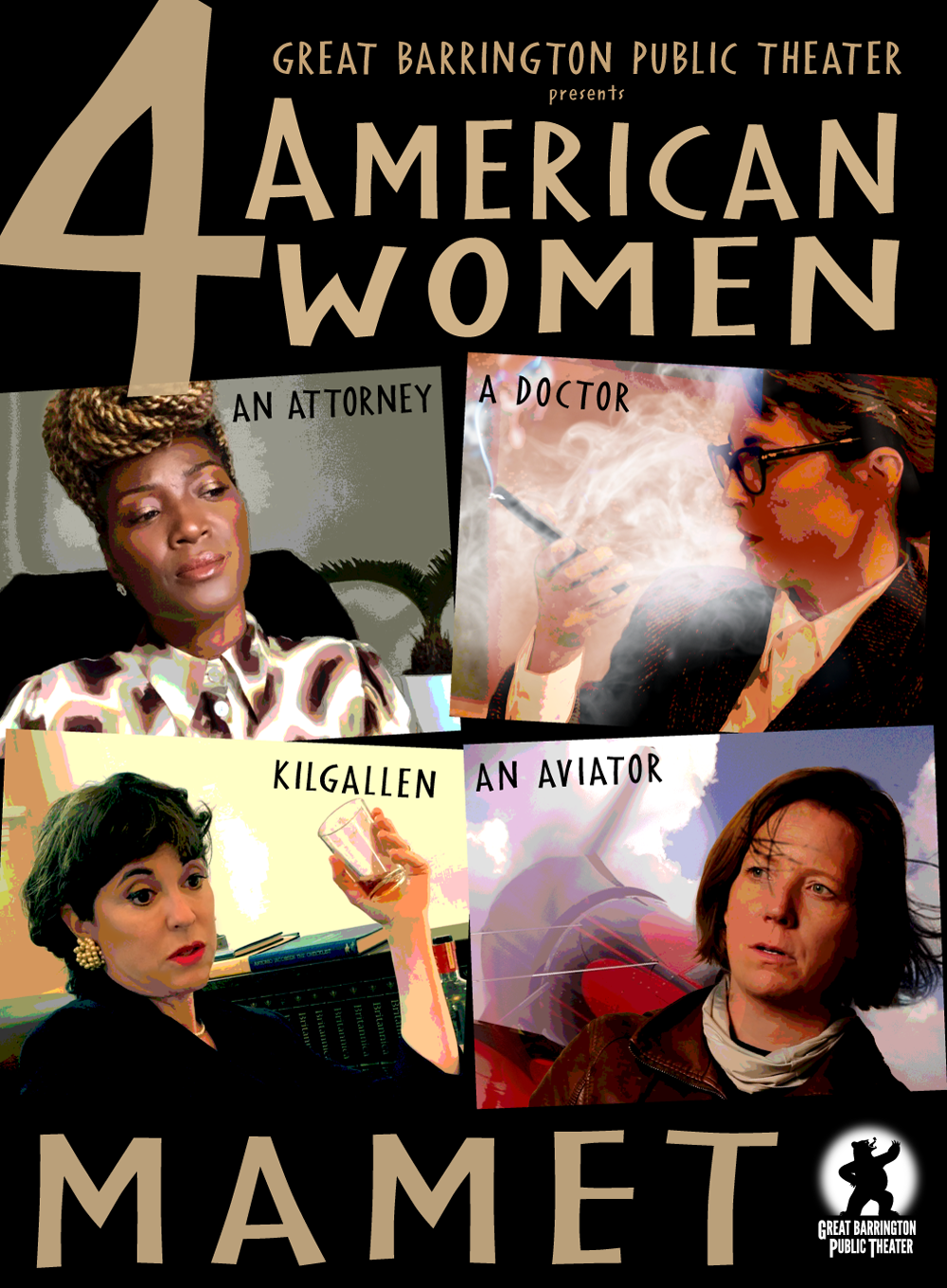 Great Barrington Public Theater opens the 2021 season with a play-length series of brand-new monologues by David Mamet that deliver intrinsic American voices and stories in the words of two famous and two anonymous women. The on-camera, solo performances are self-recorded, allowing audiences and artists to come together remotely to bring four distinct women to life.

“Beverly Wilshire Hotel. His shoes fit. I took his shoes.” An Aviator

Great Barrington Public Theater Artistic Director Jim Frangione describes Four American Women as “A riveting portrayal of American character depth and personality. This is David at his leanest, exacting and freest to plumb some untouched corners of the modern American character and mindset. Since the implementation of safety protocols and the closure of curtains, we, and everyone in the theater world, have pivoted to the challenge. Over recent months we successfully produced two different screen series, and are now thrilled to premiere Four American Women for audiences everywhere.” The Broadway on Demand release is a pay-to-screen, view-on-demand benefit performance to help sustain the company’s work and artists in preparation for this season’s planned, on-stage performances.

“I think more people are watching me. Well, yes they are.”  A Doctor

“And it is always someone else.”  An Attorney

“With David’s guidance and our artistic production team working remotely but closely with the performers, we have assembled four provocative, cut-to-the bone personalities who will satisfy theater lovers looking for the character and dialogue David excels at.  With their powerful, nuanced screen performances. Rebecca, Heidi and Yolonda take David’s precision with language to new places.”

“This life is a sin, otherwise it’s not life.”  Dorothy Kilgallen

Four American Women can be reserved online beginning April 15, for on-demand, pay-to- view April 26th-May 9th on Broadway on Demand, streaming on Roku, Apple TV, Amazon FireTV, for iPhone, Android, Google Chromecast. Reservations are $24 for a 48-hour viewing window. This is an Equity Stage Actors performance, so the number of screen views is limited. Early Reservations are strongly encouraged.

Great Barrington Public Theater was founded by Jim Frangione and Deann Simmons Halper to create opportunities for theater artists in the Berkshires and neighboring regions. Great Barrington Public Theater recognizes the many excellent playwrights, actors, directors, designers, administrators and technicians living in the Berkshires and surrounding areas. Our objective is to bring a mix of new and contemporary plays to the stage in a variety of formats; to generate and foster creative and rigorous opportunity for local theater artists, while engaging our theatergoing public with new and contemporary readings, workshops, and fully-staged productions, involving local talent as often as possible and keeping ticket prices affordable.

Jim Frangione (Artistic Director) After more than ten years developing new plays with Berkshire Playwrights Lab, Jim is excited about the emergence of Great Barrington Public Theater as it heads into its second season. He directed Anne Undeland’s acclaimed new play, Lady Randy, at the Elayne P. Bernstein Theatre at Shakespeare & Company in Lenox; David Mamet’s Romance at Wellfleet Harbor Actors Theater; Private Life at HERE Arts in NY; and An Evening of Shorts by Mamet, Pinter and Silverstein at the ART/Harvard Institute for Advanced Theatre Training. Jim’s play ­Breakwater, the second if his trilogy of Cape Cod plays received its premiere last June at the Daniel Arts Center at Simon’s Rock (Berkshire Theatre Critic’s Nomination) His play, Flight of the Monarch, received its world premiere at Gloucester Stage Company in 2017. Jim has acted for over 35 years; Off-Broadway at the Orpheum Theater in the original production of Oleanna, as well as the National Tour; in many plays with the Atlantic Theater Company, on Broadway and at regional theaters such as The Mark Taper Forum, Long Wharf, Alley Theater, Berkshire Theatre Festival, Actors Theatre of Louisville—and most recently in David Mamet’s Prairie Du Chien at Atlantic and Vanya and Sonia and Masha and Spike at Shakespeare & Company. Jim’s film work includes Joy; Transamerica; Spartan; Heist;, State and Main; The Spanish Prisoner; Homicide; Suits; Claire Dolan and Maryam

Deann Simmons Halper (Executive Director)is an actor, director and producer. She has produced several New York and Regional productions including the OBIE-nominated Incommunicado and The Vagina Monologues. Halper has served on the board of directors for Circle Rep, New York Stage and Film, TriArts’ Sharon Playhouse, Barrington Stage Company and Berkshire Playwrights Lab, and she is currently on the board of directors for Space on Ryder Farm and Board of Visitors at the University of North Carolina School of the Arts. Most recently Halper has appeared in QWERTY at Mixed Company; Death and the Maiden at New Stage; Four Dogs and a Bone with Berkshire Actors Theatre; and The Attic, The Pearls and Three Fine Girls at WAM Theatre, among many others.

David Mamet (Playwright)is the author of the plays: The Anarchist, November, Boston Marriage, Faustus, Oleanna, Glengarry Glen Ross (1984 Pulitzer Prize and New York Drama Critics Circle Award), American  Buffalo, Race, The Old Neighborhood, Life in the Theatre, Speed-the- Plow, Edmond, Lakeboat, The Water Engine, The Woods, Sexual Perversity in Chicago, Reunion and The Cryptogram (1995 Obie Award). His translations and adaptations include Faustus, Red River by Pierre Laville and The Cherry Orchard, Three Sisters and Uncle Vanya by Anton Chekov. His films include The Postman Always Rings Twice, The Verdict, The Untouchables, House of Games (writer/director), Oleanna (writer/director), Homicide (writer/director), The Spanish Prisoner (writer/director), Heist (writer/director), Spartan (writer/director) and Redbelt (writer/director). Mamet is also the author of Warm and Cold, a book for children with drawings by Donald Sultan, and two other children’s books, Passover and The Duck and the Goat. His most recent books include True and False, Three Uses of the Knife, The Wicked Son, Bambi Vs. Godzilla, The Secret Knowledge and the shoot-em-up novel of Prohibition, Chicago.

Rebecca Pidgeon (Dorothy Kilgallen and A Doctor) has starred in the films The Dawning, The Spanish Prisoner, The Winslow Boy, State and Main, Heist, Red, Two Bit Waltz and Allegiant. Her television credits include HBO’s Phil Spector and Jesse Stone: Sea Change. She had recurring roles on The Unit and The Shield and played a regular role on In Justice. She starred in Uncle Vanya for the BBC, and in Samuel Beckett’s Catastrophe opposite Sir John Geilgud and Harold Pinter for Channel 4. Ms. Pidgeon originated the roles of ‘Deeny’ in The Old Neighborhood on Broadway, ‘Claire’ in Boston Marriage at the Geffen Playhouse and ‘Carol’ in Oleanna Off-Broadway. Other theater includes: Sex With Strangers (Geffen Playhouse), The Anarchist (Sheen Center), The Penitent (Atlantic) and The Christopher Boy’s Communion (Odyssey).Pidgeon is also a singer/songwriter whose album Slingshot was nominated for a Grammy Award. Her latest album is Sudden Exposure To Light.

Heidi Sulzman (An aviator) film credits include the Oscar nominated film Hell or High Waterappearing as Ranger Margaret opposite Jeff Bridges. Last year’s Adopt a Highway with Ethan Hawke and 2018’s 6 Balloons with Abbi Jacobson which was nominated for the Game Changer Award at SXSW. Theatre Credits include One in the Chamber for which she won the L.A. Drama Critics Circle Award for Best Lead in a Play. The play also garnered a Drama Critics Circle Award for Best New Play by Marja-Lewis Ryan. In 2015 she was honored to perform opposite Rebecca Pidgeon in David Mamet’s The Anarchist at the Sheen Center in New York and she is very excited to be back working alongside Rebecca in4American Women. It has been an ABSOLUTE thrill to get to work on this project with David Mamet and Jim Frangione and delve into the role and real life of Pancho Barnes. What an incredible woman. Thank you for this amazing opportunity, Dave and Jim! I am forever grateful.

Yolonda Ross (An attorney) is a two-time Film Independent Spirit Award nominee and Gotham Award winner for her feature film debut as a leading actress in HBO’s Stranger Inside and John Sayles’s Go For Sisters. Ross, a native of Omaha, Nebraska is recognized from her wide range of work including: Angela Bassett’s Whitney, and Denzel Washington’s Antwone Fisher Story. In Television, she’s worked on Pulitzer Prize winner David Mamet’s, The Unit. The two teamed up again on HBO’s Phil Spector. Ross has recurred as “Claudia” on How To Get Away With Murder, portrayed the memorable “Ms. Green”, in the Baz Luhrmann/ Netflix series, The Get Down, and played a documentary filmmaker in HBO’s Treme which inspired her to step behind the camera for her directorial debut, Breaking Night, which aired on VH1 Classics. Ross is also a member of New York’s famed Labyrinth Theater Company. Currently, she is featured in the PBS American Masters episode How it Feels To Be Free, about black female trailblazers and as series regular, “Jada Washington” in the critically-acclaimed Lena Waithe Showtime drama The Chi, premiering season four in 2021. Yolonda will be making her feature film directorial debut with her romantic drama, Scenes From Our Marriage, which was chosen for Film Independent’s, Fast Track & Directors’ Lab. Website- YolondaRoss.com