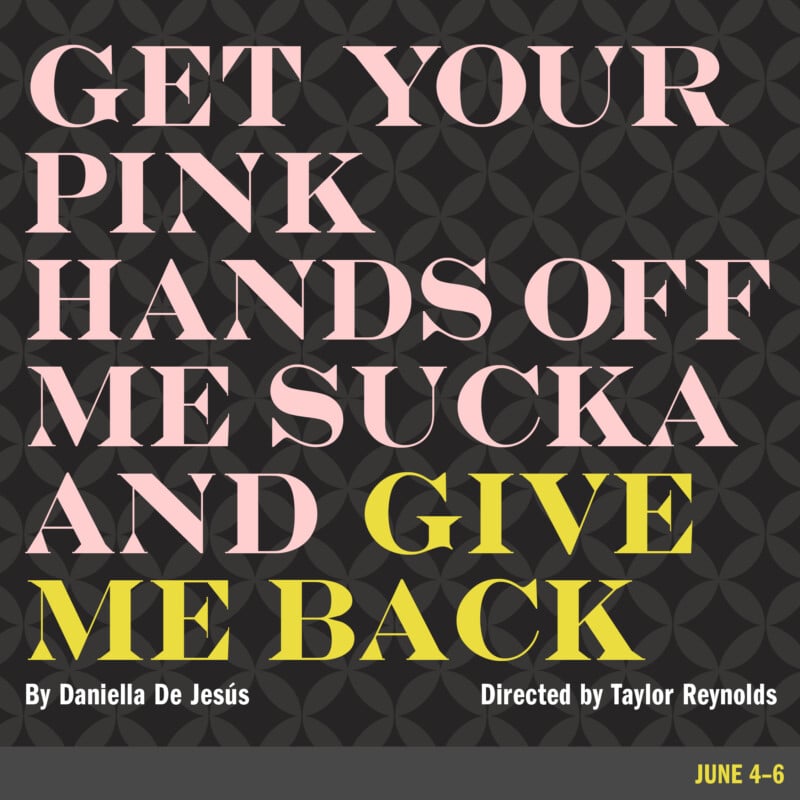 (Pittsfield, MA – May 2021) – Barrington Stage Company (BSC), under the leadership of Founder/Artistic Director Julianne Boyd, is pleased to announce casting for Get Your Pink Hands Off Me Sucka and Give Me Back by Daniella De Jesús, the Grand Prize winner of the 2021 Bonnie and Terry Burman New Play Award. Directed by Taylor Reynolds, the streamed virtual reading will be presented June 4-6, 2021.

“I’m so grateful to have had this opportunity to totally rework this script and finally have a version of it that I’m proud of,” said Daniella De Jesús. “I’ve been blessed with a stellar team of collaborators that have taught me so much about this play, and I’m thrilled to share what we’ve been working on!”

Bonnie and Terry Burman said in a statement, “Get Your Pink Hands… is a very innovative way to inform people of what history looks like from the perspective of the conquered versus the conquerors, and it is particularly relevant at this moment.”

Solandra, a Dominican-American student, is alone in the throne room of Queen Isabel and King Ferdinand when their portraits come alive, poking and prodding and ready to party like it’s 1492. Meanwhile, on the island of “Hispaniola,” Anacaona is awakened by a violent nightmare of pink-skinned “ghosts” invading her village. Enter Christopher Columbus and his crew of brutish bros. As Anacaona struggles to save her community from invasion, Solandra contends with her racial identity and attraction to white men in this dark comedic exploration of the insidiousness of colonization.

Get Your Pink Hands Off Me Sucka and Give Me Back will feature Janice Acevedo (A Sketch of New York) as Solandra/Higuamota, Keith Contreras (“Law & Order: SVU”) as Tour Guide/Bartolome, Matt DaSilva (NYTW’s Endlings) as Christopher Columbus/Columbus Statue, Dan Domingues (Caesar and Cleopatra) as Juan/Spanish Visitor, Gizel Jimenez (Wicked) as Nana’ni/Young Woman, Jessica Pimentel (“Orange is the New Black”) as Portrait of Isabel/Anacaona, Andres Quintero (Giant) Portrait of Ferdinand/Caonabo and James Hayden Rodriguez (The Lightning Thief) as Bohechio/Brenda. Iván Dario Cano is the Production Stage Manager, Christopher Castanho is the Video Editor and Branden Huldeen is the Artistic Producer.

Daniella De Jesús is an actor/writer from Bushwick, Brooklyn. A member of The Public Theater’s 2018-19 Emerging Writers Group, her plays include Mambo Sauce (The New Group Off Stage, semi-finalist for Clubbed Thumb’s 2018 commission), Pa’ Ti Tengo De Todo (The Public Theater’s Spotlight Series), Untitled Puppet Show (commissioned by The Public Theater for Play at Home) and The Thief Cometh (United SoloFestival). She’s also the creator of the new web series “Talk to Me” on IGTV.  As an actor, she is best known for her role as Zirconia on Netflix’s “Orange is the New Black.” De Jesús is a graduate of NYU Tisch School of the Arts with a BFA in Drama.

Barrington Stage thanks Bonnie and Terry Burman for recognizing the importance of discovering and supporting vital new voices in the American Theatre. The awards, founded in 2018, are presented to an unproduced full-length work that is wholly original and not an adaptation or translation of an existing work.

Please call the box office for more information. Single tickets can be purchased by calling 413-236-8888 or visiting www.barringtonstageco.org.

Following the industry-wide shutdown due to the coronavirus pandemic, BSC was the first Equity theatre in the US to return to live performance with its critically acclaimed production of Harry Clarke, starring BSC Associate Artist Mark H. Dold and directed by Ms. Boyd. The season also included the acclaimed concerts, The Hills Are Alive with Rodgers & Hammerstein and Leslie Kritzer: Is It Over Yet?, the virtual benefit reading of Rob Ulin’s new play Judgment Day, a virtual staged reading of the new play Eleanor by BSC Associate Artist Mark St. Germain, a reading of Three Viewings by Jeffrey Hatcher, a reading of St. Germain’s Typhoid Mary, and BSC’s Holiday Getaway. This year, the company’s streaming productions also have included the critically acclaimed 10th anniversary 10×10 New Play Festival, and readings of the commissioned work Mother’s Day (April 9-11) by Bekah Brunstetter and the Barrington Stage Company’s Youth Theatre’s production of The Laramie Project (April 23-25).