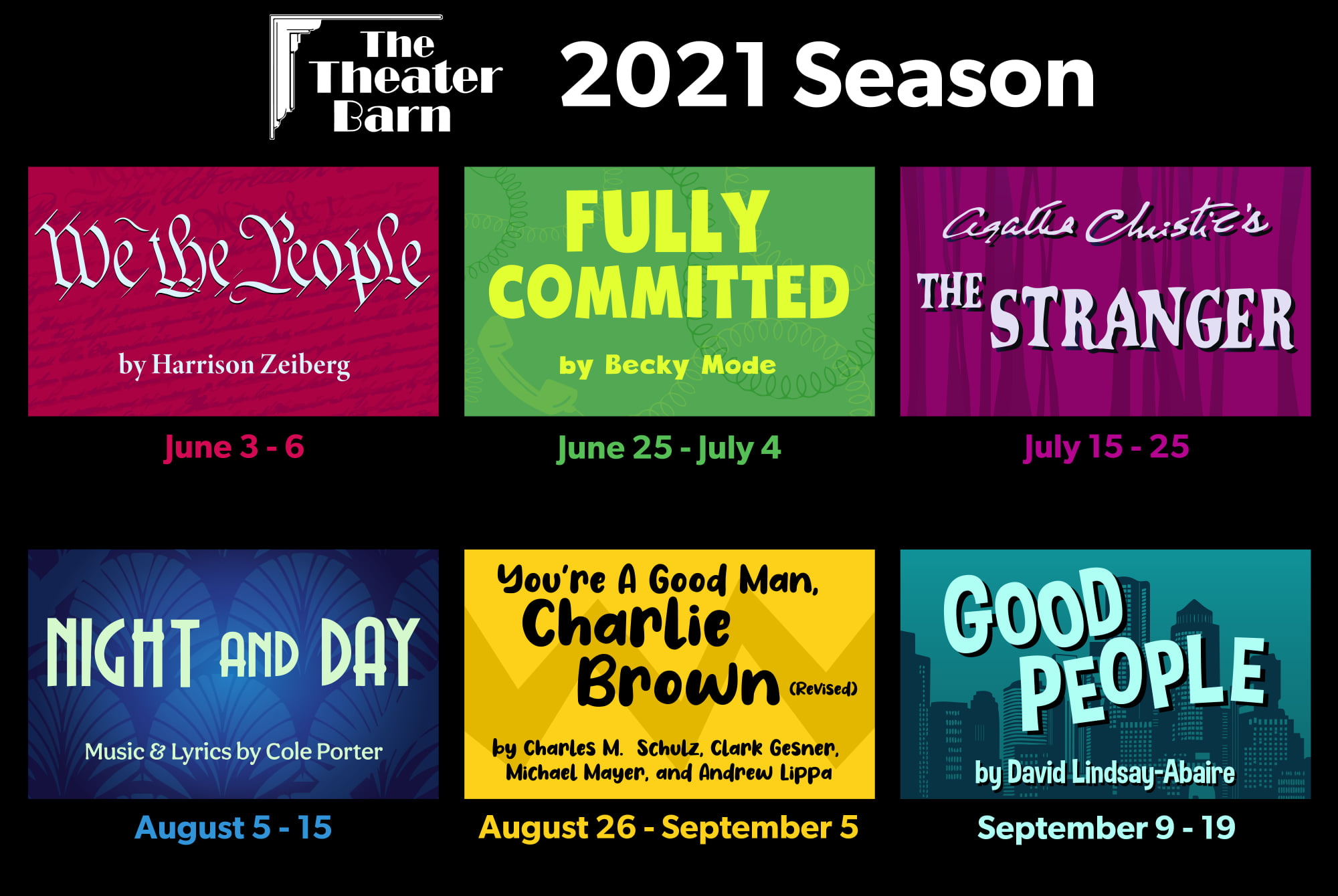 New Lebanon, NY (May 1, 2021) — The Theater Barn is pleased to announce that their 37th Anniversary Season will open on Friday, June 3, 2021 at 8pm with “We the People” by Harrison Zeiberg.  This historical fiction brings us to the Constitutional Convention in Philadelphia in 1784 as our founding fathers begin to create a new nation. The play which won a National New Works Award was presented virtually by the Actor’s Fund in 2020. The plot reveals the biased and flawed characters of seven founding forefathers as they debate the articles of the constitution.

This fictional retelling will be a staged reading with some of the ‘Barn’s most beloved actors. The audience is invited to join the cast and crew for wine and hors d’oeuvres after the show opening night.

Up next is “Fully Committed” by Becky Mode. This wildly funny one-man play centers on a struggling actor who works as a reservation clerk at a chic Manhattan restaurant. One man takes on 36 characters and it all takes place during an extremely busy shift, during which he is forced to deal with coworkers, friends, family, his wayward agent, the restaurant’s extremely temperamental chef and a host of demanding customers who are dying to get into the posh, over-booked eatery.

The annual tradition continues at the ‘Barn with a Berkshire premier by Dame Agatha Christie.  Based on her short story, “Philomel Cottage,” “The Stranger” is a haunting psychological affair and offers an early look at Christie as a young and vibrant writer of murder and mayhem.

The first of three musicals “Night and Day: Love Lost and Found Through the Eyes of Cole Porter” is an originally conceived romantic comedy featuring the music and lyrics of Cole Porter, and spins a romantic story of a love affair gone awry that is just ‘Too Darn Hot’ to miss!

Good grief! Next on stage at the ‘Barn is “You’re a Good Man, Charlie Brown” (1999 Revival) based on the comic strip PEANUTS by Charles M. Schulz. Charm, wit, and heart fill the theater through the eyes of the Peanuts gang. This 1999 revival includes a few new scenes and songs, but still has much of the 1967 classic charm and is guaranteed to please audiences of all ages!

The fall season encore at the ‘Barn is David Lyndsay-Abaire’s 2016 Tony Award® winning comedic play, “Good People,” straight out of Boston’s infamous ‘Irish Southie’ neighborhood.  Poignant and brave, the humor abounds in Lyndsay-Abaire’s focus on what it means to be down on your luck in our world today.

This season marks the promotion of Allen Phelps into the role of Producing Artistic Director. Previous and beloved producers, Joan & Abe Phelps have stepped away from producing and are now serving as executives on the board of directors. Jon Earle, who has been with theater since 1992, has stepped into the role of Associate Producing Director and newcomer, Monica Bliss, former Artistic Director at the Whitney Center for the Arts, has joined the line-up as Associate Artistic Director. Both Artistic Directors will appear on stage this summer. Allen Phelps will play Butter the Butler in “Night and Day,” and Monica Bliss will play Mrs. Huggins the Maid in “The Stranger.”

Since 1984, The Theater Barn has a tradition of producing high quality, family friendly plays, comedies, mysteries and musicals from Broadway and beyond at an affordable price.  Located just 20 minutes from Pittsfield, it is an easy drive from the Berkshires, Capital District and Springfield areas.  New this year are 2pm Thursday matinees on
select summer dates and Saturday 4pm matinees continue throughout the fall.  Tickets are $30 – $33 with a 6-show discounted season ticket for $165.  The theater is air-conditioned with accessible seating.

For a complete list of performance times and to order tickets, visit www.thetheaterbarn.org or call the box office at (518) 794-8989.  MasterCard, Visa, American Express, and Discover accepted.