REVIEW: “We The People” at The Theater Barn 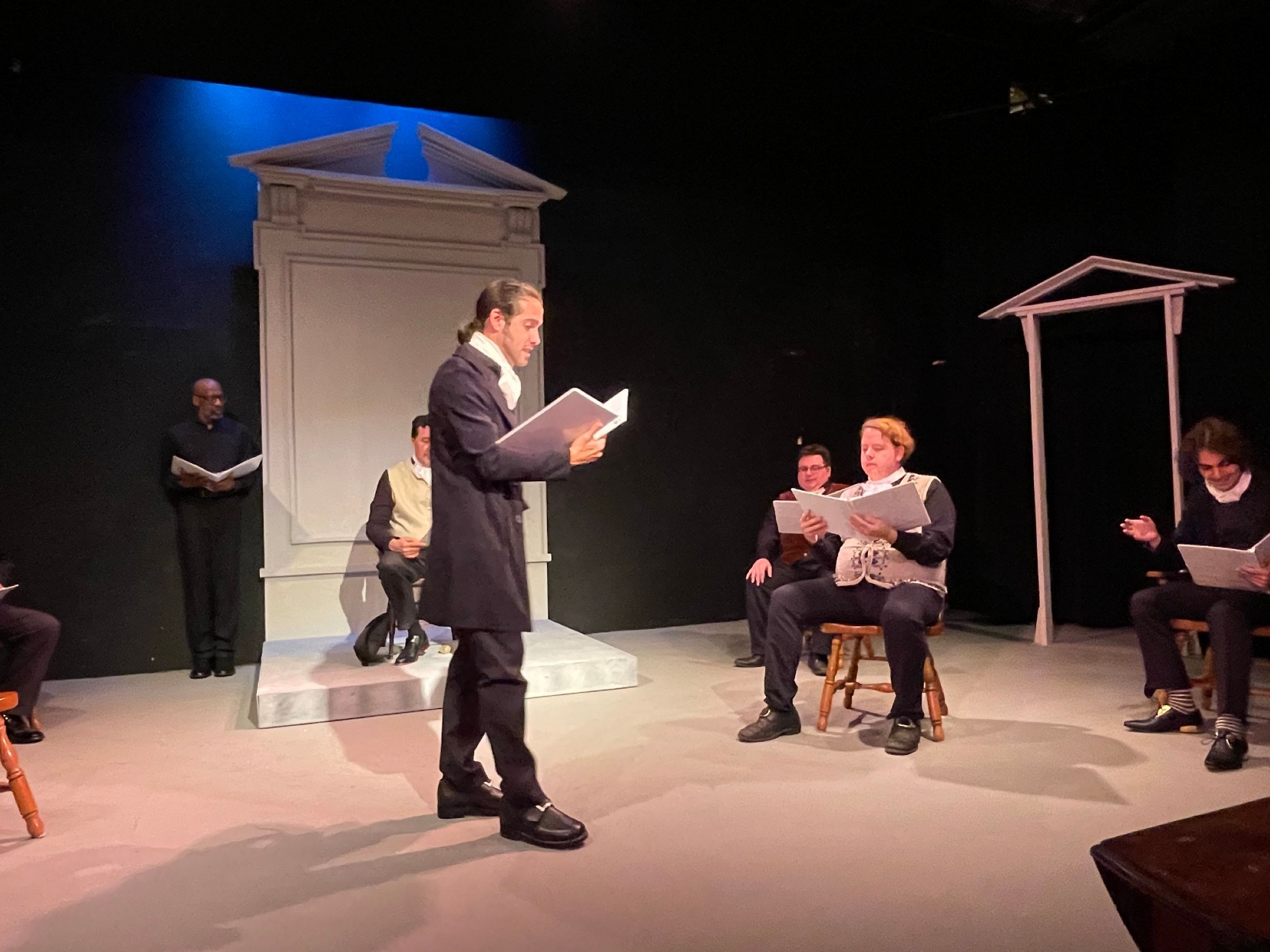 REVIEW: “We The People” at The Theater Barn

The Theater Barn is back!  How wonderful to return to the theatre after a two-year absence!  In the interim, Joan and Abe Phelps named their son Allen the new Producing Artistic Director of the ‘Barn they founded thirty-eight years ago.  In a departure from the theatre’s usual programming, its first offering is a staged reading of WE THE PEOPLE by Harrison Zeiberg, an original play about the 1787 Constitutional Convention in Philadelphia.

Zeiberg’s play was given a public reading online last December with professional actors, produced by The Actors Fund, which prompted Phelps to make it the first offering of his post-pandemic season.  A third-year politics and history major at Wheaton College, Zeiberg explains in a program note that his play “seeks to shed light on our Founding Fathers by depicting them as the flawed humans that they were, who one summer came together to create a nation out of words.” The playwright told the Times Union that their biggest mistake was to accept a compromise on slavery, which, along with the Electoral College, plagues us to this day.

In a visual representation of the plight of enslaved people, Zeiberg cleverly includes Billy Lee (Emmett Ferris), Washington’s slave, who silently observes the action as he stands upstage, until his moving, soft-spoken address to the audience at the end of the first act when we finally hear his thoughts and ideas.

One of the trickiest aspects of a staged reading is the balance the actors must maintain as they attempt to communicate truthfully with one another while holding their places in the script.  Having directed many staged readings, I have developed an appreciation for the delicate art of performing them.  With the notable exception of John Segalla as Hamilton, most of the actors spent their time onstage looking at their scripts rather than one another, even when they had no lines and were just required to listen. Hamilton, who avoided speaking his mind because his delegation had left the convention, nevertheless was brought to vibrant life by Segalla, who reacted to everything going on around him.

Phil Rice, playing Benjamin Franklin towards the end of his life, knows how to deliver a comic line as he seeks to achieve unanimity after many months of arguing during this long, hot summer.  Charles Cotesworth Pinckney of South Carolina (Ryan Palmer), vociferously defends slavery as an economic necessity, as he threatens Gouverneur Morris (Samuel Zeiberg, brother of the playwright) with the loss of the South if the delegates attempt to abolish this institution.  Director Sky Vogel finally encourages the actors to interrupt and verbally attack each other as they rush to take sides.  Roger Sherman (John Trainor) expresses the frustration felt by many in Congress today as he is forced to admit there will be no agreement possible on this issue.

Too often Zeiberg takes a long view as many of his characters question how history will regard their decisions, rather than living in the moment.  That takes us out of the world of the play, as does the use of clichés and anachronisms (“gridlock”).  His theatrical attempt to investigate how the Constitution was written is admirable but suffers from a lack of dramatic tension.

Costume designer Kara Demler and set designer Sam Slack coordinate a black and white color scheme, with a white platform for General Washington (William Squire) as he leads the proceedings, white entrances and exits against a black backdrop and curtains, white binders containing the scripts, and period black and white costumes (with the exception of some colorful vests).  Light and sound designer Joseph Sicotte, who plays James Madison, has chosen to repeat the same fife and drum tune after each scene that we hear in colonial re-enactments.

Although the decision by Allen Phelps to offer a historical staged reading is a step in a new direction for the company, the rest of the five play season will remain true to its traditional fare:  comedies, mysteries and musicals, long enjoyed by fans of The Theater Barn.

WE THE PEOPLE runs from June 3—June 6 at The Theater Barn, Thursday through Saturday at 8pm, Saturday June 5 at 4pm and Sunday June 6 at 2pm.  For tickets call 518-794-8989.  Proof of vaccination is required, except for Saturday evening.