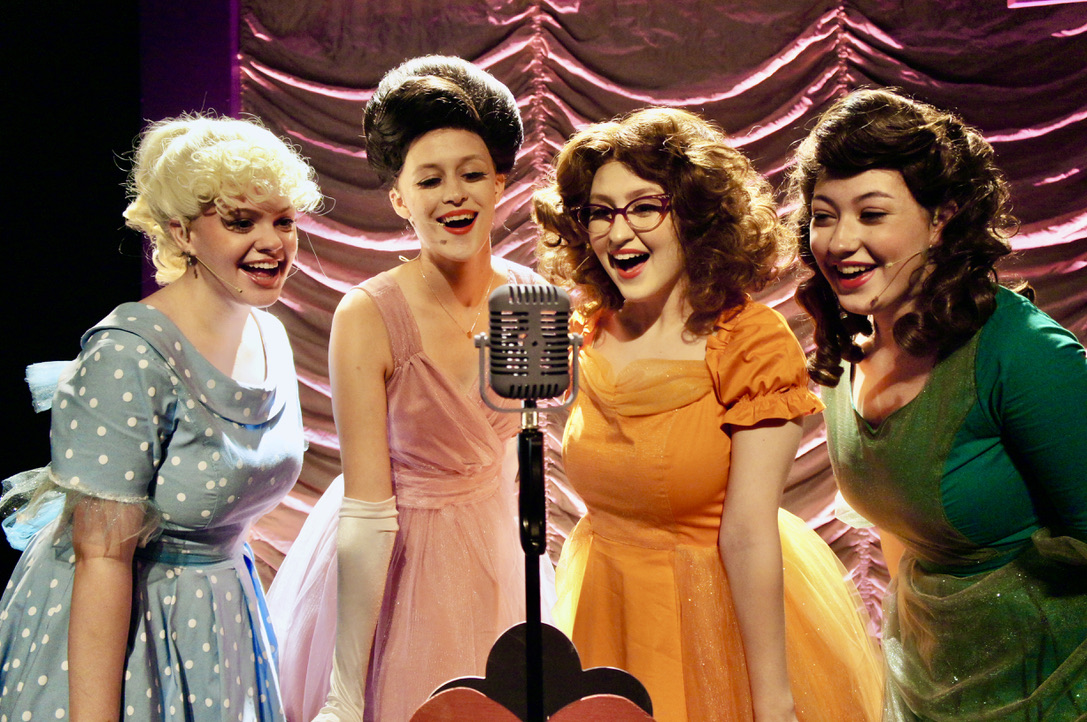 THE MARVELS OF THEATRE

“Marvelous!” is an appropriate word for the feeling of returning to live theatre and it is particularly apt for the debut production of Kyle West, the new Artistic Director at the Fort Salem Theater in Salem, New York. On June 18, the theatre opened THE MARVELOUS WONDERETTES, an entertaining and lighthearted revue of songs from the 1950s and 1960s. Now playing to sold-out houses, it is an auspicious return for theatre after the grim days of Covid-19 and promises a bright future for the new owners of theatre. The old church space has been an operating theatre since the 1970’s and offers a cabaret space and comfortable proscenium theatre of about 200 seats. It was renovated in 2006 and with THE MARVELOUS WONDERETTES has re-opened under new management.

This off-Broadway hit uses over 30 songs to tell the story of a quartet of high school girls who get to sing at their 1958 prom, regaling us with those songs you can’t forget. You can expect more than a few earworms on the way home from “Mr. Sandman” to “Lollipop” to “You Don’t Own Me,” “RESPECT,” and many more. Act One introduces us to Suzy, Cindy Lou, Betty Jean, and Missy – decked out in their outlandish period prom gowns and revealing their dreams of love and future happiness. In Act Two they return as guests for the prom 10 years later, resplendent in gorgeous sequined mini-dresses and gold go-go boots. The music has changed and so have the girls, as the songs reveal their very different stories.

Director West has assembled an absolutely amazing cast with Heather Hayes (Betty Jean), Iris Rogers (Cindy Lou), Jenna Wilkinson (Missy), and Kallie Ann Tarkleson (Suzy). Their voices soar in both solos and terrific four-part harmony. Each one has her moment to shine. This is most apparent in Act Two when each character gets a medley or set of three songs to reveal the twists and turns of the last ten years.

THE MARVELOUS WONDERETTES was created by Roger Bean. It is highly enjoyable and entertaining, but the overall story (told both through the songs and with dialogue in between) is slight and it is difficult to believe the dialogue would be happening in front of the imaginary prom audience. The songs and dance are right on the mark, but the high school bickering is only there to get us to the next song. Even so, it should be given more attention by the performers. The dialogue is rushed, too high pitched and a lot of information is lost in the first act. Much of the physical action is very campy (and appropriately so), but the director and cast should have found more believable moments in between the silly, saccharine, and adorable songs of the ‘50s. This is less a problem in the second act where the energy of the 60’s songs gives the women a chance to be strong and outspoken and their narrative becomes more understandable.

Iris Rogers plays Cindy Lou and is the most believable of the characters in the group, especially in the dialogue segments. She is a joy to watch and her voice is amazing. She shines as a soloist both vocally and in executing the very busy “girl group” choreography. Like all of the four singers, she is equally effective in the four-part harmony of the songs – these ladies have a beautiful blend and work together so well. That is all the more impressive because they are performing without live musicians – either a cappella or to taped music.

Jenna Wilkinson, who makes her debut at Fort Salem as Missy, offers many of the “wow” moments of the show. Her soprano voice and full-tilt energy are perfect for the high school girl who falls in love with her teacher. From “Secret Love” to “Teacher’s Pet” to “It’s in His Kiss” and several other songs we share her story of unrequited love to “With This Ring.” [I have to note that the songs of ardent feeling of a student for a teacher felt a bit uncomfortable in this #MeToo era, but the performers made it as charming as possible.] Ms. Wilkinson’s character seems more genuine in her Act Two costume where the wig is not upstaging her and her character has matured. She is a wonderful talent worth watching.

Also making her debut at Fort Salem is Heather Hayes as Betty Jean. A terrific performer, she plays the betrayed girlfriend well in “Lipstick On Your Collar” and “It’s My Party.” She has the beauty, voice and passion for the character, but she could make her character more effective by slowing down her dialogue and using a more natural vocal pitch to add more sincerity to the part.

Kallie Ann Tarkleson plays Suzy – perhaps the most challenging of the four roles. Suzy’s arc is marrying her high school love and returning ten years later very pregnant. Whereas in Act Two the other girls seem freed from the tatty ‘50s toile and tutus, Suzy’s’ “condition” does not fare well in sequins and go-go boots. The actress is also hampered in both acts by huge blonde wigs that don’t fit the period or the player. It was hard to discern if the fault was in the script or the performer, but Suzy did not ring true for me. Ms. Tarkleson mugged and try too hard. But she can sing! She was effective in the back up group and her solos, especially in the first act closer, “Hold Me, Thrill Me, Kiss Me.”

Kyle West has taken on multiple challenges in this production and in his new role as Artistic Director at Fort Salem Theatre. He has done a remarkable job considering he also was director and co-choreographer (with Susi Thomas), and co-costume designer (with Marcia Wilcox). In his director’s role he has assembled an astoundingly talented cast in a remote town of less than 3,000 people. He kept the show moving at a breakneck pace (as noted above, it could have used some variation in that.) The choreography of the show brings back so many memories of that time, but it seemed excessive at times. The singers did a great job of the moves, but they often lacked the precision of the period style and detracted from the soloist. Fewer moves, carefully performed, would have been more effective.

The design elements of the show were mixed. John Norine, Jr. also wore several hats as Technical Director, Sound Designer, and Scenic Design (and Music Director). The set was very workable (a gold lame backdrop and small platform and four mics.) But the backdrop, even as it changed with lights, didn’t always set off the performers and the sign for the girl group was not readable or interesting. The sound (except for the almost imperceptible pre-show track) was very good. It is so hard to have the sound levels of a recorded track and performers voices well balanced, especially when they are on mics. But the sound was excellent.

Costumers West and Wilcox created some horrid fashions for the first act–made understandable when we learn the seamstresses were the high school home ec department. The Act Two mini-dresses were a perfect choice for time change and contrast with the earlier decade. The biggest challenge was in the period hairstyles (Logan Coley Broker designed the wigs.) Always a challenge for any size theatre, the best choices were the ‘50s updo for Cindy Lou and the ‘60s bob for Missy. In a show where the time frame is all, some of the other choices were not as good. And please, if a character wears glasses, remove the lenses so we can see her eyes.

Maggie Turoff designed the lighting which, for the most part, was effective. At times the backdrop drew more attention than the singers in front of it because of low levels. It would have been nice to use the spotlight throughout the show and not just for one number at the end.

All in all, THE MARVELOUS WONDERETTES presents a most promising start for the new creative team. They have set a high bar for themselves. It was a delightful re-entry to theatre, with an undeniable cast of talented performers. Well worth the scenic drive up to Salem. The remaining summer season at Fort Salem will include NEXT TO NORMAL (July 23 through August 1) and a staged reading of NIETZSCHE! THE MUSICAL (August 21).

THE MARVELOUS WONDERETTES runs Fridays through Sundays through June 27th. For tickets call (518) 854-9200. The theatre is following all Covid restrictions, including social distancing and requirements to wear a mask during the performance. The performers are distanced from the audience.