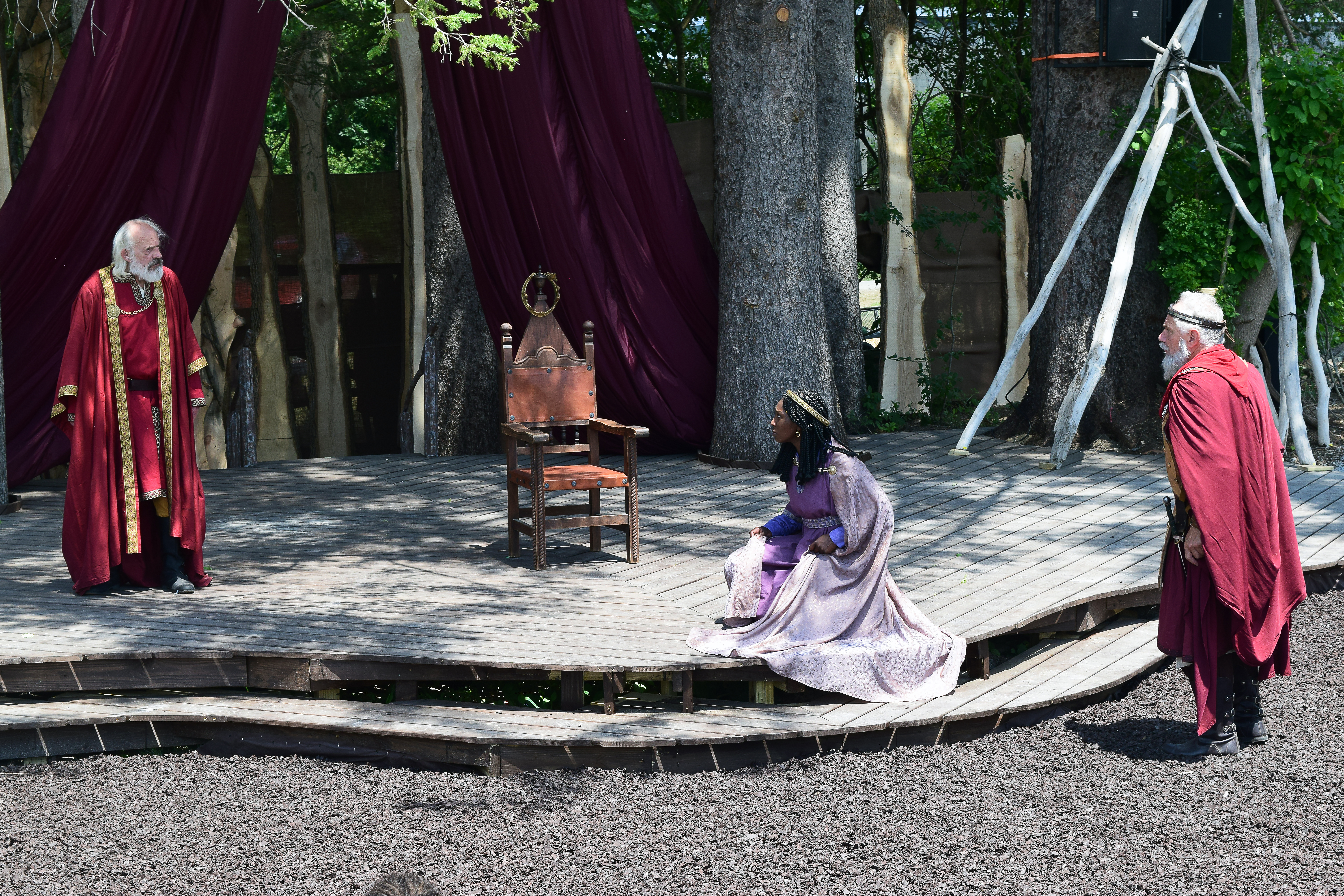 Audiences heading to The New Spruce Theater, where 40 foot spruce trees are the natural backdrop to the three-quarter round stage, to see Shakespeare and Company’s King Lear should be prepared for an evening outdoors. Frequent patrons of Tanglewood are familiar with the routine: bug spray, a well stocked picnic basket, and a pair of sunglasses to contend with the setting sun. On the other side of Lenox they’ll witness a king’s descent – deriving a similar pleasure to watching the current royals’ foibles in The Crown – but this downfall is more difficult to watch as Christopher Lloyd lays bare Lear’s vulnerabilities from the start and bares his fears and vanity like a sword as he loses both his mind and power.

The story begins with Lear dividing his kingdom among his three daughters and apportioning the lands according to their oaths of love and fealty. The eldest daughter Goneril is played with power and ease by MaConnia Chesser. The petulant and sharp Regan, played by Jennie M. Jadow, fights for recognition as the middle daughter and the effortlessly regal Jasmine Cheri Rush plays the youngest daughter Cordelia, who refuses the challenge. Her refusal sets in motion the action of the play. Lear tours his daughter’s homes with a retinue of a 100 knights, a former king free of the yoke of rule, and discovers the true nature of the family he created.

The comfort Lear receives from his Fool (Allyn Burrows) tells us much of what the he needs most to hear, and show us how well-attuned this fragile monarch is to coping with the arrows lobbed him.

The relationship between the monarch and his Fool (Allyn Burrows) tells us much of what this king needs most to hear. The comfort Lear derives from the Fool suggest a ruler well-attuned to the arrows lobbed against him.

Director Nicole Ricciardi chooses to allow the text to shine in this straightforward production. You won’t find apocalyptic settings or overt references to current politicians as she trusts the audience to see the parallels for themselves. The raging storm in this production rests more on metaphor than on might.

The design is simple, elegant, and in service to the text. Each element – sound design by Amy Altadonna, costume design by Govane Lohbauer, and set design by Jim Youngman – had a moment to shine. The birdsong, provided gratis by a slew of starlings, added a natural underscore throughout the evening.

One of the great pleasures of the evening is the work of Bryce Michael Wood in the role of Edmund. His castmates provide him with much to play off of, but he truly shines as he draws the audience into each soliloquy making accomplices of us all. He manages the role of the villain with relish and risk.

There is a joy in the simplicity of this production. Creating a new outdoor theatre is no small feat and audiences will have much to look forward to as the company continues to explore and stretch the limits of the space.