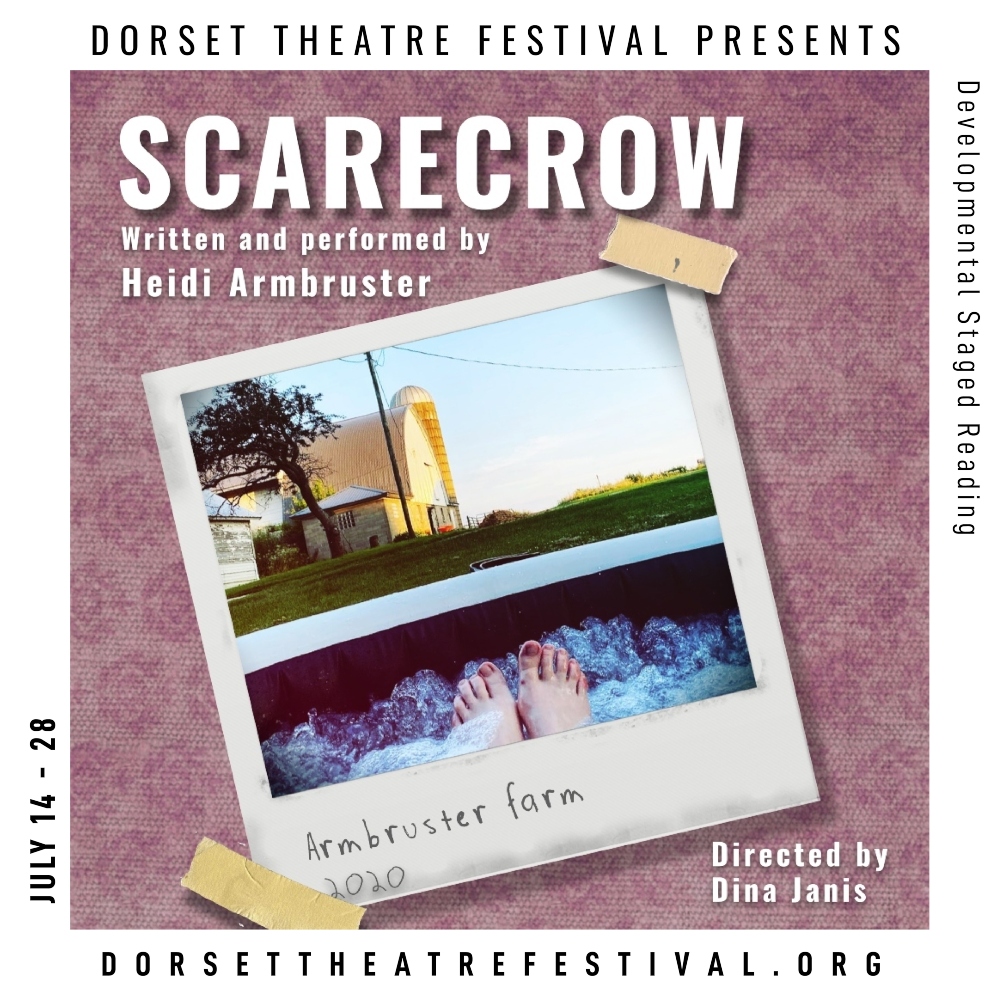 Actress, playwright, and co-founder of Dorset’s Women Artists Writing Group, Heidi Armbruster, will spend three weeks in Vermont developing a new one-woman show directed by Dina Janis that will be presented as a staged reading in a limited series of matinee performances at the Festival’s new outdoor stage at Southern Vermont Arts Center.

“It is an incredible gift to be able to workshop this deeply personal piece with Dina and Dorset Theatre Festival.

The heart of the piece is really about a relationship with the farm landscape that my father devoted his life to, and to be able to be outdoors for performances adds another layer to this work,” said Armbruster.

SCARECROW tells the story of a New York City actress who lands herself on her family’s dairy farm to grieve herself back to life after the death of her father, a farmer. But can she ever make enough meatloaf, or watch enough Hallmark movies, to feel a sense of purpose again now that her most important person is no longer on the planet? A laugh-out-loud journey through loss, survival, resilience, and renewal, Scarecrow is both a comedy and a look at farm life in America through the eyes of a farmer’s daughter.

“Heidi is one of our most talented writers, and this piece will give our audiences a chance to see what a gifted actress she is. The play is truly hilarious and at the same time, a deeply touching story that illuminates the lives of one family of farmers in Wisconsin, a place very much like Vermont in so many ways,” said Dina Janis, director, and Dorset’s artistic director.

This piece was originally developed in the Festival’s Women Artists Writing Group, a member-driven group that facilitates the creation of written work across a variety of media with a strong focus on playwriting, aiming to develop and amplify the writing voices of mid-career women and non-binary theater artists.

Dorset Theatre Festival builds upon its growing reputation as an incubator for up-and-coming American plays with the Pipeline Series—a cutting edge series of new works destined to become tomorrow’s classics.

The Pipeline Series provides writers with fully supported workshops culminating in public staged readings. This interactive program invites our audience to become vital participants in the development of new work and provides a first look at new plays in consideration for future productions at the Festival and beyond. This year the Festival is turning the annual series of one-night-only readings into an artist residency.

Dorset Theatre Festival’s outdoor Main Stage season began performances on July 10 with the hilarious blast-from-the-1980s comedy Laughing Wild by Christopher Durang, whom The New Yorker called “one of the funniest men in the world.” The world premiere of Queen of the Night, an honest and poetic comedy about family by travis tate, opens August 10. Tickets for the outdoor season are on sale now at dorsettheatrefestival.org.

The outdoor main stage season is sponsored by Church Street Hospitality, and support for Dorset Theatre Festival’s 44th season is provided by the Rodgers Family Foundation, the Shubert Foundation, the Harold and Mimi Steinberg Charitable Trust, the National Endowment for the Arts, the Vermont Arts Council, and members of the Dorset Theatre Festival World Premiere Circle.

Heidi Armbruster,  is a New York City-based theatre artist dedicated to creating new work and discovering new approaches to classical literature and theatre. Heidi is a founding member and co-curator of Dorset Theatre Festival’s Women Artists Writing, a group dedicated to cultivating the emergence of diverse theatrical voices. Heidi’s play MRS. CHRISTIE received its world premiere at Dorset Theatre Festival in the summer of 2019. Her other plays, including DAIRYLAND, MURDER GIRL, Every Good Girl Deserves Fun (and other misremembered things), Where the I Divides, and Purgatory, have been produced and developed at prestigious theatres across the country including SPACE on Ryder Farm, Primary Stages, Kansas City Rep, Red Bull Theater’s Short Play Festival, and many others.  As an actress, Heidi has extensive New York and regional theatre credits, including TIME STANDS STILL on Broadway and Lincoln Center’s production of the Pulitzer Prize-winning play DISGRACED.  Heidi was awarded a Drama League Nomination for her work in the Keen Company’s revival of Tea and Sympathy and has many TV and film credits including The Blacklist, Blue Bloods, 30 Rock, SVU, House of Cards and her role as Michelle on Darren Star’s TV Land hit Younger.

The director of Scarecrow, Dina Janis, has served as the artistic director of the Dorset Theatre Festival for the past twelve years, where she recently was co-creator and director of Gorgeous Nothings, with Mary Bacon and Purva Bedi. Dina oversees Dorset’s New Play Development Programs including the Festival’s Women Artists Writing Group, Pipeline Series of New Plays, Stage Free Audio Play Series, and the new Commissioning and Fellowship Program. Dina’s main stage productions at Dorset include the acclaimed production of Lady Day at Emerson’s Bar and Grill by Lanie Robertson, The Whipping Man by Mathew Lopez and Out of the City by Leslie Ayvazian. As part of the Pipeline Series Dina has directed A Stage of Twilight by Sarah T. Schwab starring Karen Allen and A Life in the Theatre by David Mamet starring Treat Williams. She has served on the Drama Faculty of Bennington College for the past 21 years.