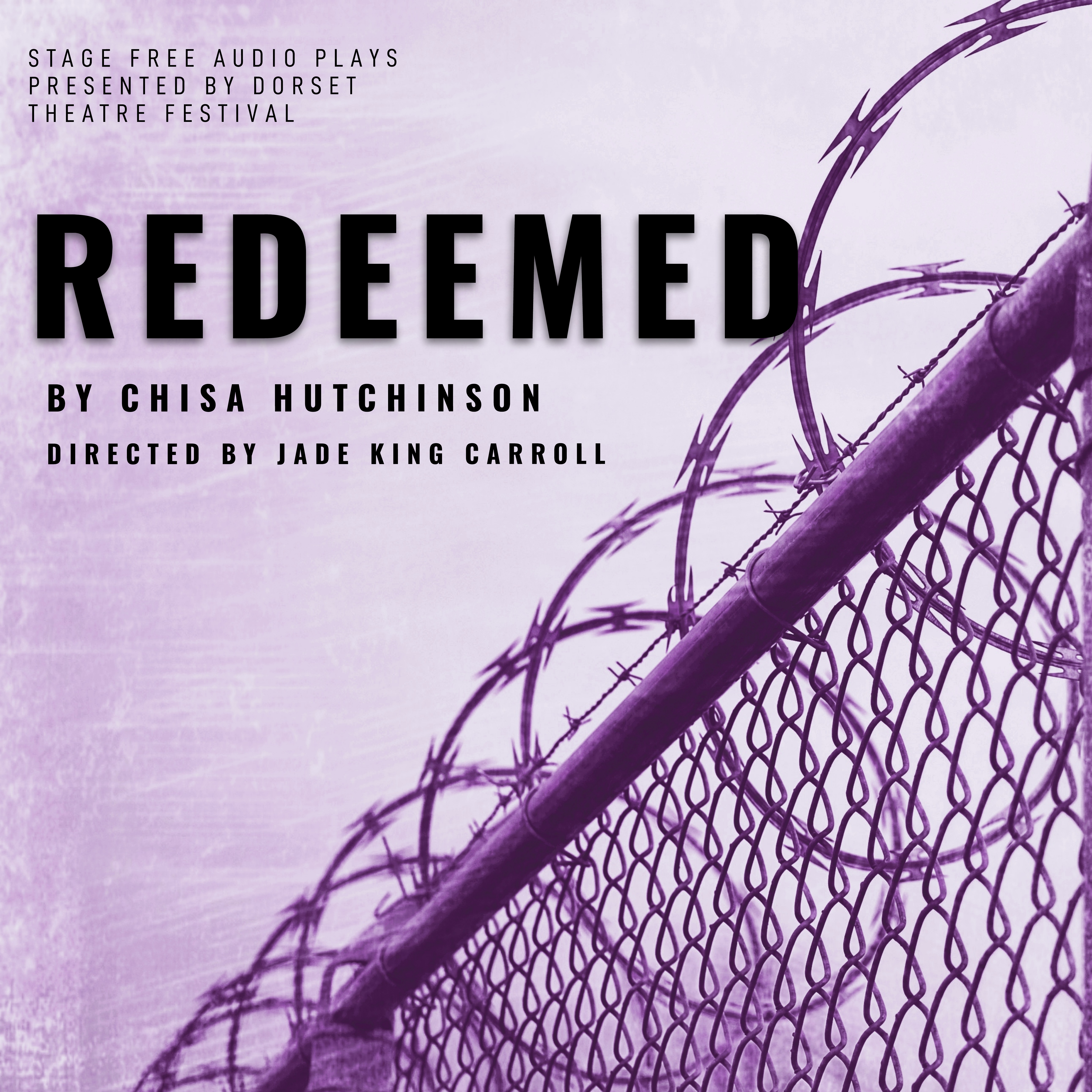 Dorset commissioned award-winning writers Theresa Rebeck and Chisa Hutchinson as the inaugural playwrights of the series, with Hutchinson’s Redeemed premiering first. “We are so excited to launch this free and accessible series with this terrific new play by one of the country’s top playwrights, Chisa Hutchinson, and we are thrilled to be doing so with our new partners at the Contemporary American Theater Festival in West Virginia,” said Dina Janis, Dorset’s artistic director. “In these times, it felt more important than ever to find ways of collaborating with and supporting artists while demonstrating our commitment to producing theatre that is accessible and available to all,” said Janis.

REDEEMED, which will launch Dorset’s Stage Free Audio Plays Series, is available this week on podcast platforms. The play tells the fictional story of convicted murderer Trevor Barlow, who killed Claire Yiang’s brother nine years prior and has written to Claire begging her to visit him in prison. When Claire arrives, the killer claims he’s a changed man thanks to the help of her brother’s ghost. Now Claire must decide whether her brother’s murderer is capable of redemption, or just attempting to impress the parole board. A riveting exploration of domestic terrorism, Redeemed is a chilling and surprising audio drama.

“It’s a kind of morally muddy play. My hope is that folks will feel compelled, inspired, and challenged by the humanity of the characters, who each take their turn showing us the most unsavory bits,” said the playwright, Chisa Hutchinson.

The second audio play of the series, Theresa Rebeck’s Nightwatch, a fictional true-crime podcast, will debut later in 2021. Dorset’s StageFree Audio Plays are funded in part by the Venturous Theater Fund of the Tides Foundation. Support for Dorset Theatre Festival’s 44th season is provided by the Rodgers Family Foundation, the Harold and Mimi Steinberg Charitable Trust, the National Endowment for the Arts, and members of the Dorset Theatre Festival World Premiere Circle. For more information, visit dorsettheatrefestival.org.

Chisa Hutchinson is a New Jersey based playwright and screenwriter. Her radio drama, Proof of Love, was recently presented by Audible and New York Theatre Workshop at the Minetta Lane Theater in NYC and can now be found on Audible’s digital platform. Chisa has happily presented her other plays, which include Dirt Rich, She Like Girls, This Is Not The Play, Sex on Sunday, Tunde’s Trumpet, The Subject, Somebody’s Daughter, Alorndra Was Here, Surely Goodness and Mercy, From the Author of Whitelisted, and Dead and Breathing at such venues as the Lark Theater, SummerStage, Atlantic Theater Company, Rattlestick Theater, the Contemporary American Theater Festival, the National Black Theatre, Delaware REP, Second Stage Theater and Arch 468 in London. She has been a Humanitas Fellow, a Dramatists Guild Fellow, a Lark Fellow, Resident at Second Stage Theater and New Dramatists, a New York NeoFuturist, and a staff writer for the Blue Man Group. Her first original feature, The Subject, an independent film about a white documentarian dealing with the moral fallout from exploiting the death of a black teen, has been selected for numerous festivals, including the Art of Brooklyn Film Festival, The Lighthouse International Film Festival, the Bronze Lens Film Festival, The DC Black Film Festival and the Catalina Film Festival where it won the top prizes.

Actor Michael Esper will co-star with Vanessa Kai playing the role of Trevor Barlow.  Michael’s film credits include the soon to be released, Runner, Runner for director Brad Furman, starring Ben Affleck and Justin Timberlake. Notable television credits include Nurse Jackie(Showtime),  Do No Harm( NBC) The Good Wife (CBS), and Law & Order( NBC). Michael originated the role of Will in the Tony Winning musical, American Idiot and made his Broadway debut opposite Frank Langella in Roundabout Theatre Company’s  A Man for All Seasons. Other recent Broadway credits include the role of Curtis in the Tony Nominated production of Nicky Silver’s The Lyons. Off Broadway theatre credits include: Assistance(Playwrights Horizons) The Agony and The Agony(Vineyard Theatre), As You Like It (The Public Theater); Big Bill (Lincoln Center Theater); Crazy Mary, Manic Flight Reaction; The Four of Us (Manhattan Theatre Club); subUrbia (Second Stage Theatre); and Tony Kushner’s The Intelligent Homosexual’s Guide to Capitalism and Socialism with a Key To the Scriptures (Public Theatre) Michael Esper is a recipient of the Clarence Derwent Award from Actors’ Equity. He also received a nomination for Best Supporting Actor for Long Day’s Journey Into Night from the Irish Times.

Composer Justin ellington has worked with Lincoln Center Theater, The Guthrie, Oregon Shakespeare Festival, Stratford Shakespeare Festival, The Goodman Theater, The Kennedy Center, Theater For A New Audience, New York Theater Workshop, The Public Theater, Williamstown Theater, New York Stage and Film, Actors Theater of Louisville, Children’s Theater Company, Royal Shakespeare Company, Center Theater Group, Geffen Playhouse, The Alliance Theatre, and others. Ellington has been the recipient of a Grammy award, an American Society of Composers and Publishers (ASCAP) award for his work in the recording industry.  He earned a Grammy for his work with Usher (Raymond vs. Raymond) and an ASCAP award for his work with Nicki Minaj (Pink Friday). In 2014, Mr. Ellington was commissioned to compose music for the National Museum for Civil and Human Rights. The project titled MOVE ACT FREE, led by George C Wolfe, was awarded a Cinema In Industry (CINDY) Award for production design.

Helming Sound Design on the production is Twi McCallum. Twi’s theatrical credits include sound design at Kansas City Rep, The Kennedy Center, The Public Theater, Baltimore Center Stage and her Broadway debut Chicken & Biscuits (Queens Theatre). Most recently, she was Sound Designer for Rattlestick Theatre’s MTA Radio Plays. Twi has served as an apprentice sound editor on television shows for STARZ and NBCUniversal, and will be sound designer/composer/mixer for an upcoming Marvel digital series. Most importantly, she is a former student of Howard University’s theatre department and a graduate of Yale School of Drama’s one-year sound program.