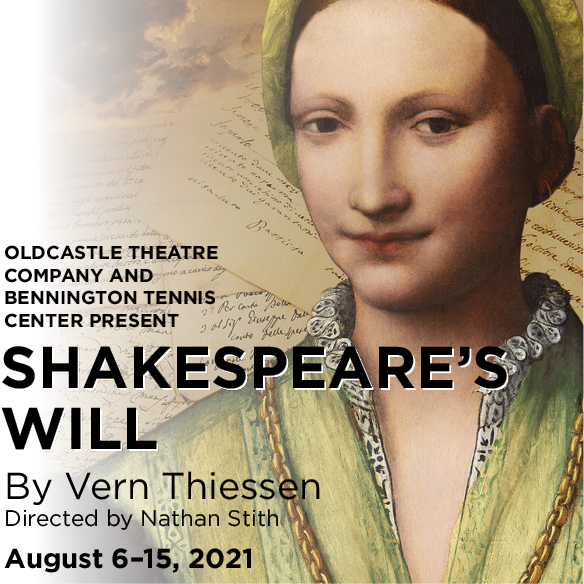 After a very successful opening production, Oldcastle Theatre Company’s 49th season continues with SHAKESPEARE’S WILL, running August 6–15. “We are so grateful to all of the people who came out to see VISITING MR. GREEN,” says Artistic Director, Nathan Stith. “You could really feel the excitement about returning to live theatre. We can’t wait to share this next show with everyone.

SHAKESPEARE’S WILL, by Canadian playwright Vern Thiessen is a one-woman show about the wife of William Shakespeare, Anne Hathaway. “This is a figure about whom little is known,” says Stith, who is also directing the production. “The play sheds light on who she might have been and the struggles she had raising a family with a mostly absent husband.” Ultimately, says Stith, the play is about one woman’s love for her husband and children. At times funny, at times incredibly moving, Thiessen has written a poetic and beautiful piece that audiences will find both engaging and surprisingly relevant.

Playing Anne is Oldcastle favorite, Katrina Ferguson. Katrina has been seen on the Oldcastle stage in A MOON FOR THE MISBEGOTTEN, JUDEVINE, ENGAGING SHAW, and THE RIDE DOWN MT. MORGAN, among others. She has also appeared off-Broadway, and in regional theatres including Dorset Theatre Festival, Ivoryton Playhouse, and New Jersey Rep, among others.

Immediately following the 2 pm show on August 7 and 8, author Gerit Quealy, “Botanical Shakespeare,’ will be presenting a talk on Shakespeare’s references to botanicals in his plays.

The production runs August 6–15 at Bennington Performing Arts Center—The Home of Oldcastle Theatre Company, 331 Main Street in Bennington, VT. Tickets are $25. Performances are Wednesday–Saturday at 7:30 pm and Saturday–Sunday at 2 pm, with a Pay What You Will night on Wednesday, August 11. Face masks are encouraged but not required for this production. Get tickets online at oldcastletheatre.org/tickets, by phone at 802-447-0564, or in person 90 minutes prior to each performance.