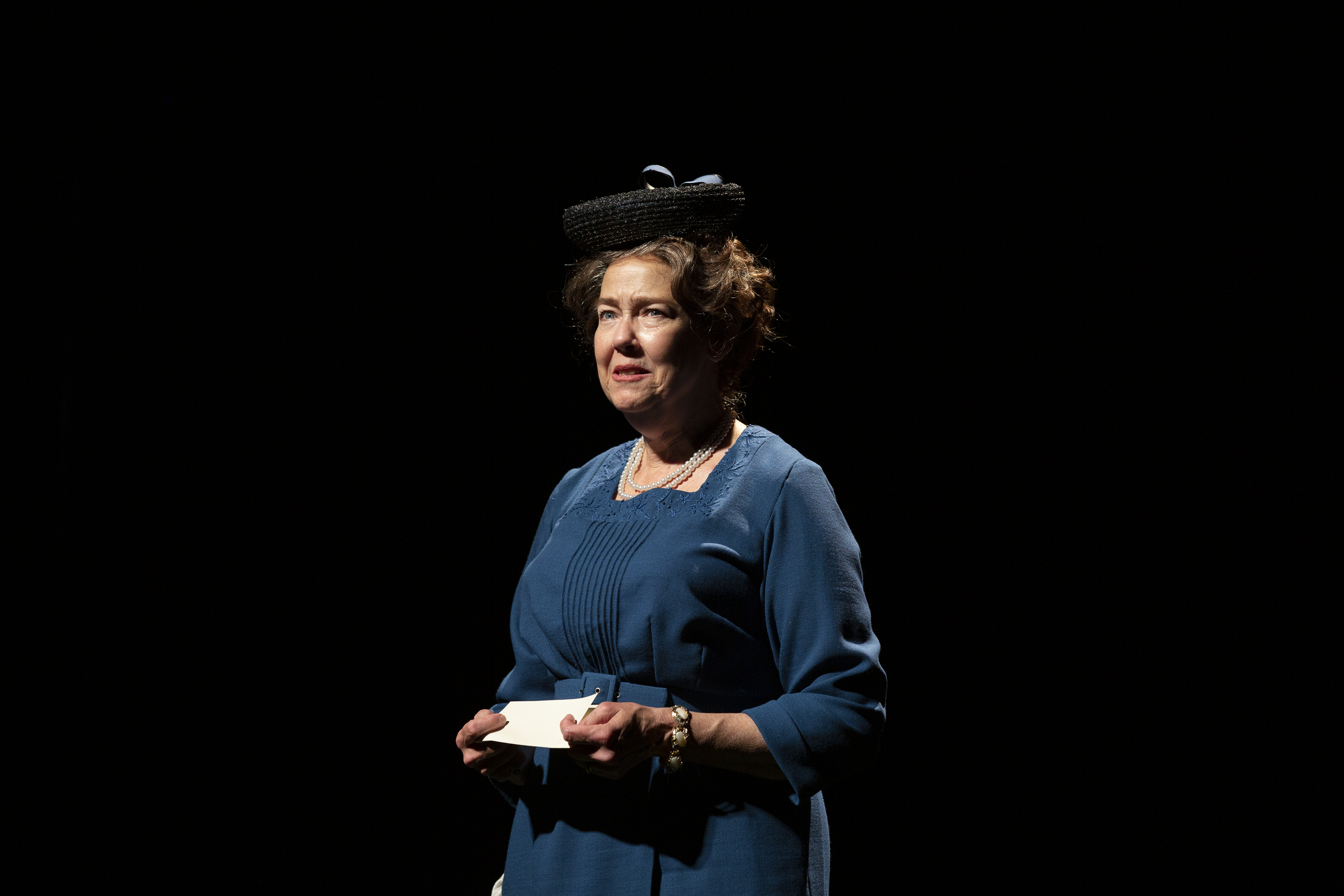 Eleanor Roosevelt is one of America’s most important figures whether male or female.  Playwright Mark St. Germain salutes this ingenious and brave woman in his play Eleanor currently at Barrington Stage Company’s Boyd-Quinson main stage theatre in Pittsfield.  If one is familiar with her life there is very little new that is revealed about Mrs. Roosevelt.  The strength of the play is its single actress, Harriet Harris.

She brings the first lady to life from childhood to death by describing and dramatizing the major events in her and Franklin’s lives and the myriad personalities that played a role in her life.   Through the ninety-minute monologue Ms. Harris controls the stage.  She recreates Eleanor’s physical carriage and her vocal expression has the same timbre .  She also uses her voice to resurrect important personages from FDR, his friend and advisor Louis Howe, her father, her overbearing mother-in-law, her uncle Teddy and Winston Churchill among many others.  She finds the humor and plays the poignant scenes, of which their are several, beautifully.  A minor problem is when Ms. Harris is shrill some of her articulation is garbled.

The script by Mr. St. Germain, who has had many plays produced by Barrington and whose second stage bears his name, is a bit contrived.  The play is set in Washington D.C.’s Rock Creek Cemetery.  She tells us “This was my favorite spot, especially in Spring. I came here all the time to sit and think, and I still do.”  One would like to think she would be speaking to us from the family homestead in Hyde Park, New York, though there is a backdrop depicting Rock Creek’s statue “Grief” which is a major element of her life story.

She also informs us that “My body lies beside Franklin’s, but not my spirit.” It would be less artificial if she could be speaking to us from the last years of her life.  The script has a plethora of “Then I did this” and “Then this happened” as she recapitulates the important moments in her life which allows  that structure.

Director Henry Stram moves the production smoothly fom conflict to conflict which allows Ms. Harris to imbue the moments of drama with insight and energy.  The set by Brian Prather is simply a park bench on a platform with the backdrop of the cemetery and statue as the only other scenic component putting Eleanor at center stage without any distractions.  Philip S. Rosenberg’s lighting occasionally brings a different  atmosphere to the backdrop and effectively changes the aura by using shadows to enhance the many flashbacks.

The costumes by Alejo Vietti are simple with just a coat and a stole that define various moments or places in Eleanor’s story.  Eddy Mineishi’s sound is subtle and unobtrusive as it supports the tone of various scenes.

Eleanor plays on Barrington Stage Company’s Boyd-Quinson Stage, on Union Street in Pittsfield, MA. For information and tickets go to their website www.barringtonstageco.org or call 413-236-8888.

As Harriet Harris was preparing to enter this realm, Thespis* kissed her gently on her forehead, thus anointing her with a singular gift for shapeshifting. I cannot find a better explanation for her consummate gift for fully becoming someone other than herself, for acting.

For 90 minutes on the Boyd-Quinson Stage at the Barrington Stage Company, I watched Eleanor Roosevelt sit on a bench at Washington, DC’s Rock Creek Cemetery, at times reliving events of her remarkable life, at other times returning to the present to enlighten us with unwavering hindsight.

Mrs. Roosevelt is able to provide hindsight because she is no longer among the living. Initially, I must admit, I was disappointed by the familiar conceit of a deceased person coming to life, but Harris’s performance was so luminous that I submitted to it quite willingly. I’m a fan of playwright Mark St. Germain, who has a gift for reimagining history (among his many works are Typhoid Mary, The Best of Enemies, and Freud’s Last Session), and the language he created for Eleanor was heartbreaking, fascinating, elegant, yet straightforward. Through Harris, he presents her life with exquisite empathy, so that the familiar conceit becomes far less important than the subject.

Henry Stram’s expert direction, along with Philip S. Rosenberg’s lighting design and Eddy Mineishi’s sound design, propels the action and enables us to glide between events of her past and her present-day commentary. Scenic designer Brian Prather places us squarely facing that cemetery bench with a backdrop that also shifts effortlessly between past and present, between the White House and the United Nations and through the many locations Mrs. Roosevelt visited in her travels.

Alejo Vietti’s costume pieces are utterly authentic, as is Mary Schilling-Martin’s wig design. In real life, the lovely Harriet Harris certainly bears little if any resemblance to Eleanor Roosevelt, a self-described “Ugly Duckling,” but the combination of her stellar performance and the designers’ fine craftsmanship succeed in creating a woman who is undoubtedly Mrs. Roosevelt.

Most of us have heard recordings of Mrs. Roosevelt’s distinctive quavering, octave-changing speaking voice. Harris has wisely chosen a more pleasing yet unmistakably blue-blooded American accent. (When we learn of her advisor’s insistence that she tame the cadences of her voice, we hear something closer to what the real Mrs. Roosevelt sounded like, but that is all that is necessary to illustrate the point.)

Harris transmits a profound level of feeling as she relives scenes from her unorthodox marriage to President Franklin Roosevelt, and she movingly recalls the loves of her life as well as her passionate commitment to human rights. Really, Harris has us in the palm of her hand, and what a fine guide she is.

*Thespis was an ancient Greek who, according to Aristotle, was the first actor to ever appear onstage.

Eleanor plays on Barrington Stage Company’s Boyd-Quinson Stage, on Union Street in Pittsfield, MA. For information and tickets go to their website www.barringtonstageco.org or call 413-236-8888.