REVIEWS: “The Niceties” at the Chester Theatre Company 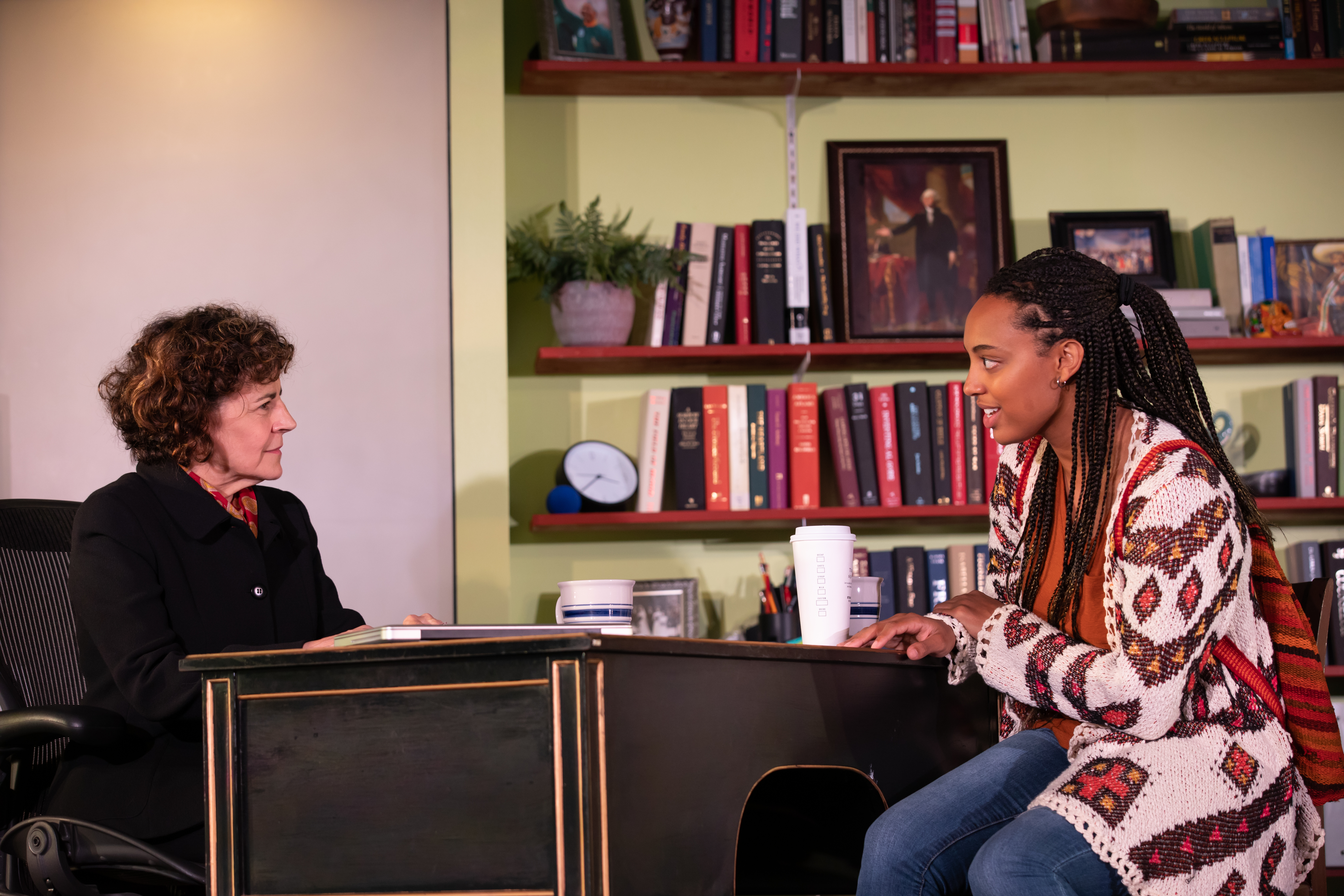 REVIEWS: “The Niceties” at the Chester Theatre Company

The Niceties by Eleanor Burgess is a play for our time that has been brewing for six centuries.  The production by Chester Theatre Company at Hancock Shaker Village in Pittsfield is dynamic, unsettling, beautifully acted and directed.

It starts as a student conference between college history professor Janine Bosko (Andrea Gallo) and a young Black woman, Zoe Reed (Stephanie Everett) concerning a paper Zoe has written for an American history class.  After an initial grammar lesson the congenial conversation strays several times and then comes back to the paper.  Janine makes several comments and then announces that it needs a lengthy revision.  When Zoe asks why Janine turns to the beginning of the paper and reads, ”A successful American Revolution was only possible because of the existence of slavery.”  Zoe affirms her belief in the truth of the statement while Janine counters saying that the paper needs documented proof not just an opinion.  This triggers a discussion which intensifies into a series of challenges and personal denunciations. Both women are intense and defend their respective positions with intellect and emotion. Little by little their attitudes become more intransigent.  Argument after argument is countered by each citing historical incidents and personal experience.

Zoe has secretly been recording the discussion and releases it for public knowledge.

Three weeks later, after their respective lives have been considerably altered, they meet again seemingly willing to recognize their different positions.  They agree to work together to change the structure of the university to reflect the population of America. But this, too, deteriorates into a fierce conflict.

Yet, as playwright Burgess says, “When it comes to the facts of history, almost everything that both of the women in this play say is right.”

Director Christina Franklin drives the production with energy.  Her staging is fluid and the actresses’ gestures and line delivery are befitting their characters.  The many arguments are introduced seamlessly as their intensity grows.  Franklin’s work is buttressed by the high-powered cast.

Gallo and Everett make Janine and Zoe real people by honestly listening and responding.  Every movement says something –  their hands,  their eyes – we always know what they’re thinking and to what they are reacting.  They imbue the play with credibility and, more important, the truth.   Their acting is the highest form of theatrical art.

Juliana von Haubrich’s set is the typical faculty member’s office with books and uncomfortable furniture.  It even looks as if it smells like an academic’s office.  The costumes designed by Charles Schoonmaker complement the characters’ personalities.  Zoe is in Millennial chic while Janine is in academic attire.  Everything in the play serves to enhance their antagonism.

The conflicts in The Niceties are not easy to accept but it is a dynamic and telling piece of theatre that should not be missed.

However, the play runs through this Sunday, July 25, with only a few tickets available.  For information and tickets go to Chester@Hancock.  Fast!

Recently, a friend expressed his concern about our country and its desperate need for guidance—especially from the arts—as to how to begin to heal.  Eleanor Burgess’ play, The Niceties, produced by Chester Theatre Company at Hancock Shaker Village, offers a response. Though it does not provide any solutions, it presents us with two characters:  a middle-aged female history professor at an elite university and her young black female student, as they grapple with race, class, and generational issues.  Kimberly Senior, director of the 2018 production at Boston’s Huntington Avenue Theatre, aptly described these women as combatants in a “gladiatorial arena where the upper hand changes [from] moment to moment.”

In the interview with Senior, Burgess expressed the hope that her play would engender questions such as:  “What is the story of America? What has happened in this country? What is the country supposed to be? What has it never been?”  Senior addded:  “Who should be teaching what to whom?”

In the Chester production Janine, the professor (Andrea Gallo), meets with her student, Zoe (Stephanie Everett) in her office to discuss the paper Zoe has just submitted.  In addition to correcting minor grammatical errors, Janine objects to the fundamental thesis of the paper:  “A successful American Revolution was only possible because of the existence of slavery.” Once Janine insists that no scholars would agree with Zoe’s thesis, the ever-increasing conflict begins.  Demanding first-person historical evidence, Janine dismisses Zoe’s complaint that enslaved people were not free to write about their beliefs, as the founding fathers were, admitting:  “That’s the way things are.  I can’t fix that.”  Without proper sources, Zoe’s paper will not be given a good grade, which will destroy her chances to make Phi Beta Kappa or to apply for her dream job:  The Carson Fellowship for Social Justice.

Burgess goes to great lengths to make it a fair debate, claiming in the Notes to the play that based on the facts of history “almost everything that both women in this play say are right.”  But, as Kimberly Senior insisted, they are also both wrong.  Is it fair for a white professor to have the power to ruin the chances of a bright black student’s opportunity to succeed because the historical evidence she demands is non-existent or rare at best? Is it right for that same student to insist on a good grade despite the fact that she cannot afford to spend any more time on this paper because she is deeply involved in setting up protests for social justice?  Burgess’s play helps us to understand the consequences of the current battle over banning Critical Race Theory in classrooms, by showing us what happens if we let the anger and pain of centuries of racism destroy us all.

Despite the depth of their anguish, Christina Franklin, director of Chester Theatre’s production, points out in an interview with Jeffrey Borak for The Berkshire Eagle, that “It’s very rare these days to see critical debate with people who are trying to find agreement, common ground.  I’m interested in our audiences seeing in The Niceties critical debate rooted in love.”  To that end, the gifted set designer, Juliana von Haubrich, creates two different environments on the small but high stage at Hancock Shaker Village, within the professor’s office.  On stage right is the professor’s unusual silvery desk with her ergonomic chair facing the student, while on stage left two black leather easy chairs form a more intimate conversation group.  Though this play could easily be a static back-and-forth argument, Franklin moves the actors from one side of the stage to the other, motivated by the tone of their conversation.  For example, after the act break (a brief pause rather than an intermission) the two women shared moments of emotional trauma after their earlier encounter was disseminated to the college community.  There is very little yelling in Franklin’s production, where tension escalates as the women talk over each other.  It often seems that Janine and Zoe don’t want to dislike each other but when their anger boils over, they each go too far.  As Associate Professor of American History and Consulting Scholar Elizabeth Stordeur Pryor explains in a program insert:  “Racism is so messy that often the responses to it are equally messy.”

The difficulty for the actors in this type of play is how to go beyond ideology and present fully-rounded characters, guided by Burgess’ instruction:  “Let them both be people.” Gallo is so enthusiastic about her teaching that her stories bubble-over with her love of the subject.  A feminist who had to fight for everything she has attained in her life, including her lesbian marriage, she wants her student to follow in her footsteps and rise to the top of her profession.  But Everett has her own ideas and interests, preferring to fight for the rights of people of color.  She can be respectful and loving, as a child to a parent, but she can also be cruel and rude, which caused some of the young people in the audience to gasp in reaction.  Both actresses have successfully mined the humanity of their characters, playing their roles moment to moment, never anticipating the next outburst and allowing us to witness their every reaction.

Costume designer Charles Schoonmaker’s outfits and hair styles perfectly suit the women’s personalities and ages, while Lara Dubin’s lighting and James McNamara’s sound design are essential in establishing the passage of time and events between the two acts.

If we are ever to come together as a nation, we need to listen to one another–not easy but it is what Burgess bravely attempts to do.