“The Women of Tyringham”: An Interview with Ann Gallo of UBU Theater 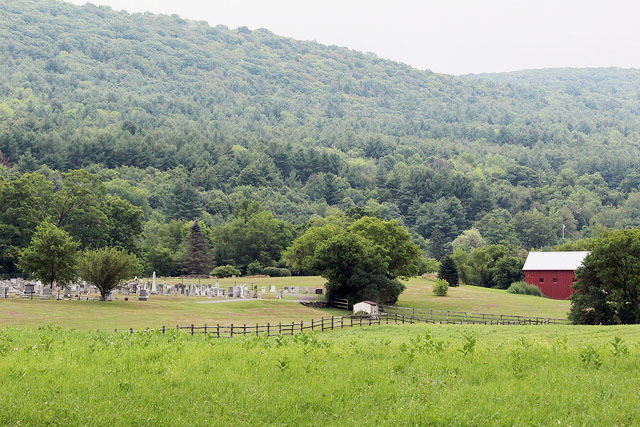 “The Women of Tyringham”: An Interview with Ann Gallo of UBU Theater

It was a pleasure to reconnect with Ann Gallo, of UBU Theater who first spoke with Berkshire on Stage back in 2017 about her community production of Thornton Wilder’s Our Town in Tyringham, MA, where she’s had a home for decades and lived full-time for the past six years. Post-pandemic she and many of her neighbors – Our Town participants and newcomers – felt the need to come together again. The result The Women of Tyringham will have a two weekend run July 24, 25 & 31 and August 1 at 11 am on the Tyringham Cemetery field.

“After having done Our Town, the community got very animated and started to come together,” Ann explained. “I promised that this time we would devise our own theatre. The Tyringham Historical Commission had 60 audio cassettes of interviews with women from the town which had been made between the 1970s and the first decade of this century, but they had only interviewed six women. So I thought this was an opportunity. I set parameters for what kind of women from Tyringham that I wanted to interview – were they born or raised here? Did they marry into town? Move here for work? Leave and then return? I ended up conducting 32 interviews.

My co-writer, Rachel Urquhart, and I went through all those interviews to find the special moments and stories. We made hundreds of piles in my living room on all different topics. Finally I said, ‘We have to just sit down and write a scene.” I used the techniques I’d learned in a workshop I took at the British Library called ‘Transcript to Script.’ This was a crash refresher course!

The script we’re performing is about Version 15.2 and Rachel is at my side during rehearsals because I am producing directing and co-writing, which is a bit much.. We have 34-40 people participating, they are local folks from all walks of life, not professional actors, three of them were in Our Town. It is so much fun to watch them do the work. Some of the ladies I interviewed are in the play but they never speak their own words, which was my decision as we crafted the production. A few of the ladies interviewed have died, but that makes it poignant because we’re doing this right next to the cemetery.

This is community-based theatre, not a Gilbert & Sullivan operetta in the church basement, so people ready to join me on this journey. They are set up for success, they’re safe, and as a result they are truly committed to the project. There is a wide spectrum of talent, but when you’re on stage you’re out there. They are people trying to be other people and it is what it is.

“A gentleman in town, Clark Wallace, has composed original music for the show and he has provided exactly what I needed for the transition scenes,” Gallo said. The score is performed by Wallace on guitar, accompanied by Melissa Stewart on violin and Hugo Nutting on cello.

There will be four performances of The Women of Tyringham which runs about 90 minutes with no intermission. Bring a lawn chair. Only a thunderstorm or downpour will cancel the show, but Gallo plans to go on under grey skies or drizzle, so if the weather is damp bring a poncho (not an umbrella). Tickets $15. Local residents and extended family $5 tickets, children under 12 are free.

The Women of Tyringham: An Original Oral History Theater Project

Conceived and directed by Ann Gallo

Purchase Tickets At Door On Day Of Event (Cash Or Check)

This oral history theater project is an overdue exploration and celebration of Tyringham, Massachusetts’ women. It reflects stories from similar rural towns where women’s voices have been tucked away for generations. Through recorded oral history interviews with a cross section of Tyringham women an original theater piece has been written and will be performed in a site-specific location. The mission is to collect, examine and articulate this group of Tyringham women’s individual and collective experiences.