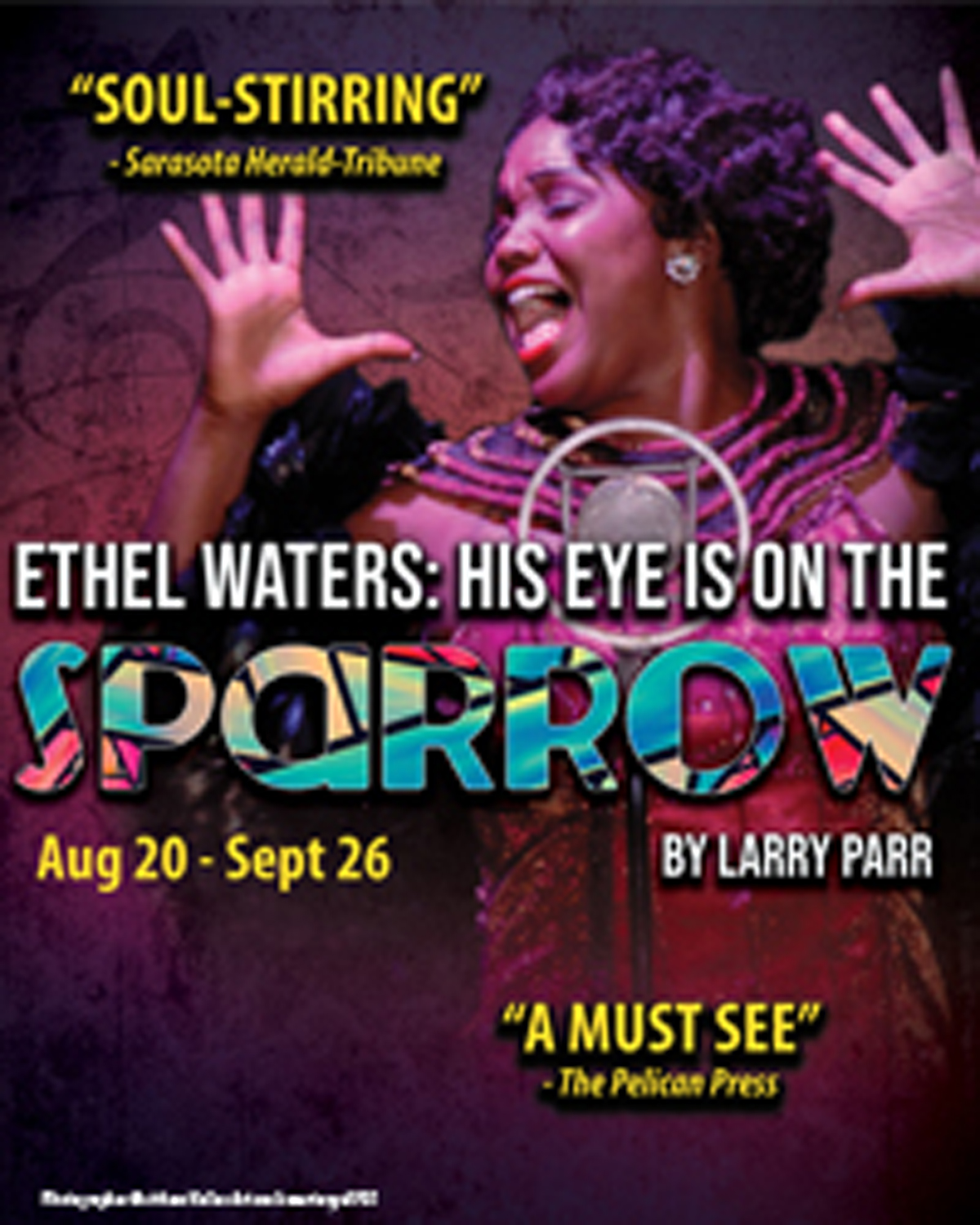 ETHEL WATERS: HIS EYE IS ON THE SPARROW, a powerful musical biography, begins previews at Capital Repertory Theatre’s new home at 251 N. Pearl St. on Aug. 20 with a run that continues through Sept 26.

With a book by Larry Parr, this show celebrates the life of the actress and recording star, who crossed racial barriers to win Grammy Awards, star in her own television show and be nominated for Emmy and Academy awards. Broadway veteran and award-winning actress Jannie Jones takes on the title role of Ethel Waters.

Capital Region audiences will remember Jones’ acclaimed performances at theREP in SMOKEY JOE’S CAFÉ, CROWNS, BLACK PEARL SINGS and most recently A NIGHT WITH JANIS JOPLIN, where she brought the house down as Aretha Franklin and Nina Simone. She has appeared in regional theatres across the country, most recently, CAROLINE, OR CHANGE at the Westcoast Black Theatre Troupe and THE BLACK STARS OF THE GREAT WHITE WAY at the National Black Theatre Festival. Her Broadway/First National Broadway Tours and Off Broadway credits include, THE FULL MONTY; ALL SHOOK UP; MAMA I WANT TO SING and FAITH JOURNEY. She won an AUDELCO Award for August Wilson’s Women as “Rose” in Fences and a Bay Area Theatre Critics Award as “Pearl” in Black Pearl Sings. She can be heard on Barry White’s Practice What You Preach and has performed in Carnegie Hall.

Jones created the role of Ethel Waters for the world premiere production at Florida Studio Theatre in 2005 and in their revival in 2019. She is delighted to re-create the role at theREP under the direction of Producing Artistic Director Maggie Mancinelli-Cahill.

“I am very excited to be returning to Capital Rep; having done ‘Crowns’, ‘Black Pearl Sings’ and ‘A Night With Janis Joplin’ in past years,” says Jones. “I can’t wait to look into the eyes of the warm and inviting audiences in Albany once again. I’m simply delighted to work with the wonderful Maggie Cahill and I am very honored to be doing the first full production on the theatre’s brand-new stage.”

Accompanying the production on piano is Josh D. Smith, resident Musical Director and Associate Artist for theREP. Smith has performed across the U.S. as an actor and musical director and is a veteran of nine musicals that he has arranged especially for theREP. He is a frequent performer at 54 Below in NYC and serves as Artistic Director of ArtisTree Music Theatre Festival in Woodstock, VT.

Playwright Larry Parr’s work has had literally hundreds of regional theatre productions.  His trio of plays celebrating illustrious Black female artists, HI-HATTED HATTIE, MY CASTLE’S ROCKIN’ and ETHEL WATERS: HIS EYE IS ON THE SPARROW have each won numerous playwrighting awards, including Kansas City’s Drama Desk Award, American Cinema Foundation Prize, Daytony Award, The National Arts Club Award, and the Barbara Anton Playwriting Award to name only a few.  Other works include INVASION OF PRIVACY and SHUNNED. Larry makes his home in Sarasota, FL and has been an Artist in Residence for Florida Studio Theatre numerous times.

The production ushers in theREP’s revised 2021-22 season, which was postponed due to COVID and marks the first fully produced show in theREP’s new theatre. The new facility, which includes a 309-seat Main Stage and a smaller flexible studio theatre, was completed in December 2020.

According to Mancinelli-Cahill, “This production starts a new era for theREP and I’m humbled and thrilled to finally be able to open our doors. Our patrons have been so supportive and patient, along with all the artists, who consider theRep one of their favorite places to work. Ethel Waters’ story of faith and resilience seems very apropos to this moment. I will be waiting with open arms to welcome everyone back!”

The show runs 90 minutes without an intermission.

Tickets range from $22 to $52. Reservations may be made online at www.capitalrep.org or by calling the box office from 10 a.m.-2p.m. weekdays at(518) 346-6204. Tickets may also be reserved in person at theREP box office two hours before show time Tuesdays through Sundays.

$16 student discounts are available at all performances with valid student ID.

A special opening night pre-show celebration will take place to light theREP’s marquee on Tuesday, Aug. 24 at 6:30 p.m. under the awning of the theatre. Songs of celebration will be performed as part of the official “ribbon cutting” to usher in the first season at 251 N. Pearl St. Curtain time on opening night is 7:30 p.m.

A “Behind the Scenes” pre-show talk with Jones and Mancinelli-Cahill will take place before the Sunday matinee from 1-1:30 p.m. Sept. 19. Jones will discuss the life of Ethel Waters and her importance in musical history. The event is free to ticket holders of any performance of the show.

No concessions will be served for the run of ETHEL WATERS; patrons may bring personal bottled water into the auditorium. A link to safety protocols can be found at www.capitalrep.org.