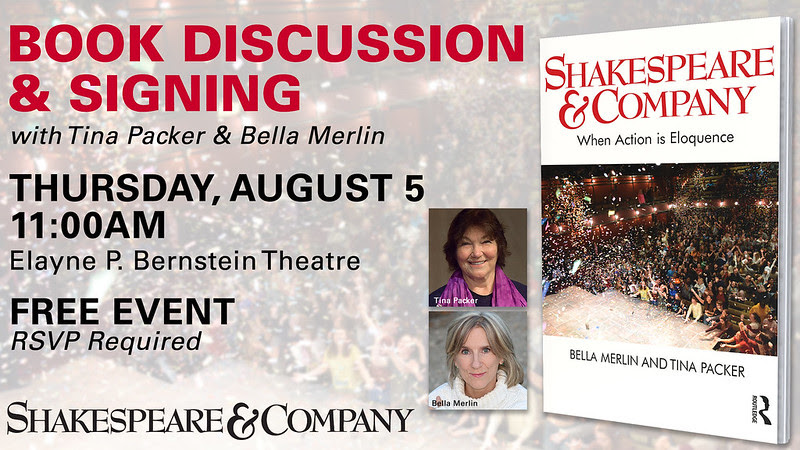 On August 5 at 11 a.m., join Bella Merlin and Tina Packer at Shakespeare & Company for a discussion of their book, When Action is Eloquence, followed by a book signing afterwards. This free event will take place at Elayne P. Bernstein Theatre. RSVPs are available here.

Shakespeare & Company: When Action is Eloquence is the first comprehensive insight into this internationally-acclaimed company founded in 1978 in Lenox, Massachusetts, by actor-director Packer and voice pioneer Kristin Linklater, with the transformative power of Shakespeare’s language at its heart.

Why act Shakespeare? What’s his relevance in the twenty-first century? Compelling answers to these questions lie at the center of this highly accessible journey into Shakespeare & Company’s aesthetics and practice. Drawing on hitherto unpublished material – including notebooks, lectures, interviews, rehearsal diaries – and the Company’s newly-collated archive, this book provides insight into a working theatre company and sheds light on the role Shakespeare plays in our modern world.

Merlin is an actor, writer, and singer-songwriter. She has been working for over twenty-five years in theatre, film, television and radio, and is a Professor of Acting and Directing in the department of Theatre, Film and Digital Production at the University of California, Riverside. She is also an actor-trainer and the author of several books on acting.

Packer is the founding Artistic Director of Shakespeare & Company in Lenox, Massachusetts. She has directed most of Shakespeare’s plays (some of them several times), acted in seven of them, and taught the whole canon in various guises at thirty colleges, among them Harvard, MIT, and Columbia. Packer was an Associate Artist with the Royal Shakespeare Company in England, working at The Royal Court and the Aldwych Theatre in London, Leicester, Glasgow, Edinburgh, and other regional theatres, as well as in television for the BBC and ITV, including David Copperfield with Ian McKellen. She lives in Stockbridge, Massachusetts.

“It is such a delight to know that a year after the book’s publication, we can at last celebrate the incredible work of this indomitable Company, brought together in When Action is Eloquence,” said Merlin. “I’m honored to be sharing at this event the fruits of four years of heartfelt labor.”

Both Packer and Merlin will be in attendance as well as signing books for sale in the Elayne P. Bernstein Theater lobby. Refreshments will be available. Seating is limited, so reserve your space now. Shakespeare & Company requests that unvaccinated patrons wear a mask at this event.

About Shakespeare & Company:
Located in the beautiful Berkshires of Western Massachusetts, Shakespeare & Company is one of the leading Shakespeare festivals of the world. Founded in 1978, the organization welcomes more than 40,000 patrons annually. The Company is also home to an internationally renowned Center for Actor Training and award-winning Education Program. Learn more at www.shakespeare.org.