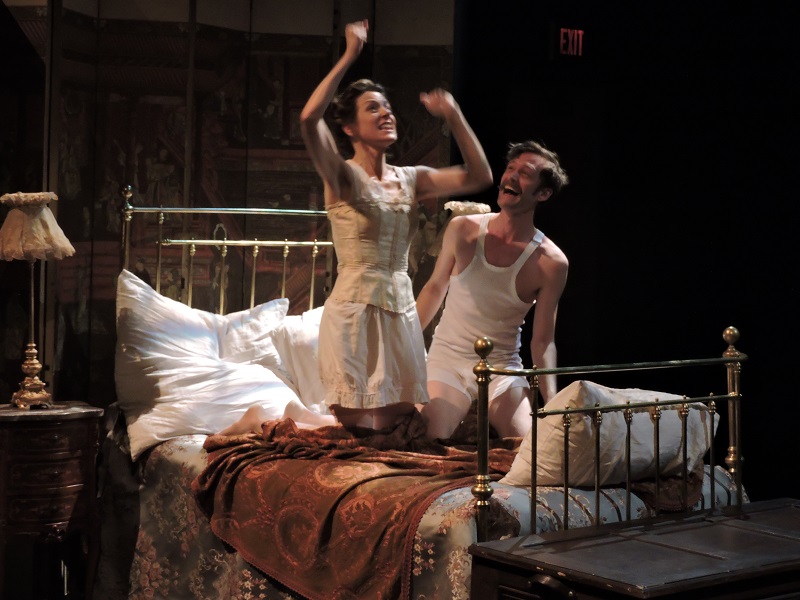 Mr. Fullerton, now playing at Bard College at Simon’s Rock’s Daniel Arts Center, is one of the most delightful works of historical fiction to be seen on our Berkshire stages. Produced by the Great Barrington Public Theater written by Anne Undeland and directed by Judy Braha in collaboration with an incredible team of designers and cast, the production fairly explodes with theatricality and imagination.

Ms. Undeland, a talented actor and member of several playwrights’ groups, mines every tool of the theatre to bring historical figures to life.  In her last full-length play, Lady Randy, produced by WAM and performed in 2019 at Shakespeare & Company, Undeland took on the title role, Sir Winston Churchill’s mother—a woman who used her sexuality to gain power over her many lovers and husbands.  In Mr. Fullerton, the protagonist is the sexually repressed, unhappily married forty-six-year-old writer, Edith Wharton (Dana M. Harrison), who develops a mad infatuation with her rascally lover, the title character (Marcus Kearns).

In an interview with The Berkshire Eagle, Undeland expressed her interest in writing about women over forty who “have a primary place onstage where they drive the action. . . doing things we don’t expect.” After reading Wharton’s letters to Morton Fullerton, who was told to destroy them but didn’t (they appeared in print in 1980, years after both of their deaths), Undeland saw in them “so much need and yearning and longing and magic” that she decided to write a play about their three-year affair. The other two characters are Wharton’s close friend, the writer Henry James (Glenn Barrett) and her longtime lady’s maid Posy (Myka Plunkett). Director Braha describes each of the four relationships as “intimate. Each makes up the fabric of love,” adding “Love madness is written all over this play.”

Undeland’s script is short on dramatic tension.  A chronicle of a one-sided relationship, it lacks a driving action to propel it forward.However, the playwright more than makes up for these missing elementsthrough her well-developed characters, strong dialogue, and limitless creativity.  Her detailed character descriptions are an invitation and a challenge for the actors; her choreographic suggestions inspire the director and actors to reach great heights in this production.  Here are Undeland’s words to her collaborators:  “Although the play is very intimate, there’s a great deal of theatricality:  ballets, sheets and more sheets, sheets of paper, bedsheets that hide and reveal, that billow, fold and fly.”  How much license these words give to the creative team and what endless possibilities they encourage!

It is through the Irish lady’s maid, Posy, that the audience is invited into the world of the play, beginning in Paris, 1907. She literally talks to us, sharing her thoughts and feelings about Wharton whom she has served for many years, giving up her own chances of marriage.  It is she who washes the bedsheets, removes the sheets covering the furniture in their rented apartment, and guides her mistress into the bath each morning, so she can devour the scattered pages of whatever book Wharton is writing, reveling in the fact that of the 150,000 sold copies of Wharton’s House of Mirth, it was Posy who first read those pages as she gathered and organized them. Myka Plunkett dances her way through the role with enormous energy–her multi-layered performance ranges from obvious pleasure in conveying her opinions to us through her comic asides, to her shame when she is chastised, to her spunk when she stands up to Wharton, warning her against Fullerton, to her tragic response to the accidental death of a young woman she holds dear—all delivered in her lovely Irish accent.

Henry James and Edith Wharton were close friends and intellectual snobs. James suffered from depression and though he felt deep emotion he could not express it.  That makes for some very amusing moments in the play as Barrett tries to comfort the lovelorn Harrison (who is like a daughter to him) but cannot bring himself to touch her, even as he passes her his handkerchief.  The two of them are wonderful together and though the playwright warns against doing a “full-out Noel Coward” they would be perfect in a Coward play—they have it all:  sophisticated language, comic timing, overdramatizing (Harrison’s barking dogs drive Barrett to distraction), farcical mugging, elegance and grace.  One of the strengths of this production is that we also see them at their most vulnerable: Harrison is embarrassed as Fullerton initiates her into a sexual relationship she never thought she deserved because she feels ugly, while Barrett is not only jealous of Harrison because of the money she has earned from her book sales but he too has a crush on Fullerton.

Kearns’ Fullerton begins as a bright, charming journalist who smothers her with compliments and constant attention but avoids answering any questions about his other nefarious affairs or activities.  Yet despite her love and generosity, he is eventually driven away by her neediness, finally ignoring her multitude of letters and discarding the diary he gave her in which she pours out her heart to him. As Kearns’ impatience with her increases, his visits become shorter and colder.

Bravo to every designer who worked on this play! The Leibowitz Theater is a long, rectangular black box with two rows of seats facing each other on either side of the space. Patrick Brennan’s design calls for black curtains on the sides, a Japanese screen on one end and a fireplace with mantel and mirror on the other that provide multiple entrances, all of them used to allow for the fast-paced movement required. As soon as a scene on one end (the living room) is over, the audience turns to the other end (the bedroom) so as not to miss the next entrance. Brahma keeps the characters moving (and often dancing) through and including the bows. The furniture and props are exquisitely period, befitting the expensive Vanderbilt apartment rented by Wharton. Brittney Belz’s costumes are authentically stunning for the men as well as for Wharton, with many changes (there must have been dressers waiting at the different entrances, including a silent stagehand dressed as a maid). Even the hairstyles are perfect. Jason Brown’s sound design offers music throughout the production, not only including classical piano music between scenes, but also music underneath most of the lines as well. It can’t have been easy for Brian Barnett to light such a long, narrow room, keeping up with the various scenes as they happen—but his work is absolutely seamless.

Finally, kudos to Judy Braha, the brilliant director responsible for this delectable concoction—may it have a long life and bring joy to all who are fortunate enough to see it.

MR. FULLERTON runs from July 21—August 1 at the Liebowitz Black Box Theater in the Daniel Arts Center of Bard College at Simon’s Rock. A limited number of tickets remain on Wednesday July 28 at 3:00 and 7:30, Friday July 30 at 3:00 and Saturday July 31 at 1:00. For tickets contact GreatBarringtonPublicTheater.org. The performance runs two hours including one ten-minute intermission. Masks are required.