An Inside Look at the Newest David Mamet Drama 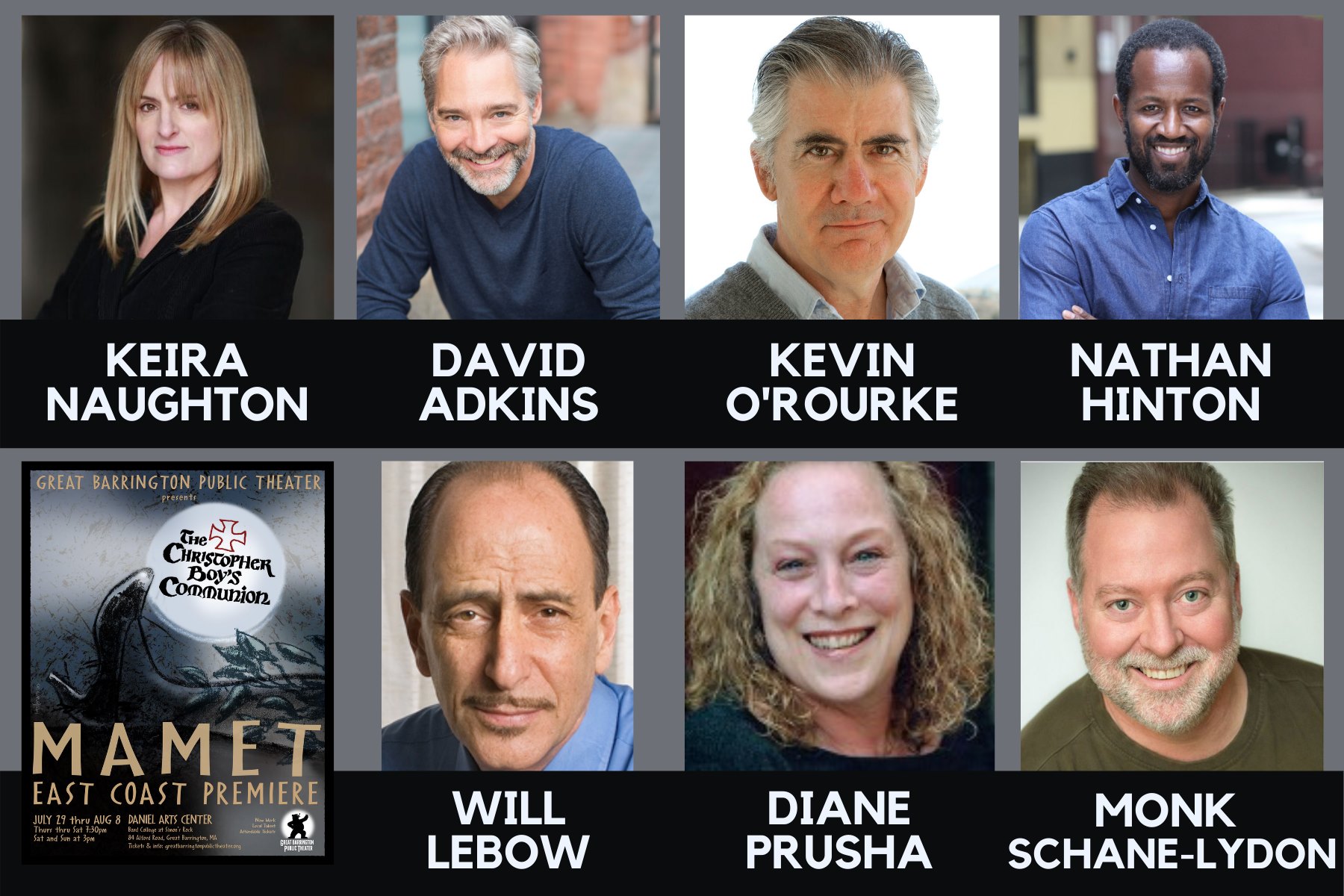 An Inside Look at the Newest David Mamet Drama

David Mamet is a Pulitzer Prize-winning playwright whose work in theater and film keeps him based in LA. So how did his latest drama, The Christopher Boy’s Communion, arrive at an upstart theater company in the Berkshires of Western, Massachusetts? Chalk it up to a longtime artistic collaboration between Mamet and local theater artist Jim Frangione, now the Artistic Director of Great Barrington Public Theater.

As Frangione recounts, “David sent me this play to read back in the Fall of 2019. It was an early draft, and he later sent me a more fully realized version of the play with substantial work done to expand the first act.” The play’s first act, in fact, was written as a separate, one-act play titled Nightstick, but as Mamet and Frangione discussed it they realized that it was the perfect exposition to lead into the dramatic structure of The Christopher Boy’s Communion. With the pieces combined, in Mamet’s words, “That’s the play.”

The completed show was tried out in LA just before the COVID-19 pandemic struck. “We agreed,” Frangione says, “That I’d direct the East Coast premiere of the play last summer with Great Barrington Public, his way of helping to put my new theater on the map.” Of course, COVID-19 necessitated rescheduling to the Public’s Summer 2021 season, now underway.

Prior to The Christopher Boy’s Communion, Mamet and Frangione worked together on many projects in various media spanning the past several decades, or, as David Mamet recently put it, “Jim and I met ages ago, under circumstances lost in the Mists of Time.” Their first collaboration was on Sketches of War at Boston’s Colonial Theater in 1988, a benefit to help in the creation of what is now, the New England Shelter for Homeless Veterans. The benefit included actors Al Pacino, Donald Sutherland, Michael J. Fox, Christopher Walken, William H. Macy, and more. Frangione, who is an actor as well as director, has appeared in several of Mamet’s plays and films, notably in the off-Broadway production of Oleanna and recently in Prairie du Chien at Atlantic Theater Company.

“Acting in David’s plays and films under his direction,” Frangione says, “I came to understand what some might consider Mamet’s signature style: the fractured, elliptical rhythms of his dialogue, where what isn’t said can often be more important than what is.” He sees that style reflected clearly in The Christopher Boy’s Communion, noting “Much like Oleanna or even Glengarry Glen Ross, there is very little extraneous action or dialogue in this new play. It’s a lean, and I believe, beautifully structured modern tragedy.”

Asked about handing the director’s reins of The Christopher Boy’s Communion to Frangione, Mamet said, “When I hand my work over to someone else, my choices are limited to getting out of town, or gnashing my teeth. In Jim’s case, I am out of town, and, had I been in town, no gnashing would have been necessary, as he is a superb director.”

The playwright recently discussed The Christopher Boy’s Communion and his relationship with Jim Frangione on Northeast Public Radio WAMC.