REVIEW: “Pippin” at the Mac-Haydn Theatre 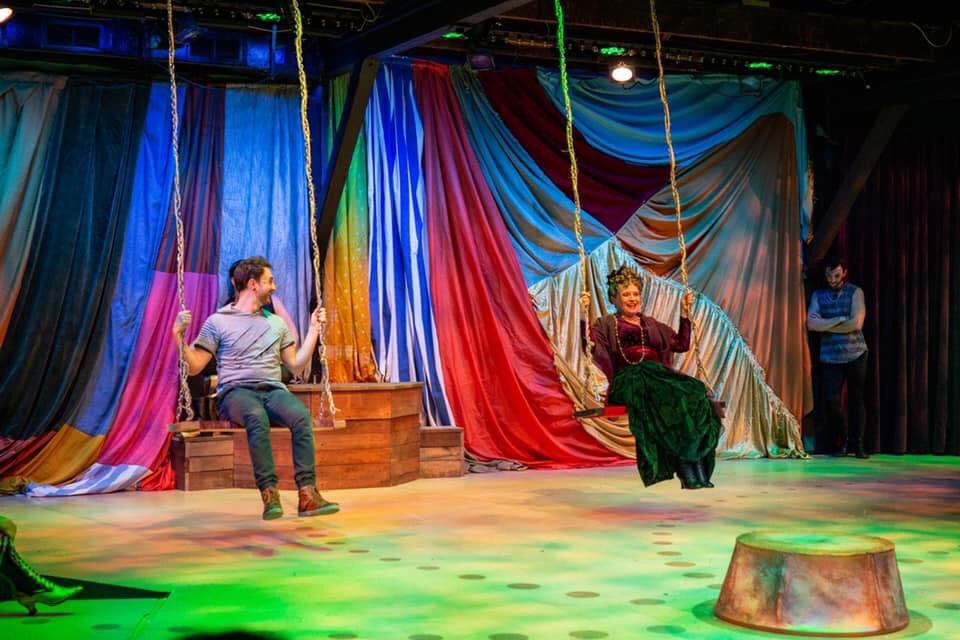 REVIEW: “Pippin” at the Mac-Haydn Theatre

Full Disclosure: After almost 2 years without the pleasure and privilege of being able to enjoy live theatre, I was becoming rather desperate for another opening, another show—anything to be taken out of the Stygian gloom of lock-downs, shut-downs, & mask-ups. So desperate was I that I gave serious consideration to booking my 89 year old mother for a front porch cabaret performance of WW II ditties, long-forgotten church hymns, or even even bird-call imitations.

Fortunately for all concerned, and no doubt especially for the sensibilities of our neighbors, 2021 has brought somewhat of the return of normalcy, at least allowing the performing arts to see lights and curtains going up, with audiences eager to appreciate the actors’ efforts. Even more fortuitously, The Mac-Haydn Theatre has reopened with a production that more than compensates for those months of darkened empty stages and empty houses. So, following a 2020 season with a stage left in the dark, the MAC IS BACK, and its audiences are all the better for the return.

The season-opener of Pippin is a perfect showpiece heralding that triumphal return. Full of light, color, sound and fury signifying much more than nothing, director John Saunders has conjured up a production that quickly fulfills its Leading Player’s promise that there’s Magic to Do. In just no time at all, it’s clear that the Mac hasn’t missed a beat, and with a newly-reconfigured stage that broadens and widens the performance space to the advantage of audience and actors alike, a young man’s journey seeking fulfillment in his life unfolds over the course of 2 hours… 2 ½ with an intermission appreciated by the fully-masked audience, a requirement put into effect as of the Saturday evening performance.

Side note: Box Office staff shared that while they did receive some cancellations and requests for refunds based on the newly-implemented policy requiring the audience remain masked during the performance, the majority of attendees seemed not only undeterred and unperturbed by the mask requirement, but also appreciative of the pro-active approach. I applaud their choices to ensure that performances can continue as safely as possible for actors and audience alike.

Unlike many productions, most notably the 2013 revival directed by Diane Paulus which set the action squarely within the circumference of a circus ring, Saunders has chosen not to set his production under the Big Top of a circus atmosphere, but rather creates a roving band of players, a traveling troupe of Medieval actors telling a story under the iron-fisted rule of their Leader. Touches of circus life emerge in Emma Cummings’ set, with colorful drapery, a set of swings, but overall, we have a a performance based on the simplest of premises:–Young Man Seeks Meaning in Life. That the young man is heir to the throne of King Charlemagne, with a more wily than wicked stepmother, a half-brother bent of slaying the enemy right and left, a deliciously commanding Leading Player, and the requisite love interest who ultimately serves to show Pippin his true place and purpose in life, provides the path for the progress of the story.

In the title role, Kylan Ross shines as a young man seeking to find his own purpose and meaning in life. He moves his character from naive, ingenuous, idealistic youth to disillusioned, temporarily dissipated male, to political power-seeking, finding, and ultimately abdicating ruler with the skill of a seasoned veteran. His character grew visibly in strength, volume, power and presence as the show progressed, a performance s acknowledged with equally powerful applause at curtain call.

Amber Mawande-Spytek makes a fine debut at the Mac as the Leading Player. With a strong voice, a confident, almost cocky presence, and a domineering air, she controls and commands each scene as a Leading Player should. Don’t tell HER she’s not THE star of the show !

Ashley DeLane Burger’s Fastrada comes across as a cross between a deranged Tinkerbell and seductress Lola from Damn Yankees, spinning and pirouetting and undulating through “Spread a little Sunshine”, and keeping husband Charlemagne under the control of her vividly painted thumbnail. Mikel Hunter is in equal parts a befuddled and empirical Charlemagne, holding his own against all comers.

As Berthe, Pippin’s more-than-young-at heart grandmother who takes it upon herself to school Pippin in the most effective approach to life, Liz Gurland wastes No Time at All in virtually stealing the show with her paen to the art of aging gracefully….although not TOO gracefully, and not too quickly. Having seen Adrienne Barbeau (yes, THAT Adrienne Barbeau…Maude’s daughter) in a national tour, and marveled at her then-70-something body undulating, writhing, and virtually contorting itself into acrobatic positions that could potentially cripple a younger performer, I wondered how Saunders would choose to bring his Berthe into the spotlight. Thankfully, Liz Gurland undertakes no such physical gyrations, relying instead on lusty and lustful romping through her number, with a delightfully saucy and sassy delivery.

My choice for break-out star of 2019 in Ragtime, Maya Cuevas, is a delightful Catherine, the average, ordinary kind of woman who clearly sets her cap for Pippin to prevent her estate from ruin, and save her and daughter Thea—engagingly and perfectly played by Clementine Kline—from a life of widowhood and fatherlessness. Despite a burst of rebellion from Pippin, who decries the idea of life consigned to cleaning the pigsty and thatching the roof by pointing out he is surely too “Extraordinary”, Catherine nonetheless ultimately gets her man. Ross’s and Cuevas’s duet of Love Song is a lovely moment,, and Cuevas’s delivery of “I guess I’ll miss the man” had a sincerity and a wistfulness that not only was in perfect keeping with her character, but riveted the audience during its delivery. The few seconds of silence that followed as she concluded testified to the excellence of her performance.

As Player with Fire, David Aaron may have only a word or 2 of dialogue, but his appearances on stage are nonetheless riveting. Lithe, supple and sinewy in his movements, he compels attention as he and the Leading Player interact in their own subtle “mating dance” throughout the show.

Veteran of many a Mac-Haydn production,Lighting Director Andrew Gmoser has created another of his signature stunning looks, brimming with color and movement and intensity. There were audible, and well-deserved, gasps in response to the lighting for “Glory”, with a black light effect working in perfect harmony with the slow-motion action of the cast. My 2 companions, first-timers to the Mac’s charms, were suitably and volubly impressed with the lighting throughout the performance…and they were most correct in their assessment.

Choreographer Elizabeth McGuire puts her own mark on the movement and rhythm of the piece. While the 1972 Broadway premiere brought Bob Fosse’s signature flair and style to the stage, McGuire’s work is virtually all her own, although touches of classic Fosse moves seamlessly worked their way in.

Angela Cartensen’s costumes are perfect for a traveling troupe of Medieval players. Her works presents a bedraggled, cobbled-together cast of characters, weary from traveling the road and presenting repeated performances along the way. With its slightly raunchy, almost underworldly look, her creations made me think they would also be perfect for a grunge-look road company production of Camelot.

Yes, the Mac is back, and Pippin is the perfect welcome back to the theatre-hungry world. The Leading Players promises parts to perform and hearts to warm, and delivers on the promise 100 fold.

Pippin runs through August 8 at the Mac-Haydn Theatre. 1925 Route 203 Chatham, NY. COVID protocols including full masking for audience members are in place.