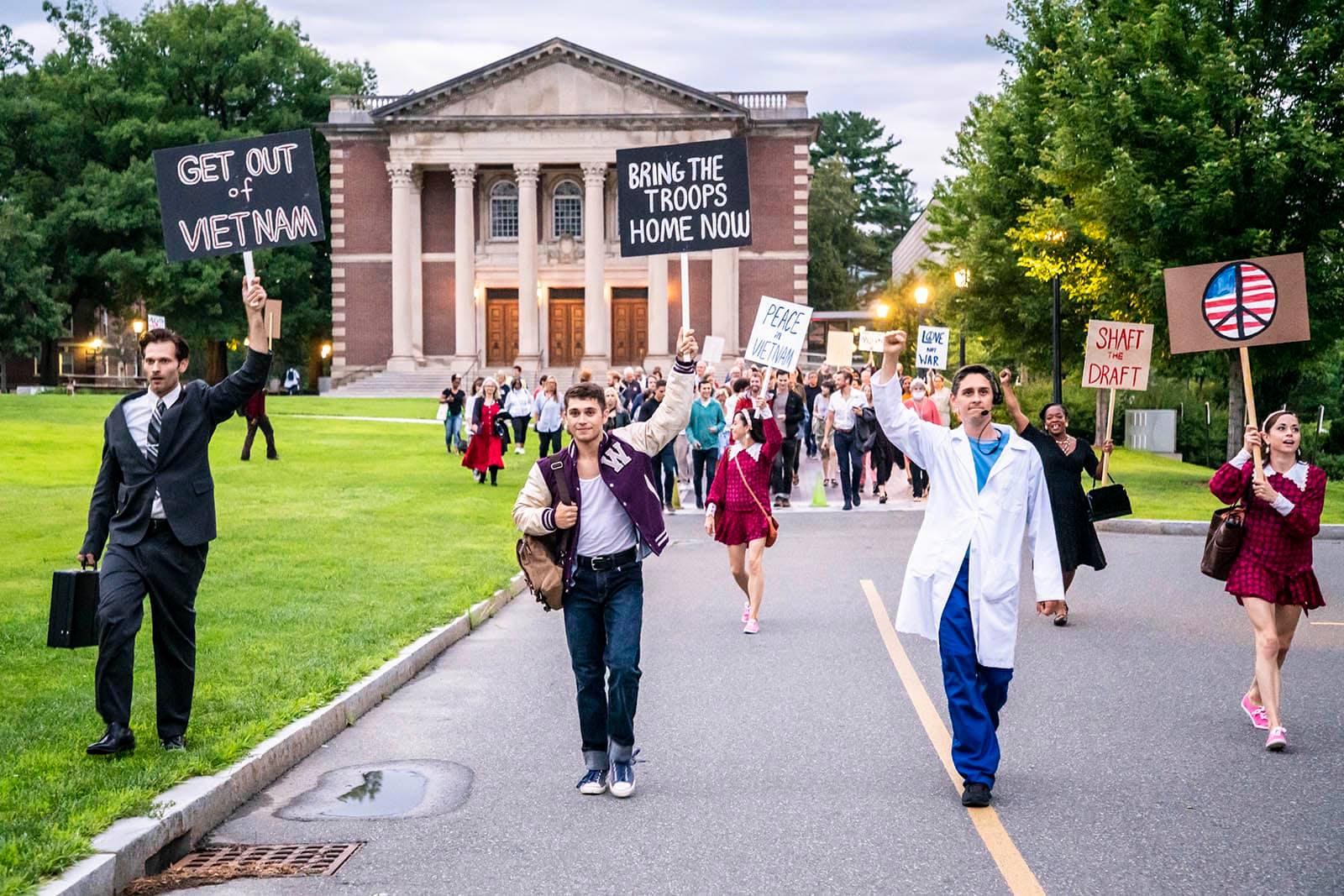 In 2020 Williamstown Theatre Festival Artistic Director Mandy Greenfield attended “American Dream Study,” the Forest of Arden Company‘s site-specific performance in Columbia County, NY, and invited director Michael Arden to come to Williamstown and collaborate with the WTF’s Community Works program to produce something similar here. Eric Berryman, an FOA member, and playwright Jen Silverman, whose plays Dangerous House (2018) and The Roommate (2017) were produced at the WTF, came on board to devise and write with the FOA and Community Works companies, and ALIEN/NATION was born.

ALIEN/NATION is an “immersive theatrical experience.” It is two shows in three acts – the Walking Show which you watch standing up, and the Driving Show, which you watch from your car – with a shared second act. Everything takes place out of doors on the Williams College campus. Three real life incidents were used as jumping off points – the occupation of Hopkins Hall by African-American students at Williams and the Apollo 11 moon landing, both of which happened in 1969, and the purported alien abduction of Betty and Barney Hill in 1961. The cast of 38 includes Equity, non-Equity, and Community Works performers.

I have worked diligently to gather resources that present as complete a picture of this complex theatrical experience as possible, and I encourage you to read and watch them all. I was fortunate to get to speak with Michael Arden, Eric Berryman, and Jen Silverman shortly before the show opened. Williamstown native and Community Works participant Deborah Burns (no relation to me) wrote about her experience, and audience member Ben Davidson was kind enough to contribute his explanation for some of the technical preparation potential audience members need to do.

In addition I spoke to some people who had attended the ALIEN/NATION Walking Show and they had all enjoyed their experience and spoke highly of all the hard work and close coordination that had gone into creating and performing this cutting edge theatrical experience. The few issues they raised were technological rather than artistic, which is why I encourage you to read the instructions CAREFULLY and ask questions in advance so that you have the best opportunity to enjoy your experience.

Author’s Note: I have NEVER written about a show as technically and technologically complex as “ALIEN/NATION” running July 20-August 15, 2021, at the Williamstown Theatre Festival. While I have linked to resources that describe what you will need and what to expect, I will not try to explain those details here. Suffice it to say that you need VERY SPECIFIC pieces of equipment in order to see and hear the show. I strongly recommend that you read all the instructions and ask any accessibility questions before you buy your tickets.