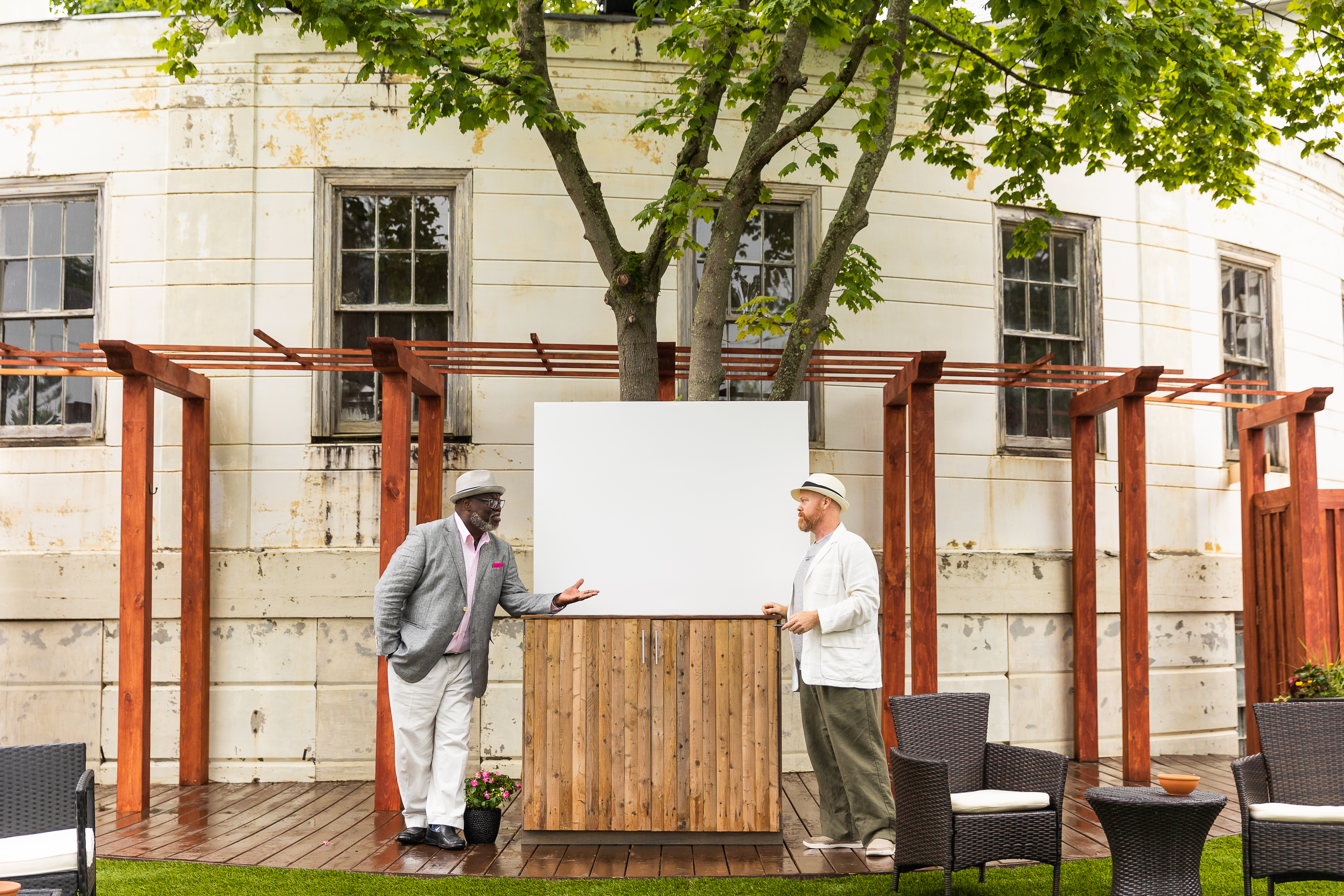 Yasmina Reza’s play ART is enjoying a robust production by Shakespeare & Company in their outdoor Roman Garden Theatre this month.  In this dark comedy, seen during its final preview, Reza uses the purchase of an expensive work of modern art as a springboard to plumb the depths of the fifteen-year relationship between the purchaser, Serge (Michael F. Toomey) and his two closest friends:  Marc (“ranney”) and Yvan (Lawrence L. James).

Reza, a French playwright, actress, novelist and screenwriter garnered multiple international awards for both ART(premiering in Paris in 1994) and later God of Carnage (premiering in Zurich in 2007), which she adapted into a screenplay, co-written and directed by Roman Polanski.  Both, having been translated into English by Chistopher Hampton, won Best Play awards for their Broadway productions.  Reza has an uncanny ability to transform middle-class characters faced with a resolvable conflict into hysterical children, peeling off layers of civilization to reveal a raw underbelly of emotion.  In God of Carnage, two sets of parents meet to work out how to deal with their children’s playground fight, ending in the carnage of the title.

In ART, Marc, an aeronautical engineer, introduces the audience to the $200,000 painting which becomes the title character:  a white canvas with barely visible white diagonal lines.  At various points other characters also break the fourth wall as they share their inner monologues with us.  Marc is not only baffled by this overpriced, practically blank canvas, but also feels abandoned by Serge, who he believes betrayed him by transferring his attachment from Marc to this painting and to the cognoscenti of the art world.  Further, after seeking validation from his friend Yvan, Marc finds himself completely isolated when he learns that Yvan, the ultimate mediator, actually likes the painting.  The insecurities of all three characters, their neediness, and their interdependency are revealed as their arguments, at first appearing nonsensical, become painfully personal, threatening to derail their longstanding friendship.

“ranney”’s Marc, playing to the sensibilities of those of us who also wonder about the appeal of modern art, performs an elaborately funny pantomime with Toomey as they position themselves to view the painting in its best light.  Nevertheless, he concludes that it’s s—t.  His comic timing, his body language and his command of the stage engage us from the beginning of the play, arousing our sympathy when he tells Serge:  “there was a time you were proud to be my friend.”

Toomey, a Fight Choreographer and teacher with Shakespeare & Company, where he performed the acclaimed An Iliad in 2015, plays Serge (a dermatologist) as a man desperately trying to justify his purchase of a painting that he admits has ruined him financially.  He cannot understand why Marc is so enraged, fueling the fire as he glorifies his masterpiece and its creator.  As their fight accelerates into a ferocious battle, the audience finds itself torn between laughter and horror.  Toomey, ever inventive as he deals with the challenges of an outdoor theatre and an oversized painting, offered some of the funniest ad libs as the unscripted wind almost carried away his precious artwork.

Yvan, played to the hilt by James, is a wiry actor whose comic ability, both physical and vocal, enlivens a huge monologue (about mother and mother-in-law problems as he plans his upcoming wedding) to such an extent that it leaves the audience wanting more.  James runs the gamut of emotions, as a loser who cannot hold a job, a man who describes himself as a “buffoon, dying of loneliness,” a coward with no opinions, who, after six years of therapy just wants to continue to be a joker to his friends.  What a pleasure it is to watch him perform!

One of the major challenges for this cast and director, Christopher V. Edwards, was to re-imagine a play that takes place in three separate Parisian apartments, to fit this outdoor space in the Berkshires, substituting local references.  Artistic Director Allyn Burrows had planned a season of outdoor productions to suit Covid protocols, even constructing the beautiful New Spruce Theatre for King Lear.

The Roman Garden Theatre, a thrust stage with a three-sided audience, contains a small raised platform with wood chips below and what appears to be fake grass as its floor.  The set, designed by Patrick Brennan, consists of a few black chairs and a coffee table, with the clever addition of a wooden cabinet surrounding an upstage tree, with doors that open to reveal a bar with drinks, nuts, and olives (the only nourishment these characters consume, though they continually complain of hunger and the need to go to dinner).   The director relies on his sound designer, Brendan F Doyle, to separate the scenes from the monologues and to suggest different locations by playing jazz music, but unfortunately the trumpets are so loud that the musical segments distract from the smoothness of the performance.  Costume designer Stella Giulietta Schwartz dresses the more upscale performers (Marc and Serge) in jackets and slacks, while Yvan, who starts out in slacks, eventually wears colorful matching shorts and shirt that fit his character perfectly.  All wear jaunty hats, probably because they are in the sun, despite a dark cloth overhead.  Among the theatregoers are some geese, who register their reactions from time to time.

After a difficult year without the theatre to help us cope, it is wonderful to laugh with an audience, even as we glimpse the hurt underneath.

ART runs from July 30—August 22 at Shakespeare & Company’s Roman Garden Theatre.  For tickets contact www.shakespeare.org or call the box office at 413-637-3353.  The performance runs ninety minutes with no intermission.