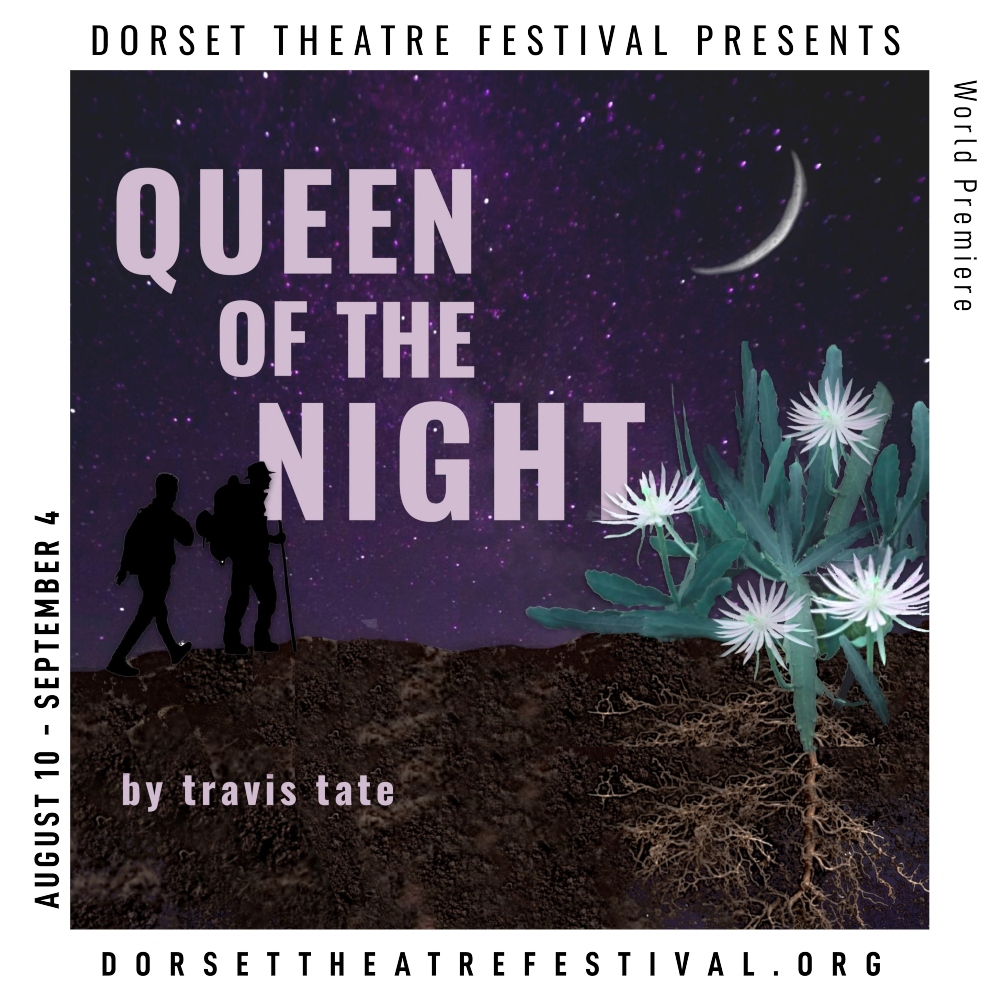 (Dorset, VT – August 3, 2021) Dorset Theatre Festival will close out its 44th main stage season with the world premiere of Queen of the Night by travis tate, outdoors at the Southern Vermont Arts Center in Manchester, VT. Directed by Raz Golden, the play stars Danny Johnson (All The Way, The Song of Jacob Zulu) and Leland Fowler, who appeared in the Festival’s 2018 production of Skeleton Crew.

In Queen of the Night, recently divorced Stephen and his millennial son, Ty, set out on a camping trip to their old stomping grounds in southeastern Texas. As an important family event approaches, father and son attempt to survive the woods, and one another, braving the bears and reckoning with the wilderness of their past. Despite low cell signals and high emotions, the two characters try their best to connect in this timely, illuminating, and entertaining play.

“travis’ play is an honest and poetic comedy about family. We are so proud that our audience will be the first to experience this funny and beautiful play in person,” said Dina Janis, Dorset Theatre Festival’s artistic director.

“This play, so filled with hope, is one that felt truly perfect for this moment in time, and our hope is it will serve as a reminder of our shared humanity and the power of love, laughter and most importantly – human connection in our lives.” Janis said.

“I’m beyond thrilled to have the premiere production be with the amazing artists at the Dorset Theatre Festival,” said travis tate, playwright. Dorset, in partnership with Aye Defy in New York City, produced a week-long workshop of the play this spring on Zoom. “I started the developmental process with Aye Defy, an NYC organization that develops work with artists – only one step in the play’s life starting in 2018. Dina and Jade [King Carroll] joined along in the process in efforts to uplift the play and create a pathway for its journey to production. I’m so grateful to have a real life, in person production, most especially after this trying and difficult year where the pandemic affected so many theatre artists, art enthusiasts and so many people around the world,” said tate.

travis tate is a queer, Black playwright, poet and performer from Austin, Texas. Their poetry has appeared in Borderlands: Texas Poetry Review, Underblong, Mr. Ma’am, Reservoir, and upcoming in the Shade Journal and apt, among others. They were a finalist for the Cosmonauts Avenue 2018 Poetry Prize. Their one-person drag show, It’s a Travesty! One Night with Jazzie Mercado! was presented at the Cohen New Works Festival (2017) and at Salvage Vanguard Theatre’s Three-Headed Fest in November 2017. Their play MotherWitch was featured as a part of the 2018 UTNT (UT New Theatre). travis holds a B.A. in Theatre from the University of Texas at Austin and an M.F.A. in writing from the Michener Center for Writers at University of Texas at Austin, where they studied playwriting and poetry.

“Queen of The Night is a very special play for me because it imagines a futures that for me as a queer black has come true. I hope this play can show those individuals out there that may be struggling with conversations around queerness and masculinity, especially with their families, that there is hope— that this play can stand as a type of beacon, a light in the dark, a lighthouse through the dark forest of discovery and connection,” said tate.

“When I first read this play I was blown away by the beauty of the language and physical space within the play, but what really stayed with me was the complexity of the relationship between this specific father and son working towards understanding. It is such a heartwarming play and it takes place in the woods so I can not wait to share this with Dorset’s audience under the stars at Southern Vermont Arts Center,” said the Festival’s resident artist, Jade King Carroll.

Queen of the Night will begin at 8:00 PM on Tuesdays, Wednesdays, Fridays, Saturdays, and Sundays beginning August 10 at Southern Vermont Arts Center in Manchester, which is also home to art galleries, the Manchester Music Festival, and the new CurATE Cafe.

“We have been so excited to partner with SVAC this summer, welcoming folks from our community and beyond to this stunning arts campus filled with galleries, music, sculpture trails and more at prices that are completely affordable to all. We are really encouraging people to come for the day and stay for the play,” said Janis.

Dorset will offer on-demand streaming versions of this year’s main stage plays, which will also be available as an option for patrons who are unable to reschedule if they miss a performance due to weather conditions.

Tickets for the outdoor season are on sale now at dorsettheatrefestival.org.

The production co-sponsor Queen of the Night is the Dorset Union Store. The outdoor main stage season is sponsored by Church Street Hospitality, and support for Dorset Theatre Festival’s 44th season is provided by the Rodgers Family Foundation, the Shubert Foundation, the Harold and Mimi Steinberg Charitable Trust, the National Endowment for the Arts, the Vermont Arts Council, and members of the Dorset Theatre Festival World Premiere Circle.

Raz Golden – Director, is a director of theatre, film, and audio. He focuses on new and classical texts, as well as narratives that explore shared cultural histories and myths and that center people of color. His directorial work, no matter the medium, embraces collage and juxtaposition, speculative genres, and multiple modes of storytelling. Raz is a 2019 Drama League Classical Directing Fellow and a former Resident Director at The Flea. He has developed work with the Public Theatre, The National Black Theatre, NYU Tisch, Hudson Valley Shakespeare Festival, Waterwell, Williamstown Theatre Festival, and McCarter Theatre. He is currently a member of the Drama League Director’s Council and the Roundabout Directors Group.

Danny Johnson – Stephen – Broadway: All The Way and The Song of Jacob Zulu. Off Broadway: The Last Saint on Sugar Hill, Our Lady of 121st Street, and A Soldier’s Play. Regional: The Skin of Our Teeth (Berkshire Theater Group), Familiar (The Old Globe), Seven Guitars (Yale Repertory), The Mountaintop (True Colors Theater), What I Learned in Paris (Alliance Theater), Joe Turner’s Come and Gone (The Goodman Theater), A Raisin in the Sun (Intiman Theater). Additional productions at: Weston Playhouse, Steppenwolf Theater Company, and Huntington Theater Company among many. Television: The Equalizer, Pose, Daredevil, Luke Cage, For Life, Quantico, Shades of Blue, Law and Order SVU, and many popular shows. Film: Villains, Lazy Susan, Still Here, and the HBO classic Don King: Only in America.