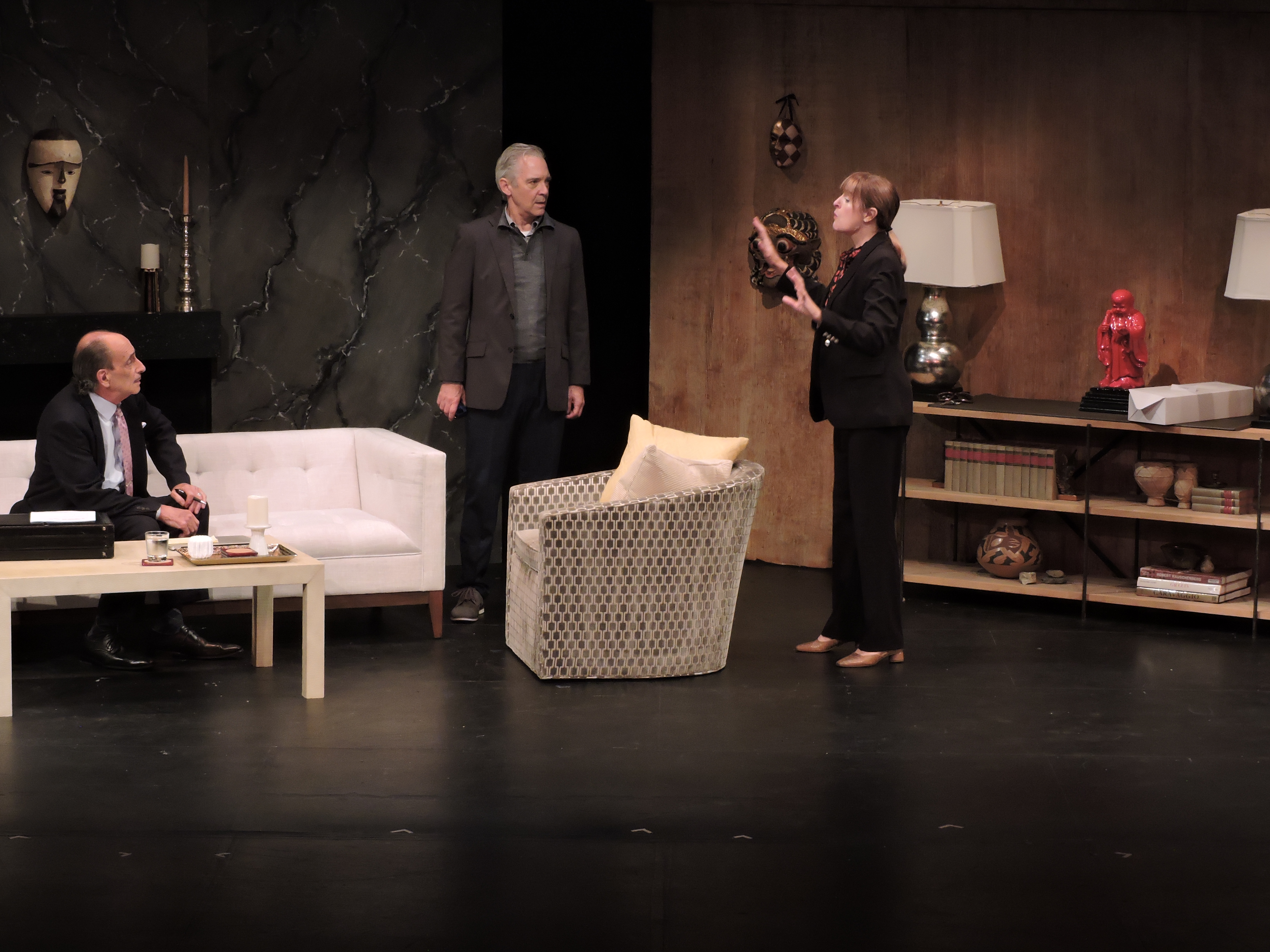 How did David Mamet’s newest play, The Christopher Boy’s Communion, find its way to the Great Barrington Public Theater where its East Coast Premiere is being staged in a taut, well-paced production?

The answer:  Jim Frangione, the director and Artistic Director of the company, has known and worked with Mamet for almost 40 years, directing and acting in his plays and films.  He saw The Christopher Boy’s Communion in a small Los Angeles theatre in 2020 and indicated his interest in bringing it to Great Barrington this season (having postponed it last summer because of Covid).  Mamet is a successful playwright, screenwriter, film and theatre director, and author.  He was awarded a Pulitzer Prize for Glengarry Glen Ross and New York Critics’Circle awards for that play as well as American Buffalo.  Other well-known plays for which he received award nominations include Speed-the-Plow and Oleanna.  Several of his screenplays were nominated for Academy or Golden Globe awards including The Verdict, House of Games, and Wag the Dog.

In his notes to The Christopher Boy’s Communion, Mamet describes the play as a tragedy, according to Aristotle’s guidelines in The Poetics.  However, if a character makes a choice of her own free will, knowingly accepting the sacrifices to which she must agree—does that qualify as a tragedy?  The play begins with a front-of-curtain conversation at a bar between two detectives:  Hollis (Kevin O’Rourke) and Burke (Monk Schane-Lydon), who represent “the Chorus” for Mamet.  Hollis recounts the story of a brutal rape and murder in the park, witnessed by a fellow detective, who afterwards committed suicide.   Once the curtain rises, we are introduced to the protagonist, Joan (Keira Naughton), mother of a young man in prison who has been charged with the crime, and her husband Alan (David Adkins).  A devout churchgoer, Joan decides not to attend the Christopher boy’s First Communion so as not to mar the ceremony since everyone knows about her son Michael.  The rest of the play chronicles Joan’s attempts to save Michael from spending the rest of his life behind bars.  After unsuccessfully consulting a lawyer and a priest, her desperation leads her to the machinations of a clairvoyant/medium, who forces her to decide what she is willing to pay.

Performing in a Mamet play requires particular skills.  Frangione describes the challenges of Mamet Speak:  fast-paced, meticulous dialogue that is often interrupted (sometimes after only one word), using multiple ellipses, containing its own rhythm and emphases.  Kevin O’Rourke, in the play’s first scene, proves himself to be a master at this, providing us with essential exposition as part of a rambling monologue extolling the virtues of a policeman’s nightstick.

Mamet not only prescribes how his language must be used but also what constitutes good acting.  He is a controversial iconoclast whose books and teachings on the subject denounce our traditional methods of actor training (see TRUE AND FALSE:  HERESY AND COMMON SENSE FOR THE ACTOR).  A founding member of the Atlantic Theater Company, which presents new work on its two stages, he and his colleague William H. Macy (formerly W.H. Macy) developed a system of acting known as Practical Aesthetics, detailed by his students in their book, A PRACTICAL HANDBOOK FOR THE ACTOR.  In his introduction to this book, Mamet warns actors:  “Most acting teachers, unfortunately, are frauds, and they rely on your complicity to survive.” In an interview with Joe Donahue on WAMC, Mamet condemns long rehearsal periods, the process of analyzing lines (“say the stupid lines, period”), talk backs and reviewers.

Keira Naughton as the mother excels both in her mastery of the language and her powerful, unstoppable determination to pursue her objective:   freeing her son, letting nothing superfluous enter into her performance.  Mamet dedicated the play to his wife, Rebecca Pidgeon, who played Joan in the L. A. production.  But Naughton nails it.

Joan meets her match in the clairvoyant, skillfully played by Diane Prusha.  She is a towering presence, wearing her long, multi-colored, fringed, sparkling shawl and gaudy jewelry (thanks to Costume Designer Brittney Belz).  She is a force to be reckoned with in this riveting scene, frightening and overwhelming, as she calmly serves tea to her guest.

David Adkins, one of the most gifted actors in the Berkshires, seems a bit lost as Joan’s husband Alan.  True:  it is hard to imagine anyone (except Prusha) holding his or her own against Naughton’s single-mindedness, but Adkins seems to fade into the background.

Scenic Designer John Musall creates a modern living room for the couple’s home, while all of the other scenes are played against a black scrim, obscuring the room behind it.  Lighting Designer Lara Dubin provides the spotlights that narrow the focus and zoom in on those scenes—a strong and effective collaboration between Musall and Dubin–who also adds vibrant color to the scrim in the presence of the clairvoyant.  Jason Brown’s musical selections, including bagpipes and piano selections, aid the transitions as stagehands quickly adjust the sets.

Frangione maintains the underlying tension of this piece, a hallmark of Mamet’s work.  He allows us no time to think, as we are thrust forward on this strange and mysterious ride.