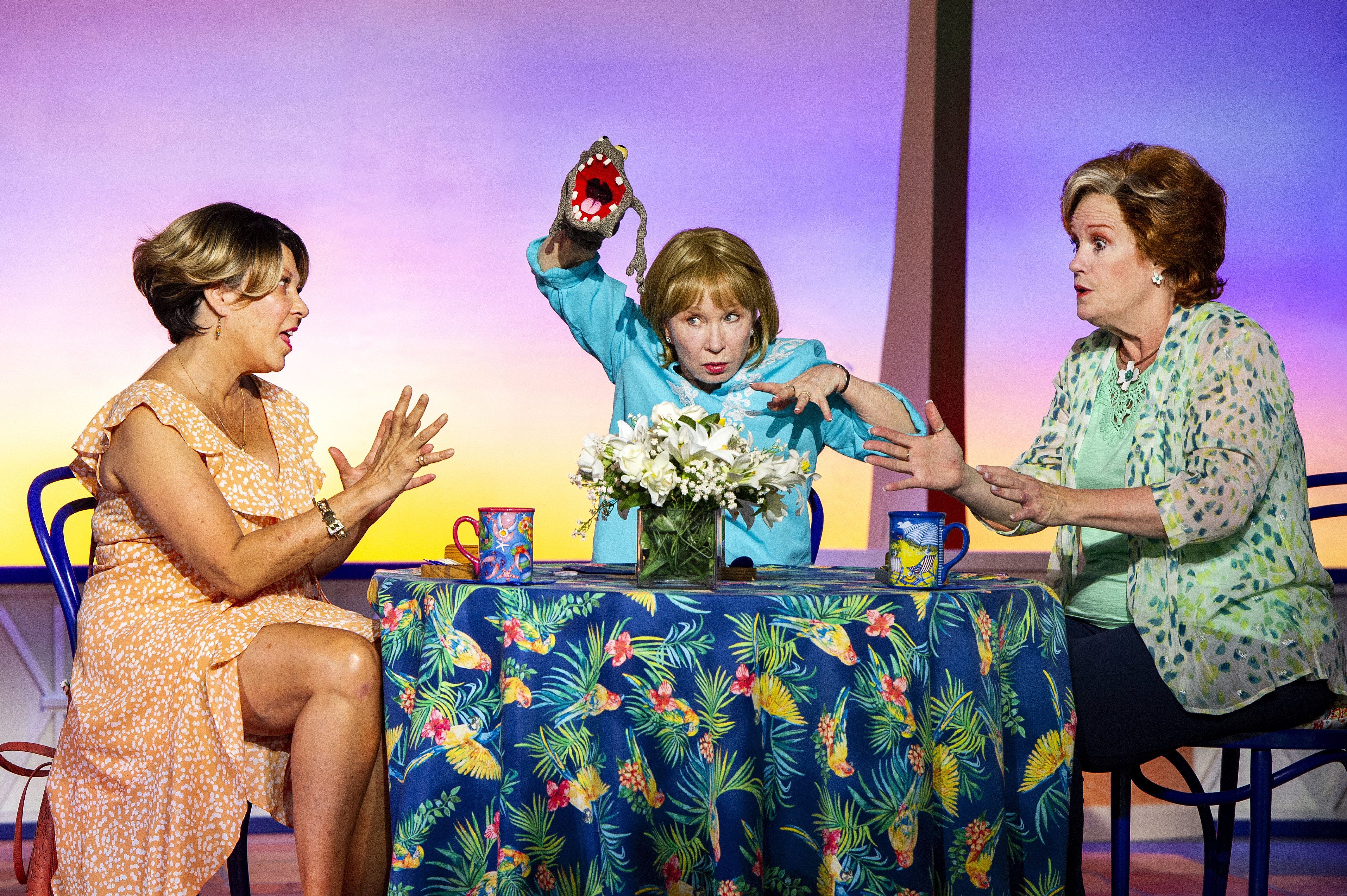 The city of Boca Raton, Florida, conjures up an image of high-end country clubs and safe gated communities.  A new play, Boca by Jessica Provenz, produced at Barrington Stage Company’s tent at their Production Center, is a series of twelve ten-minute plays that take place in this environment.

A very talented cast of six play two recurring roles each in these short works that develop into several intertwined plot lines.   There are a goodly number of guffaws, chuckles,  smiles and occasional poignancy.  Some of the pieces have been seen before in Barrington’s 10X10 productions, but they still hold their humor.  “Stay, Please” with Peggy Pharr Wilson as Elaine and Kenneth Tigar as Bruce is one example.  The relationship that evolves is used in a later play “On The Rocks.”

“Silver Alert: Part 1” featuring Debra Jo Rupp (Iris) and April Ortiz (Louise) is an especially comic piece.  While being caught in Boca’s traffic they decide to escape their daily routines and relationships and to keep driving a la Thelma and Louise of movie fame.  This is further developed in “Silver Alert: Part 2”which turns from being light-hearted to touchingly sentimental.

“All In Ladies” opens as Elaine (Peggy Pharr Wilson,) Susan (Debra Jo Rupp,) and Janet (April Ortiz) are playing poker.  Susan informs them that she has an illness and has prepared her estate and her will except for who will inherit her husband Luis (Gilbert Cruz.)  All these characters reappear in other plays.

Robert Zukerman and Kenneth Tigar effectively bounce off each other as Marty and Mo, two old cronies who enjoy playing oneupsmanship in “The Royals” and “Epilogue.”

The cast is obviously enjoying themselves as they mine the laughs with their vocal delivery, pregnant pauses, facial expressions and a sense of drama.  Directed by Barrington’s artistic director Julianne Boyd, the show moves smoothly with choreographed scene changes executed by the cast and the backstage crew.  She has imbued the production with broad humor and affecting sensitivity.

Brian Prather’s set is effectively minimal using several moveable scenic pieces and some furniture.  The colors reflect the atmosphere associated with Florida life. Jan Caprio’s vibrant  costumes complement the set while the lighting by David Lander lends a Florida glow to the proceedings.  Alexander Sovronksy’s music selections set the tone for each scene and transitions.

Boca is a delightful summer show that explores the choices confronting an aging population as they try to wring out every bit of happiness in an artificial Eden.

Take six superb actors, one savvy director, one crackerjack technical staff, and whadda you got? At Barrington Stage, you got one delectable confection of a show, just what the doctor ordered for a soothing distraction from the hard-edged summer of 2021.

BOCA, written by Jessica Provenz and commissioned through the Sydelle Blatt New Works Commissioning Program, is presented in two acts, each consisting of six vignettes. Set in an exclusive senior community in sunny Boca Raton, Florida, these 12 slices of life build on the relationships of 12 residents. Each actor plays two characters. (Does Provenz have a thing for the number six? Should I have consulted a numerologist before writing this review? No matter. Eventually it all gets solved.)

Director Julianne Boyd deftly moves the action at a nimble pace. There’s no lag between scenes as the actors rearrange the furniture in Brian Prather’s picture-perfect set, so we are easily transported from club to condo to car, and it’s a fun ride. It’s not without potholes, however. My earlier mention of “…just what the doctor ordered…” was a wink at Neil Simon, who was called “Doc” by his friends. His influence on Provenz is palpable. The script, not unpredictably, contains lots of familiar “old people” jokes, “old Jewish people” jokes in fact, although the characters are ostensibly an ethnic mix. I felt somewhat wary as I took my seat, because I expected a barrage of what often passes to be humor about older people doing things that would otherwise be considered normal, like having sex and enjoying marijuana. But while the show is brimming with sex and marijuana and a bunch of other “undignified” activities, I rarely felt the references were patronizing.

Sure, the script is often contrived, and is not dissimilar to a television sitcom. But the outstanding actors bring the material up several notches, and they are so much fun to watch. Especially memorable for me was Debra Jo Rupp’s Susan, an upscale retired Kindergarten teacher hailing from Connecticut. I’ve known a few retired Kindergarten teachers, and I can testify that their habit of talking to peers as if they were unruly children is probably not conscious, but deeply ingrained (and unintentionally funny). Rupp nailed it. Her use of “Mr. Noodle,” a disciplinary hand puppet, is priceless.

Truly, every doublecast cast member is a stitch, and kudos to Boyd for bringing these well-established actors to her stage. Jen Caprio’s costumes were spot on for each of the twelve characters, as were Mary Schilling-Martin’s wigs. David Lander’s lighting design shifted perfectly from scene to scene, enhancing the action as well as the visual merriment. Kudos, too, to Alexander Sovronsky for his excellent sound design, which compliments the charmingly upbeat Mo’s (Kenneth Tigar) fondness for bursting into Baby Boomer top 40 hits.

So do yourself a favor and go. It’s good to laugh, especially during these strangely unpredictable times.

For information and tickets go to their website  at:  www.barringtonstageco.org or call 413-236-8888.