REVIEWS: “Shakespeare’s Will” at Oldcastle 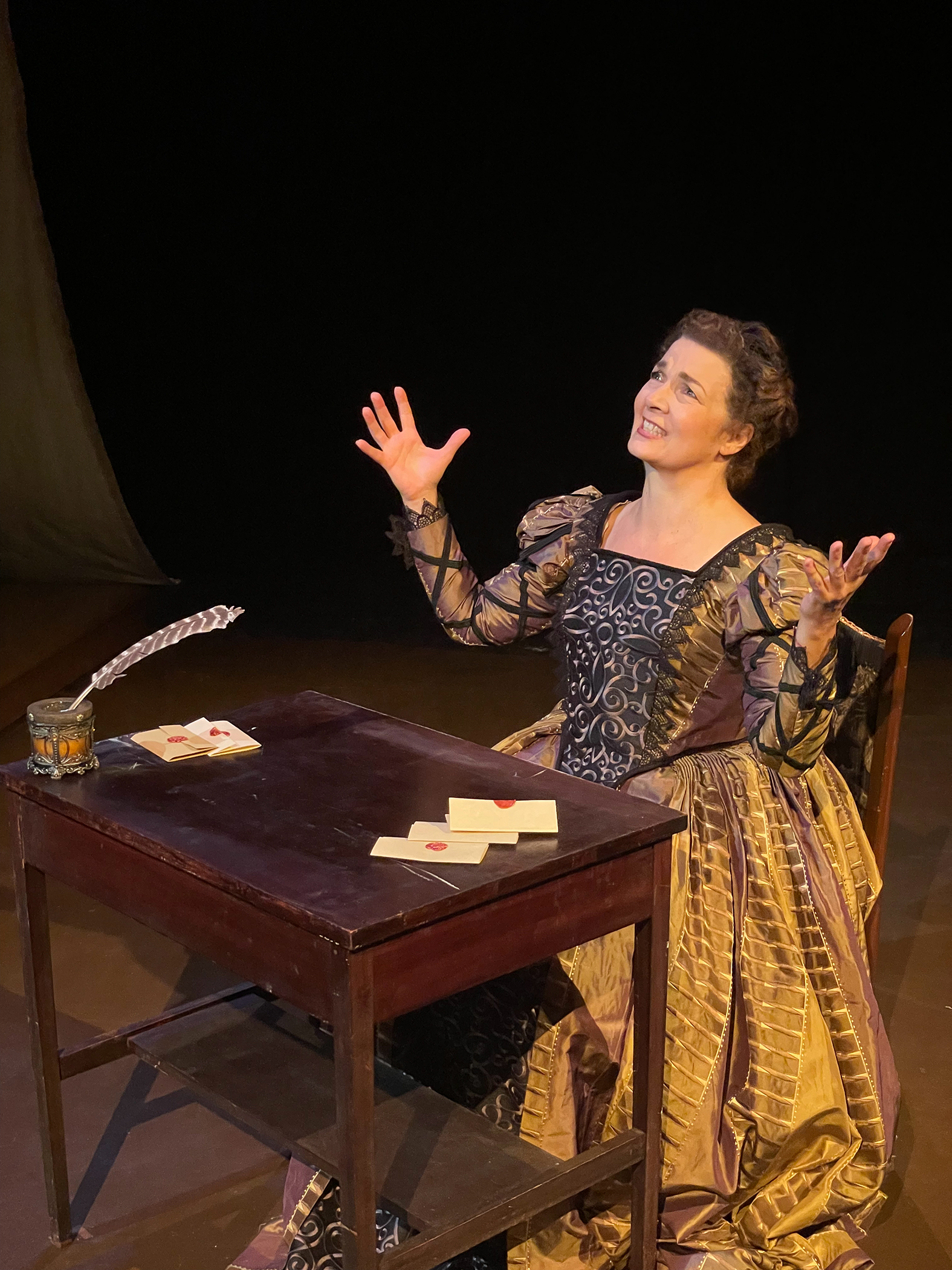 REVIEWS: “Shakespeare’s Will” at Oldcastle

Undoubtedly, William Shakespeare is one of the most intriguing figures in history and literature. Our fascination is due, in part, to the paucity of verifiable information on the life of the world’s greatest playwright. Even fewer facts are known about his wife, Anne Hathaway. So, SHAKESPEARE’S WILL, by Vern Thiessen, fills in the blanks with an historical fiction that is totally hypothetical but intriguing and marvelously entertaining. The play is a fine choice for the Oldcastle Theatre Company, which has been producing theatre in Bennington, Vermont, since 1972.

Katrina Ferguson plays Anne in this solo piece under the capable and nuanced direction of Oldcastle’s Artistic Director, Nathan Stith. The play transports us to Stratford-Upon-Avon on April 23, 1616—the day Shakespeare died. From there the audience is taken on a rich journey as Anne recalls her life with (and without) her famous husband. It is a compelling and highly dramatic journey—a rich experience of emotional highs and lows that makes great theatre.

Thiessen’s play is poetic and feels authentic, even though we cannot know if the narrative is true. We just don’t know why Shakespeare married at age 18 to a woman aged 26 and then left her and his three children in Stratford while he made his indelible mark on the world in London. As director Stith writes in his director’s notes, Thiessen “imagines one possibility.” The conjecture is captivating. The plot (or perhaps “dramatic arc” is more appropriate here as there is very little plot) begins with Anne at home after the funeral, with the scrolled will of her departed husband lying unopen on her desk. She handles her grief by going through her life story, which encompasses remarkable joy, drama, and sorrow. When she finally reaches the present moment, she reveals the will. It is both shocking and enlightening about the life she has led.

One can hardly imagine a better actor for the role of Anne than Katrina Ferguson. Any one-person drama is difficult enough, but performing an historical figure brings with it the possibility of preconceptions that can color the audience response. Ferguson takes on the challenge and uses her deeply resonant voice and expressive body to create a veritable world of characters. From the juvenile and taciturn Will Shakespeare, to her blustering father, and to Will’s sister, the sniveling, snide Joan. Ferguson is a master of clarity in performing dialogues between two characters—never failing to sharply define first one and then the other—and all quickly and ever so articulately. She embraces the quiet, subtle moments and revels in the larger lusty Renaissance earthiness with equal self-assurance.

Nathan Stith’s direction also shows a sure hand, making economical choices that ensure we know where we are and what is happening each moment. Sound is used to great effect—whether it is the rain or the coach on the cobblestones or the baby’s cries. Each vignette transports us to an imagine moment of history. The script’s greatest failing is that there can be a sameness to the narrative. After all, Anne Hathaway lived years and years without Shakespeare and it makes us yearn to know more about him. Thiessen’s characterization presents the Bard as a cold and selfish figure that remains opaque. But Stith has made the most of Anne’s story—using a few simple props and evocative lighting, music and sound to bring Anne’s story to life. Anne’s remembrance of fleeing the plague was especially effective and lent new import to a play that was created before the world encountered Covid-19.

Set designer Richard Howe provides a simple and functional set which is brought to life by lighting designer David V. Groupé’s evocative and emotional lighting. Costume designer Ken Mooney dresses Anne in full Renaissance garb that is authentic, functional, and beautiful. The sound score by Cory Wheat (and as incorporated by director Stith) is superb, helping create the moments of Anne’s life feel authentic. Wheat also created original music for the play and the entire score is marvelously presented in a well-balanced sound system so the effects support but do not intrude.

The opening night audience of SHAKESPEARE’S WILL responded enthusiastically to this piece of metatheatre. It is a most entertaining evening of theatre, providing laughter, joy, and pathos, and well worth the trip up to Bennington.

We know very little about William Shakespeare’s wife, Anne Hathaway. History tells us that she was a bit older than he; they married in 1582, when he was 18 and she, 26. She was pregnant with their first child, Susanna, when they wed. Two years after Susanna’s birth, their twins Hamnet and Judith were born. We know that Anne lived with the children in Stratford-Upon-Avon, while her struggling poet-playwright husband spent most of his adulthood in London, eventually achieving fame and success before returning to Stratford for about six years until his death, in 1616, at the age of 52.

What is indisputable is that William Shakespeare had a will, which exists in the U.K.’s National Archives. The will is an example of a standard 17th-Century document drawn by a lawyer.

Canadian playwright Vern Thiessen’s one-woman show, Shakespeare’s Will, is of course based on conjecture and assumptions. Given the few historical facts, any literature about Anne Hathaway, dramatic or otherwise, would have to be. As Anne, Katrina Ferguson is a commanding presence onstage, energetic, engaging, handsome, and stylish in her gold bodice and skirt (elegantly designed by Ken Mooney).

While I found Ferguson’s performance dynamic, I never felt I was witnessing Hathaway. Thiessen’s script, while interweaving these assumptions with a few slight threads of fact, seems to be about another woman entirely. She behaves as a cheerfully bawdy wench, telling us about her sexual adventures. There’s no shortage of such delightful characters in Shakespeare’s canon, but I find it highly unlikely that Hathaway shared those characteristics. The eldest of eight children, she grew up in a spacious farmhouse on a large parcel of land about a mile away from Stratford. (Her family lived there for 13 generations, and today it is a popular tourist attraction.) It’s safe to assume that like most women of her day, she rarely ventured from her home, was illiterate, and shared household and child-rearing duties. William Shakespeare would visit this family home when he courted her. “I like the company of lots and lots of men,” declares this version of Anne. Really? How and where did she find all these men?

After they married, as was customary, the couple moved into the Shakespeare family home in Stratford. It is certainly possible that Anne had challenging relationships with her in-laws. However, when Ferguson loudly proclaimed “Joan (her sister-in-law) is a bitch!” several times, I cringed, andnnot because of the word. Surely, I thought, the use of “bitch” as an insult to women originated long after the 16th to 17th Centuries. My research tells me that the pejorative use of the word took off between 1915 and 1930, and skyrocketed with women’s suffrage. Too often contemporary colloquialisms and slang are tossed around in this play, to a very jarring effect.

In his Director’s Note, Nathan Stith observes that  “…this beautifully poetic piece is filled with contemporary resonances, especially given the events of the last eighteen months.” I would argue that any good play must resonate with contemporary audiences, and should do so by remaining true to its own time and place. There were frequent deadly bouts of the bubonic plague during Hathaway’s life. Obviously we are going to be reminded of the current pandemic. Thiessen does a good, disturbing job of describing through Hathaway the horrors the deadly breakout inflicted. It is a matter of record that Hamnet died at the age of 11. Thiessen has him drowning in the ocean as his inconsolable mother realizes he has suddenly disappeared from her view. Ferguson courageously embodies the grief-stricken mother, and it’s apparent that Stith gave her some inspired direction during the scene of the death of her son. Yet I feel that the playwright chose a rather obvious and manipulative device here. There is no known record of the cause of Hamnet’s death. It was likely due to the plague.

David V. Groupe’s lighting design neatly collaborates with the script in propelling us from scene to scene. Cory Wheat has masterfully designed the sound, although I’m undecided as to whether some of the sound choices (for example, a baby’s cry as Ferguson cradles a white towel, which she then casually tosses onto a piece of furniture) undermine rather than enhance Ferguson’s performance. Richard Howe’s set is beautifully crafted, and aided by Groupe’s lighting changes, travels seamlessly from scene to scene.

I hope to see Ferguson in another role in the not-too-distant future, because I suspect she’s a powerfully spirited actress when armed with a better script.