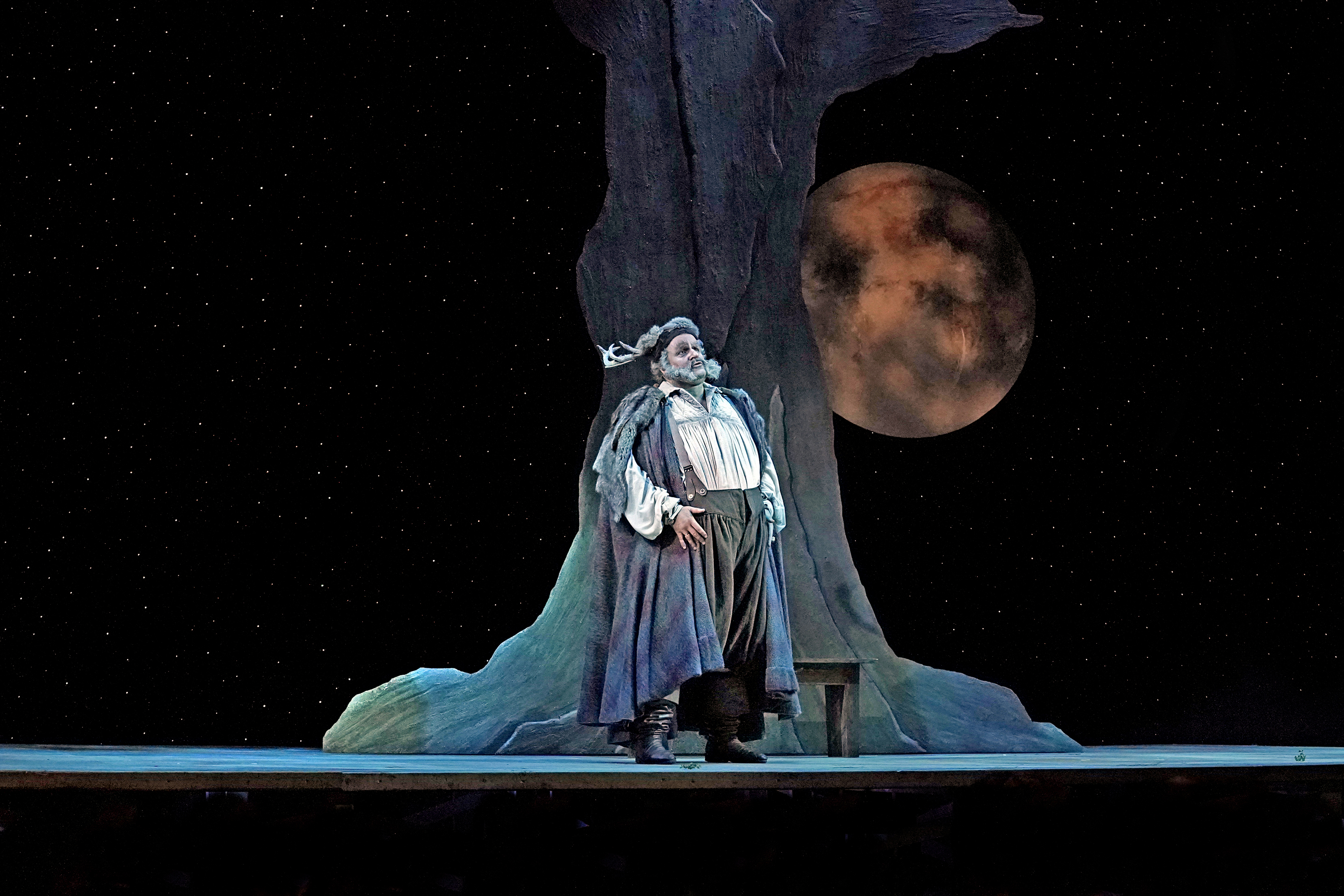 Who would have believed that here in the Berkshires we would have our own opera festival showcasing talent from all over the world, including the MET and Italy’s La Scala?  Thanks to co-founders Brian Garman (Artistic Director) and Jonathon Loy (Director of Production), Berkshire Opera Festival presented its first summer season in 2016 with Madama Butterfly, and has returned every year, with the exception of 2020, when, because of the pandemic, they canceled a production of Mozart’s Don Giovanni, which will thankfully be rescheduled for 2022.Currently, in 2021, the BOF has given us its largest indoor full capacity summer season, with Verdi’s Falstaff  as its crown jewel, at the Mahaiwe Performing Arts Center in Great Barrington.  And what a spectacular production it is!

In an August interview with The Boston Globe, Maestro Garman described the crisis the company faced as COVID-19 threated to destroy what they had built:  “We were scared to death every day that this would be the end of the company.  We honestly did not know if we would make it through.”  But thanks to grants and to their devoted, generous donors, they began to plan for this season, which presented its own challenges:  “You’d put something together and two weeks later the shape of the pandemic would change or the state’s guidance would change, and you’d have to tear it up and start over.”  The miracle is that despite the ongoing obstacles, the BOF was able to produce a small-cast opera in July at Bard’s Daniel Arts Center, Glory Denied, a free concert of songs inspired by Shakespeare’s plays (Much Ado About Shakespeare) at The Mount in Lenox, and the glorious Falstaff.

Verdi’s last opera, and only his second comedy (the first having flopped at La Scala after only one performance), Falstaff premiered in 1893 when he was eighty-years old.  It was a young librettist, Arrigo Boito, who coaxed Verdi out of a thirteen-year retirement to compose Otello in 1887 (no stranger to Shakespeare, Verdi had composed Macbeth forty years earlier).  Following that success, Boito persuaded Verdi to compose this comedy based (sometimes word for word) on Shakespeare’s The Merry Wives of Windsor, with excerpts from Henry IV Parts I and II.  Falstaff  is unique in many ways:  it has no overture; it’s action-packed, fast-moving and naturalistic; instead of long, repetitive arias that display the vocal talents of the singers, it integrates the orchestra with the singing; focusing on the advancement of the story and the characters, the orchestration mirrors the physicality of the comedy; and the finale is a dazzlingly difficult fugue (a Baroque form rarely heard in Italian opera) used to comic effect, assuring us that all the world is a joke peopled with fools.

Who is Sir John Falstaff?  According to the late literary critic, author and scholar Harold Bloom, Falstaff is “the grandest personality in all of Shakespeare.”  He is a grossly overweight knight, surprisingly clever though he acts clownish, very witty—able to inspire wit in others, a vaudeville comedian, quick-thinking, always good company, great at insults, accepting his faults with good humor, possessing a zest for life, he’s an endearing thief, liar, a boastful coward, a drunk, and a terrific storyteller.  In the two parts of Henry IV, he serves as a sort of mentor to Prince Hal, who must eventually reject him and his pranks in preparation for ascending the throne as Henry V. In The Merry Wives of Windsor, a play supposedly requested by Queen Elizabeth I, who wanted to see Falstaff again onstage, our trickster attempts to fill his purse by seducing two wealthy married women.  He sends them identical love letters but the women discover his scheme and plot their revenge.

Maestro Garman, conductor of Falstaff, tells The Boston Globe in an interview that this opera is “perhaps the very greatest of all the Italian operatic comedies.  When you pair Verdi and Shakespeare, the result could only be extraordinary.”  Actually, thanks to Verdi and Boito’s streamlining of The Merry Wives of Windsor, a sprawling play with 23 scenes, the opera has been far more successful than the play, seen pre-pandemic at Shakespeare and Company in Lenox.  BOF’s extraordinary production drives home Garman’s point.

The first two rows of seats at the Mahaiwe have been removed in order to accommodate the rousing thirty-two-piece orchestra. The cast is comprised of ten singers and a sixteen-member chorus.  Once the renowned baritone Sebastian Catana (who sang Rigoletto for the BOF in 2018) let Garman know that Sir John was his dream role, the idea of producing this opera took hold.  In order to cast world-class singers, especially those with powerful “Verdian voices,” Garman needed to hire the performers years in advance, which he did. The other celebrated Verdi singer in the cast is Tamara Wilson, playing Alice Ford, the wife who tricked the trickster.  She and Catana have performed several Verdi operas together, including her signature role:  Aida. She loves playing a comic character, admitting to The Berkshire Eagle:  “The minute this is over I go back to killing people and dying.” These exceptional singers are also superb comic actors.

Other standouts in the cast include Jasmine Habersham, who plays Nannetta, the daughter of Alice Ford and her jealous husband.  The lyricist Boito describes Nannetta and her lover Fenton (Jonas Hacker) in this way: “I would like as one sprinkles sugar on a tart to sprinkle the whole comedy with that happy love.”  Thomas Glass as Mr. Ford alternates deliciously between congratulating himself on hoodwinking Falstaff and falling prey to a jealous rage when he believes himself to be cuckolded by Sir John.  Alissa Anderson is a wonderfully funny Mrs. Quickly, the messenger who convinces Falstaff to tumble right into Alice Ford’s trap; and Max Jacob Zander as Bardolfo is not only a singer but an acrobat, excelling in pratfalls and comic business with his counterpart, Jeremy Harr as Pistola.

One of Garman’s best decisions is his choice of Joshua Major, the Toronto-born director and Chair of Opera Studies at the New England Conservatory, whose staging of Falstaff is impeccable.  Helped by Stephen Dobay, the creative set designer, Major faced multiple challenges:  every set change in this nonstop-action comedy is accomplished in full view of the audience by costumed stagehands; characters had to be hidden (and often popped back up) by large screens, walls covered in grass, under tables, and inside a laundry basket; the raised wooden platform serving as the stage had to accommodate the whole cast on and below it in the final scene; and in order to identify where each scene takes place, Major cleverly uses signs, as in silent film, mounted on a stand.  Every opportunity for comedy is exploited by this director and cast, adding to the pleasure of a delighted audience.

Charles Caine, who was the resident costume designer at the Metropolitan Opera, has his hands full with this splendidly costumed production.  Especially effective is Falstaff’s pink and white extravaganza as he goes to court the ladies, and the nocturnal masque at the end, with every character disguised as either a sprite, goblin, witch, or fairy (or even a monk), embellished by Beckie Kravetz’s hair and makeup design.  Lighting designer Alex Jainchill not only adds to the beauty of the stage pictures with his gorgeous colored lights but also uses his craft to  delineate and clarify each location.  Finally, the contributions of Geoffrey Larson (Chorus Master and Assistant Conductor), Christopher Koelzer (Musical Preparation), Nate Raskin (Principal Pianist and Coach), and Noah Palmer (Chorus Rehearsal Pianist) cannot be overstated.

There are only two more performances of this magnificent production:  Tuesday 8/24 and Friday 8/27.  Do not miss it!

Verdi’s FALSTAFF runs from August 21 through August 27–Saturday at 1:00, Tuesday and Friday at 7:30 pm at the Mahaiwe Performing Arts Center, 14 Castle Street, Great Barrington, MA.  For tickets call 413-528-0100 or online at http://www.berkshireoperafestival.org.&nbsp;

BEFORE ENTERING THE THEATRE, YOU MUST SHOW I.D. AND PROOF THAT YOU HAVE BEEN VACCINATED.