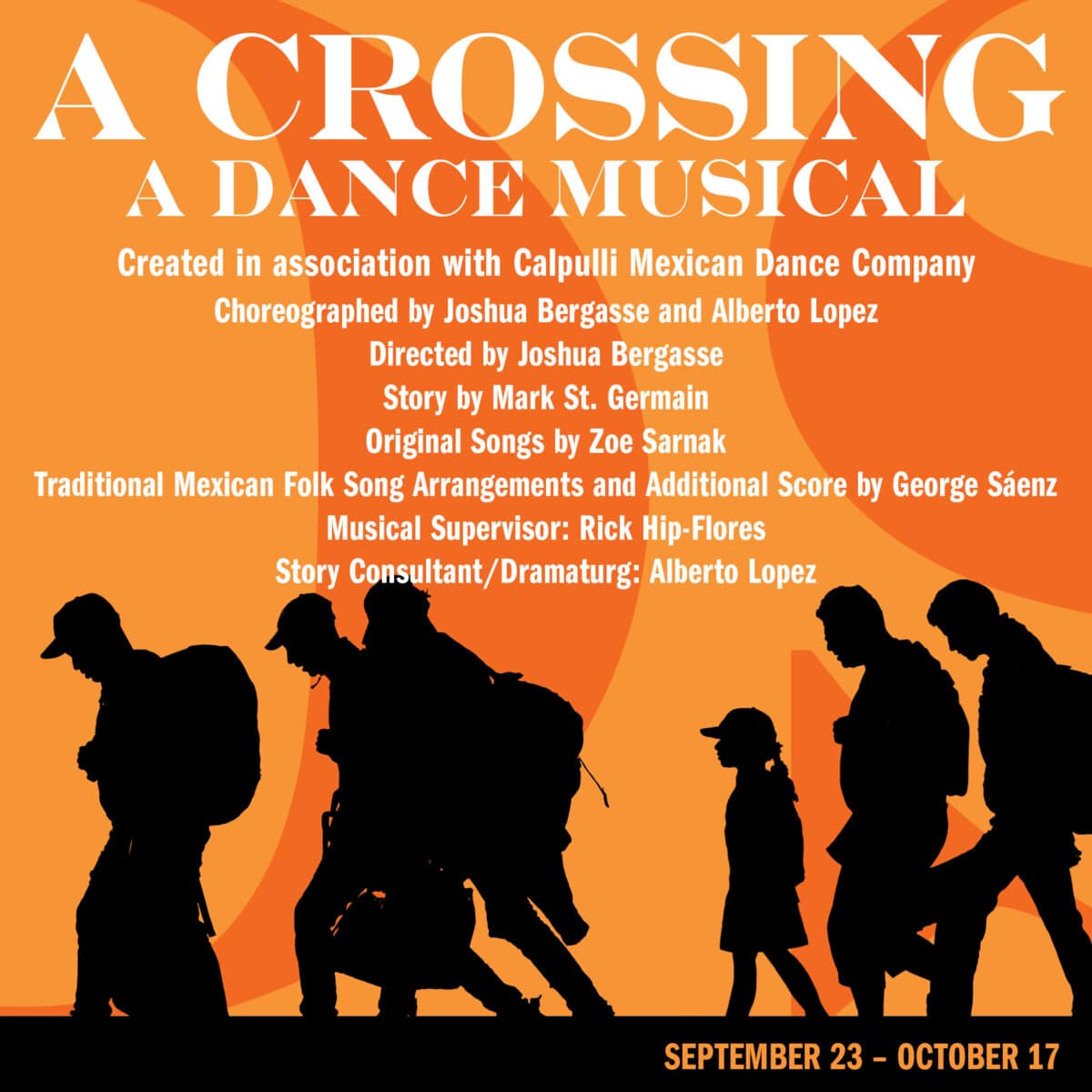 (Pittsfield, MA – August 26, 2021) – Barrington Stage Company (BSC), under the leadership of Founder/Artistic Director Julianne Boyd, is pleased to announce casting for the final production of the Boyd-Quinson Stage 2021 season: the world premiere of A Crossing – A Dance Musical, created in association with Calpulli Mexican Dance Company. Performances begin September 23, and the production runs through October 17, 2021. A Crossing was commissioned through the Sydelle Blatt New Works Commissioning Program.

Pulsing with energy and emotional intensity, this story about a group of migrants crossing the southern border is raw, visceral and electrifying — demonstrating the personal impact of crossing an “invisible line.” The group faces many dangers, including the coyote — a human smuggler. This new dance musical ingeniously combines compelling lyrics, athletic choreography and elements of Mexican folk music to tell a remarkable tale of courage, fear and struggle.

Ticket prices for A Crossing are $25-$79. Preview performance tickets for all shows are $25/$35. Tickets can be purchased by calling 413-236-8888 or visiting BarringtonStageCo.org/Tickets.

In order to offer patrons the safest and most enjoyable experience possible, the following standards will be in effect at all venues and applicable to all patrons, staff and volunteers throughout 2021 until further notice.• As of Friday, August 13th, all patrons must provide proof of vaccination or proof of a negative Covid test (PCR test within 72 hours or an antigen test within 6 hours) and a form of identification prior to entering the theatre.• All parties will be required to sign a waiver in order to enter the venue.• No food or beverages will be permitted. Concessions will not be available.• All tickets will be electronic.• Patrons will be asked to sanitize their hands with the provided hand sanitizer prior to being seated.• After being shown to their seats by an usher, we ask that all patrons stay in their seats and not mingle with other patrons for the safety of all.

The following changes have been made to the Boyd-Quinson Stage:• There will be 2 vacant seats between each party. No actor will come within 10 feet of the first row of the audience.• The entire theatre will be sanitized just prior to each performance using a combination of hi-tech electrostatic sprayers, disinfectant sprays and wipes.• The Boyd-Quinson now uses MERV-13 filters that will be replaced monthly. Every night the entire theatre will have 100% of the air inside purged and swapped with 100% fresh air from outside. During performances, the ratio to fresh outside air to recirculated air will go from 20:80 to 50:50.• Multiple entrances for patrons will be employed based on seating locations to minimize contact between patrons.

Barrington Stage Company (BSC) is an award-winning theatre located in Pittsfield, MA, in the heart of the Berkshires. Co-founded in 1995 by Artistic Director Julianne Boyd, BSC’s mission is to produce top-notch, compelling work; to develop new plays and musicals; and to engage our community with vibrant, inclusive educational outreach programs. BSC attracts over 60,000 patrons annually and has gained national recognition for its superior-quality productions and comprehensive educational programming, including the award-winning Playwright Mentoring Project, the Musical Theatre Conservatory, Youth Theatre, KidsAct! and other initiatives. The company has become integral to the economic revitalization of downtown Pittsfield.  BSC’s reputation for excellence began with a smash revival of Cabaret that moved to Boston in 1997 for an extended run. The theatre’s prominence grew with the world premiere of The 25th Annual Putnam County Spelling Bee by William Finn and Rachel Sheinkin (BSC 2004; Broadway 2005-2008, winner of two Tony Awards). Other notable productions include the world premiere of Christopher Demos-Brown’s American Son (BSC 2016; Broadway 2018); Mark St. Germain’s Freud’s Last Session (BSC 2009; Off-Broadway 2010-2012); Leonard Bernstein, Comden & Green’s On the Town (BSC 2013; Broadway 2014, four Tony Award nominations); Stephen Sondheim and George Furth’s Company, starring Aaron Tveit (BSC 2017); and West Side Story in honor of Leonard Bernstein and Jerome Robbins’ centenaries (BSC 2018).  BSC develops and commissions new work with two programs: PlayWorks, which supports the creation of new plays, and the Musical Theatre Lab, which develops new musicals. Since 1995, BSC has produced 38 new works, 19 of which have moved to New York and major US regional theatres.  Following the industry-wide shutdown due to the coronavirus pandemic, BSC was the first Equity theatre in the US to return to live performance with its critically acclaimed production of Harry Clarke, starring BSC Associate Artist Mark H. Dold and directed by Ms. Boyd. The season also included the acclaimed concerts, The Hills Are Alive with Rodgers & Hammerstein and Leslie Kritzer: Is It Over Yet?, the virtual benefit reading of Rob Ulin’s new play Judgment Day, a virtual staged reading of the new play Eleanor by BSC Associate Artist Mark St. Germain, a reading of Three Viewings by Jeffrey Hatcher, a reading of St. Germain’s Typhoid Mary, and BSC’s Holiday Getaway. This year, the company’s streaming productions also have included the critically acclaimed 10th anniversary 10×10 New Play Festival, and readings of the commissioned work Mother’s Day by Bekah Brunstetter, the Barrington Stage Company’s Youth Theatre’s production of The Laramie Project, and the Grand Prize Winner of the 2021 Bonnie and Terry Burman New Play Award, Get Your Pink Hands Off Me Sucka and Give Me Back by Daniella De Jesús.