REVIEW: “Ethel Waters: His Eye is on the Sparrow” at Capital Rep 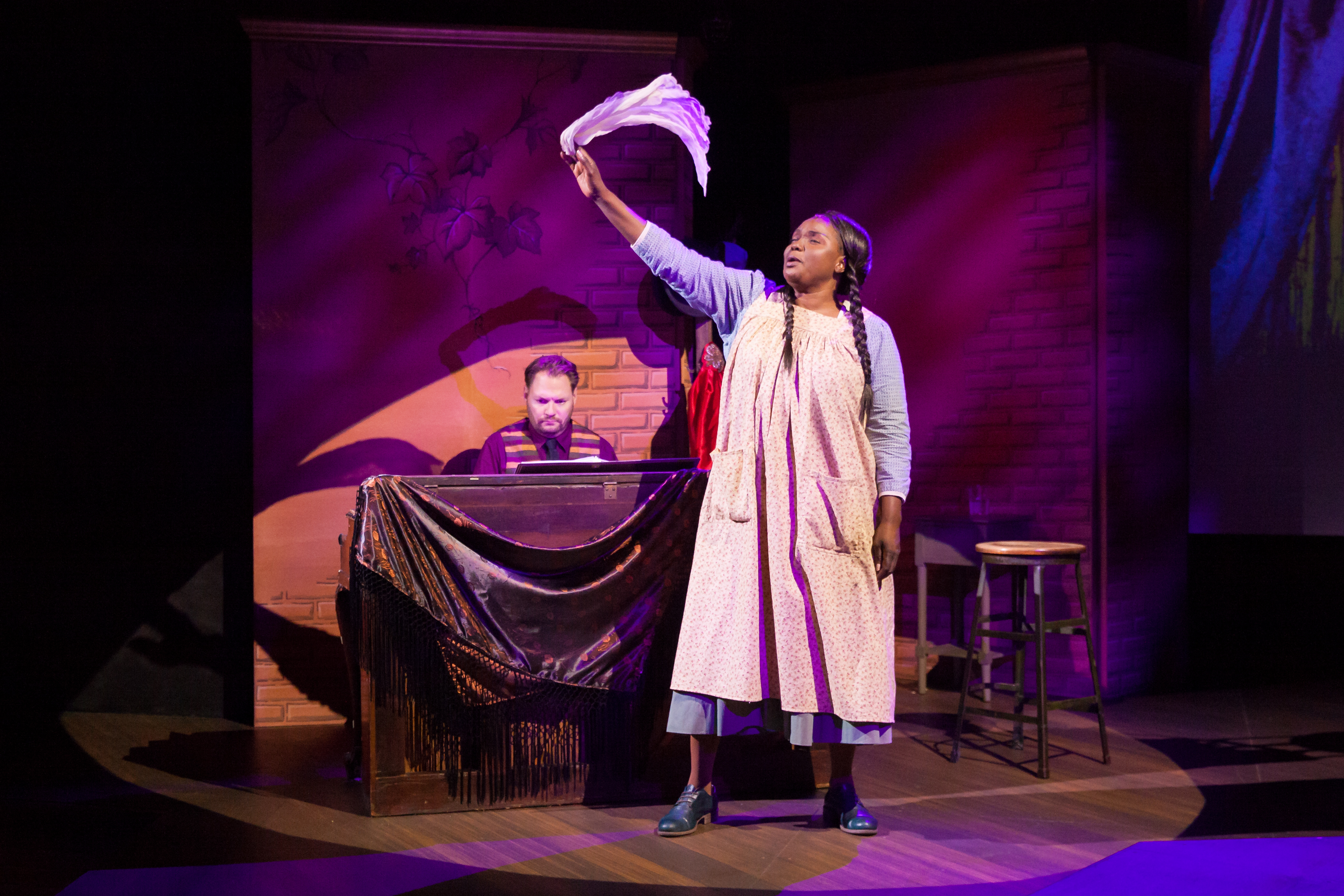 REVIEW: “Ethel Waters: His Eye is on the Sparrow” at Capital Rep

I don’t think it’s possible to watch Jannie Jones on stage without being utterly beguiled. The actress kicked off Capital Repertory Theatre’s inaugural season, starring in Ethel Waters: His Eye is on the Sparrow. Written by Larry Parr in 2005, the play is a musical biography of the star of stage and screen, and Jones, with her remarkable energetic intensity, is a wonder to behold.

Ethel Waters (1896-1977) was the daughter of a 12-year-old whose pregnancy was the result of a rape. Her mother was largely absent from her life. She grew up in Chester, Pennsylvania, living with her unaffectionate grandmother in poverty, never living in the same place for much more than a year. She attempted to escape by getting married when she was 13 years old, but she soon found herself violently abused by her husband. She left him and found work in a Philadelphia hotel. On her 15th birthday she attended a party at a club where she was persuaded to sing a few songs, and so impressed her audience that she was offered a professional singing job in Baltimore. Eventually she moved to Harlem, where her nightclub appearances would lead to work on the vaudeville circuit. From there she was offered work on Broadway, soon becoming one of the highest-paid actresses of her time, and from there, Hollywood beckoned. A trailblazer, she was the first Black woman to integrate a Broadway show. She was the first Black woman to host her own radio show. She was the first singer to perform many songs we today associate with others, including “Heat Wave,” “Stormy Weather,” and “Dinah.”

Directed with a sure hand by Maggie Mancinelli-Cahill, Jones guides us through Waters’s difficult, eventful life from her girlhood through maturity at a crackling pace, delivering a glorious variety of songs with the accompaniment of the splendid pianist/musical director Josh D. Smith. Jones and Smith make a wonderful team. I did have a bit of trouble hearing Jones’s spoken dialogue over the piano accompaniment, and found myself wishing the volume of the piano weren’t quite as high. But, oh! The music! From the exquisite titular gospel song, through the compositions of Fats Waller, Hoagy Carmichael, Irving Berlin, and other contributors to the American songbook, Jones demonstrates an ability to transmit her deeply felt connection, reinvigorating sassier numbers like “Heat Wave,” eloquently bearing the profound pain of “Black and Blue.”

The depth and breadth of Jones’s singing voice is remarkable, beautiful. Sue Caputo’s choreography capitalizes on Jones’s grace, as does Mancinelli-Cahill’s direction; the 90-plus minutes of performance fly by. She quickly disappears and reappears in lush costumes (designed by Florida Studio Theatre and Andrea Adamcyzk) on S. Anthony Panfilli’s clever, evocative set. Also noteworthy is the high creative caliber of the others on the technical team, with lighting design by Travis McHale, projection design by Nathan Scheuer, and sound design by Rider Q. Stanton.

Capital Repertory Theatre was preparing to move into its spacious new digs when the pandemic struck, and I was delighted to witness the hard-won ribbon cutting ceremony before the show. It’s been a long time coming, and I can’t think of a better show to begin its season.

As of this writing, the theater is observing the following Safety Requirements: In accordance with CDC and NYS guidance, all individuals will need to be fully vaccinated and masked to enter the theatre. As the Theatre notes in its program, “ETHEL WATERS: HIS EYE IS ON THE SPARROW contains references to the harsh treatment that Black Americans experienced in the early 1900s through the 1940s, including sexual and racial violence. The show contains strobe effect and haze.”

The show runs through Sept. 26. The special performance schedule for the show includes six performances a week with no two show days. Regular performances are 7:30 p.m. Tues.-Thurs; 8 p.m. Fri.; 3 p.m. Sat.; and 2 p.m. Sun. There will be one Wednesday matinee at 2 p.m. Sept. 1 and no evening performance. There will be one Saturday evening performance on 8 p.m. Sept. 18 and no matinee performance. The show runs 90 minutes without an intermission. Tickets range from $22 to $52. Reservations may be made online at www.capitalrep.org or by calling the box office from 10 a.m.-2 p.m. weekdays at (518) 346-6204. Tickets may also be reserved in person at the box office two hours before show time Tuesdays through Sundays.

ETHEL WATERS: HIS EYE IS ON THE SPARROW